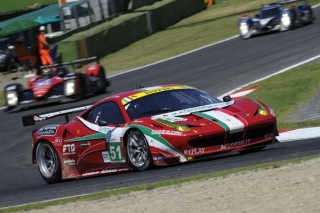 ILMC – Ferrari one-two on the banks of the river Santerno 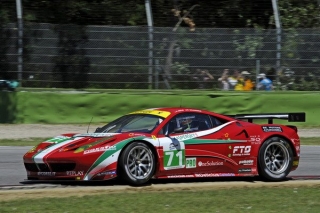 Maranello, 3 July – Ferrari’s adventure in the Imola 6 Hours, the fourth round of the Le Mans Series and also of the Intercontinental Le Mans Cup ended with a one-two finish. Honours in the GTE Pro class were hotly contested with the top spot going to the AF Corse 458 Italia GT2, driven by Jaime Melo and Toni Vilander, who led home the sister car of Giancarlo Fisichella and Gianmaria Bruni and in third place, the BMW M3 driven by Augusto Farfus and Jörg Müller. With fifty minutes to go, the two red cars were solidly in the lead, with these two top places seeing Ferrari moving into the lead of the Constructors’ classification and consolidating AF Corse’s advantage in the Teams category. Fisichella and Bruni were particularly pleased, having staged a major fight back after a difficult start, which had seem them leave the line from seventh on the grid. “”We definitely could have won, but for an electrical problem which affected our car during the final laps,” said Fisichella. “But I am nevertheless very happy with this result for me and for the whole team. The way qualifying went did not lessen our expectations, as we knew we could do well and we proved that to be true. The entire team was exceptional as usual.”

Those in the GTE Am category were less fortunate: the Marco Cioci, Piergiuseppe Perazzini and Stephane Lemeret F430 GT2 started from second, but had to settle for a fourth place finish behind the two Porsche 911s of Raymond Narac-Nicolas Armindo and Patrick Long –Gianluca Roda and the Corvette C6 of Patrick Bornhauser – Julien Canal – Gabriele Gardel. Competitors now face a long summer break until the next round in the UK, at Silverstone circuit over the weekend of 11 September. 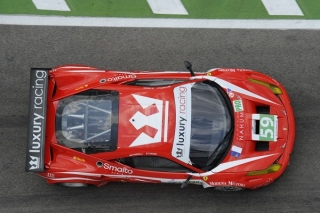 Maranello, July 2 – The Ferrari 458 Italia GT2 of Jaime Melo and Toni Vilander took third place in qualifying at the Autodromo Enzo e Dino Ferrari in Imola ahead of tomorrow’s 6-Hour race, the fourth round of this year’s Intercontinental Le Mans Cup. On the famous Italian circuit the BMWs of Augusto Farfus-Jörg Müller (1.44.468) and Pedro Lamy-Dirk Werner (1.44.683) topped the GTE Pro category ahead of the number 71 car prepared by AF Corse (1.44.691). The other Ferrari 458 Italia GT2 run by the Piacenza team, driven by Giancarlo Fisichella and Gianmaria Bruni (1.45.130), was only seventh despite having dominated yesterday’s free practice and been very quick in this morning’s practice session. The changing conditions of the track created some oversteer problems but the Roman duo hasn’t lost hope of doing well in tomorrow’s race which gets under way at 1200.

The F430 GT2s entered in the GTE Am category did well with the car driven by Marco Cioci-Piergiuseppe Perazzini-Stéphane Lémeret second (1.45.906) ahead of the other red car driven by Michele Rugolo-Niclas Jönsson-Tracy Krohn (1.46.219). The class pole went to the Porsche 911 of Patrick Long and Gianluca Roda (1.45.650). 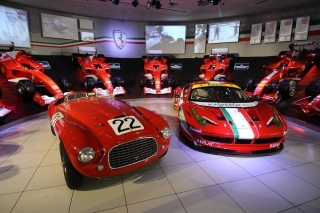 Maranello, 28 June – The victory room at the Ferrari Museum was the setting for a press conference organised by the Intercontinental Le Mans Cup and the Automobile Club de L’Ouest to present this weekend’s Imola 6 Hours, the fourth round of the series. The museum therefore chose to display the 166 MM which won the 1949 Le Mans 24 Hours, testament to the historic links between the Maranello marque and the legendary endurance race. Alongside this car from the past was the very latest 458 Italia GT2, run by the AF Corse team in the intercontinental series. Taking part in the conference were Frederic Henry-Biabaud, the ILMC general manager, Antonello Coletta, Head of Ferrari Corse Clienti, AF Corse drivers Giancarlo Fisichella and Gianmaria Bruni and their team principal Amato Ferrari as well as Walter Sciacca, director and managing director of the Imola circuit.

Henry-Biabaud opened proceedings, stressing the importance of having a Ferrari presence on the entry list. “It is a great privilege for us to welcome Ferrari to our championship, which is born out of a desire to promote the spirit behind the Le Mans 24 Hours in one unique international competition. Ferrari is universally recognised as one of the most prestigious marques in the world and boasts some true endurance professionals in its driver line-up.”

“It is definitely equally important for Ferrari to be part of this prestigious series,” echoed Antonello Coletta. “We have believed in it right from the start. When the idea of this championship was born last year, we immediately realised that for us and our GT cars, it would be a challenge we could not afford to miss. Ferrari’s history is not just about Formula 1 and our legend also owes something to the Grand Touring races.” Coletta also chose to comment on the new FIA Endurance World Championship which gets underway in 2012, replacing the current ILMC. “We will return to having a World Championship which is an added value for us as it will see us take on new opponents, even if I can say with pride that our cars are among the best and the teams that fly our colours are among the most professional. One only needs to look at the results: last year, we won the first of these championships and here we are off the back of the Le Mans race that we led up until the twenty second hour. Unfortunately, victory slipped from our grasp when we thought it was ours, but we are working very hard to give all the necessary support to our customers, which will also be the case in the world series in the future.”

The imminent challenge awaiting Ferrari is the Imola 6 Hours in which it has ten cars taking part; six Italia 458 GT2 and four F430 GTC, split between the Pro and Am categories. Of those entered, AF Corse is the team that has made the biggest contribution to winning important titles for the Maranello company and, with the help of drivers of the calibre of Giancarlo Fisichella and Gianmaria Bruni will try and consolidate Ferrari’s lead in the constructors’ classification. “We are definitely confident of matching last year’s performance and once again fighting to win the title for Ferrari,” said team principal Amato Ferrari.

Giancarlo Fisichella seems equally confident in this his second season driving for the Piacenza-based team. “This year I feel I have got more experience and certainly I have a closer feeling with the team and the car. With a past career in F1, I had to adapt to a different driving style and a very different race format, trying to find the right compromise to make my contribution to a win which does not just depend on the skill of one driver, but on that of an entire team. I have an exceptional relationship with Gimmi Bruni whom I consider a true master and he has given me invaluable advice in terms of understanding the car and the circuits. Together we have won at Spa, we could have won at Paul Ricard and Le Mans, but we are pleased nevertheless because a lot of work and professionalism has gone into these results. We will definitely try to repeat the sort of performance we showed early in the season when it comes to the Imola race.”

The high level of competition which can be expected in Imola, does not phase Gimmi Bruni either, as he laid out his expectations for this Italian round of the intercontinental championship. “The fight will be very close but we have everything in place to be in the running. For me, it’s a real honour to wear the colours of such a prestigious marque as Ferrari and to race at a technically complex track like Imola.”

The Imola 6 Hours gets underway on Friday with the first free practice sessions, followed by 20 minutes of qualifying on Saturday at 13.55, which will decide the grid for the endurance race that starts on the Sunday at noon.