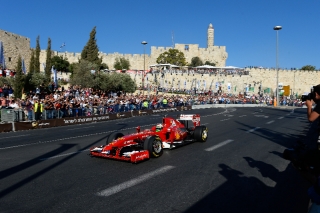 Jerusalem, 13 June – Doing 200 km/h in front of 60,000 spectators made this a special day for Giancarlo Fisichella, who along with his Ferrari F60, were the stars of the first Jerusalem Peace Road Show, an event organised under the aegis of the Jerusalem City Council, supported by Kaspersky Lab, one of Scuderia Ferrari’s most important partners. A crowd of 60,000 turned out to watch the Ferrari driver do a total of ten runs, split into the three parts, along a 2800 metre course, which ran through the hilly streets of the city. Fisichella hit speeds of 200 km/h and delighted the crowd with some burn-outs and simulated race starts. “It was really a fantastic and incredible feeling,” said Giancarlo, as he stepped out of the car. “Driving in front of so many people in such a historic place was very exciting as indeed was visiting the Old City this morning. It’s been a truly memorable day for me.” The event, which continues tomorrow morning, saw other cars do some runs, including four Ferraris that normally take part in the Ferrari Challenge (three F430s and one 458 Challenge,) in the hands of drivers that included promising Ferrari Driver Academy youngster, Antonio Fuoco.

Fisichella in Jerusalem: “a wonderful experience” 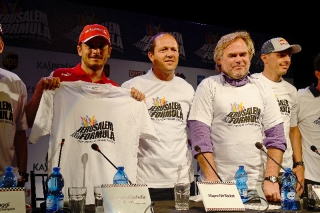 Jerusalem, 13 June – “A wonderful experience,” said Giancarlo Fisichella without hesitation, when describing his second trip to Jerusalem, after he had previously made a flying visit to the city back in March. The Italian driver is in Israel to take part in the first Jerusalem Peace Road Show, an event organised under the aegis of the Jerusalem City Council, supported by Kaspersky Lab, one of Scuderia Ferrari’s most important partners. Before getting into the cockpit of the F60 to tackle a 2800 metre long course through the hilly streets of Jerusalem, Giancarlo visited the Old City along with Ferrari Driver Academy youngster, Antonio Fuoco, who is also taking part in the event at the wheel of a 430 Challenge.

“I’ve seen some incredible sights, fascinating and full of history and I plan on coming back here with my family to visit the city in a more leisurely fashion,” said Giancarlo. “We had a guide who happened to be from Rome, like me and he took us through the streets explaining everything we saw. I have often heard about Jerusalem and its holy sites, but to see them at first hand is a special feeling, which could not be repeated elsewhere.”

“It’s a great honour for me to be here and to drive a Ferrari Formula 1 car in what is such a historic motor sport event in Israel,” continued Giancarlo. “Being behind the wheel of a technological jewel like the F60 in a such a historic venue is an incredible combination and I wish to thank first of all the Jerusalem City Council and Kaspersky Lab, for making it possible.”