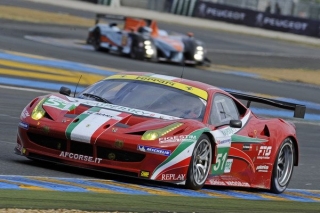 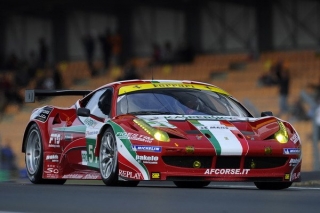 Le Mans, 12 June – The famous Le Mans 24 Hours race, third round of the Intercontinental Le Mans Cup, ended this afternoon with a sense of disappointment in the AF Corse garage: Ferrari number 51 driven by Giancarlo Fisichella, Gimmi Bruni and Toni Vilander came home second in the LMGTE PRO category behind the Corvette of Olivier Beretta, Tommy Milner and Antonio Garcia, which went into the lead two hours from the flag, when a technical problem began slowing the Ferrari more and more, after it had been a front runner for most of the race.

At the start at 15h00 on Saturday, Gimmi Bruni immediately went into the class lead, lapping in quick times. His lead was then wiped out after the accident between McNish’s Audi and the Luxury Racing 458 Italia with Anthony Beltoise at the wheel, as this brought out the Safety Car for over an hour. After eight hours, another Audi, driven by Rockenfeller, collided with the AF Corse Number 71 Ferrari driven by Robert Kauffman and hit the guard rail at around 320 km/h, fortunately without injury. Once again the Safety Car came out, closing up the field yet again. As the race progressed, the hard charging trio of Fisichella-Bruni-Vilander retook the lead after 17 hours, until the car had to make a long stop in the pits because of the technical problem that saw the Corvette move into the lead. The other Ferraris did not fare much better in the marathon event: the JMW Motorsport car crossed the line in ninth place, while the two Luxury Racing cars, the Team Farnbacher entry and the the other AF Corse 458 Italia failed to finish, despite performing strongly, especially in the night time. Some consolation then that the 458 Italia GT3 Number 51 entered by AF Corse, won the Michelin Green X classification for GT cars, proving that the Maranello marque is paying close attention to reducing fuel consumption and CO2 emissions.

We can take some satisfaction from this result, the team and Ferrari,” commented Giancarlo Fisichella after the race. “Second place is always a good result, even if naturally there is some disappointment given that we looked set to take the win. Unfortunately, some problems on the car in the closing stages of the race meant the top spot was out of our reach.”

In the LMGTE AM class, best result was a fourth place in the category for the JMB Racing F430 GTC. Competitors in the Intercontinental Le Mans Cup will be back in action at Imola over the weekend of 3 July for the fourth round of the season, which is also round three of the Le Mans Series.

Le Mans gets serious from the off 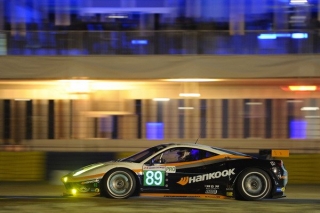 Le Mans, 11 June – The 79th running of the Le Mans 24 Hours got underway at three this afternoon. Guest starter for the famous event was FIA President Jean Todt, who waved the field off the grid.

In the LM GTE-Pro class, as predicted the fight got underway immediately with AF Corse’s Gimmi Bruni in the 458 Italia holding off the Corvette Racing Corvette of Oliver Gavin, who was fighting Augusto Farfus in the BMW Motorsport M3 GT of Augusto Farfus, the latter finally getting past to set off in pursuit of the leading Ferrari. In GTE-AM, a strong showing from the Italian team’s F430 GTC driven by Marco Cioci leading the first of the Porsche Larbre Competition car driven by Jean Belloc and the Aston Martin Vantage of Fabien Giroix (Gulf AMR Middle East.)

The marathon race did not take long to deliver its first spectacular accident when, after just 50 minutes, Allan McNish in Audi Number 3 collided with the Luxury Racing 458 Italia GT2 driven by Anthony Beltoise. Fortunately both drivers were unscathed and the Ferrari was not badly damaged. However, the Safety Car was required for an hour and eleven minutes, thus freezing all the positions.

Ferrari drivers at the parade of stars at Le Mans 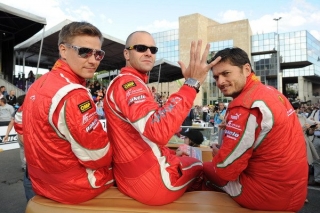 Le Mans, 10 June – Getting near to the drivers in the 24 Hours and even managing to grab an autograph or a photo with one of them is the order of the day during the big parade of the stars which took place today in the Le Mans town centre.

Organised for the first time back in 1995, by the Classic Automotive association, the Big Driver Parade has now become one of the unmissable institutions of the Le Mans 24 Hours. Taking part were all the Ferrari crews who tomorrow will tackle the legendary race, but today, as usual on the Friday, they left the track for a few hours to meet the crowds of fans from all over the world who were there to meet them. Among the drivers were Giancarlo Fisichella, Gianmaria Bruni and Toni Vilander, who paraded through the streets of the town in a car dating from the early 1900s. The formidable AF Corse trio will be looking for the win in the LM GTE PRO category, while for Piergiuseppe Perazzini, Marco Cioci and Sean Paul Breslin in the same team’s F430 GTC, the main item on the agenda is keeping the lead in the LMGTE AM class. 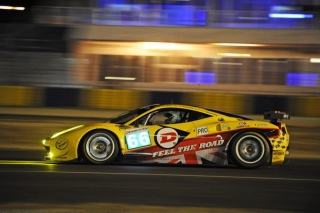 Le Mans, 9 June – In front of grandstands packed since the early hours of this morning with fans keen to watch the 79th running of the Le Mans 24 Hours, qualifying for the famous marathon event ended at midnight, having decided the grid for the 15h00 Saturday start. The Ferrari 458 Italia GT2 No. 51 entered by AF Corse and driven by Giancarlo Fisichella, Gianmaria Bruni and Toni Vilander set the second fastest time of 3.58.040, just 0.448 seconds slower than the quickest BMW Motorsport M3 GT which therefore takes pole for the LM GTE PRO class thanks to the efforts of Augusto Farfus, Jorg Muller and Dirk Werner. After the session, Giancarlo Fisichella was pleased with the car’s excellent performance and great stability. “We are happy with second place, even if we only missed out on pole by a whisker. Our race pace is excellent and during my turn at the wheel I managed to do a great time, even with the car on full tanks. The 458 is really nice to drive and we are all confident for the race, even if we are up against very well prepared rivals like the BMW.”

Among the other Ferraris, the Team Farnbacher car driven by Dominik Farnbacher-Allan Simonsen, Leh Keen, was fifth fastest in 3.59.519, while the Luxury Team 458 Italia GT2 in the hands of Stephane Ortelli-Frederic Makowiecki-Jaime Melo was eighth in 4.12.361. Rob Bell-Tim Sugden-Xavier Maasen (JMW Motorsport) are eleventh in 4.00.890 and thirteenth is the Luxury Racing entry driven by Anthony Beltoise-Philippe Thiriet-Francois Jakuboski in 4.01.176) ahead of the AF Corse car of Robert Kauffman-Michael Waltrip-Rui Aguas, fifteenth in 4.02.216. 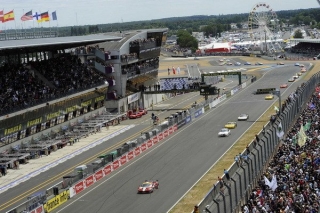 Maranello, 7 June – It’s going to be a busy weekend for the Ferrari Corse Clienti department, working at the Le Mans circuit which hosts the 24 Hour race, the most prestigious endurance event in motor sport, which this year reaches its 79th edition.

The French track will also be hosting the Ferrari Challenge Trofeo Pirelli, as competitors in the Italian and European series tackle a single forty five minute race with separate classifications, as a curtain raiser to the famous race. Action in the one-make series gets underway tomorrow with free practice, followed by qualifying on Thursday 9 June, which will decide the grid for the race that takes place on Saturday at 11.15. Going into the French round, the European Ferrari Challenge Trofeo Pirelli is led by Max Blancardi (Motor/Malucelli,) while in the Coppa Shell, the duo of Jean-Marc Bachelier-Yannick Mallegol (Motor/Piacenza) have a solid lead. This will be the second round of the Italian series which sees Stefano Gai (Rossocorsa) leading the Trofeo Pirelli classification and Mario Molteni (Rossocorsa) ahead in the Coppa Shell.

As for the 24 Hour race itself, which gets underway at 15h00 on Saturday, Ferrari is represented by six 458 Italia GT2 cars. AF Corse currently lead the LM GTE PRO classification in the Intercontinental Le Mans Cup on 27 points and in car number 51, they have Giancarlo Fisichella, Gianmaria Bruni and Toni Vilander at the wheel, while the team’s other 458 Italia GT2 (71) will be crewed by Robert Kauffman, Michael Waltrip and Rui Aguas. Fighting for the victory among the 18 cars in the category will also be the two Luxury Racing cars (58&59,) number 66 entered by JMW Motorsport and Team Farnabacher’s number 89. There are four F430 GTC cars in the LMGTE AM category, entered by Krohn Racing (57,) AF Corse (61,) CRS Racing (62) and JMB Racing (83.)