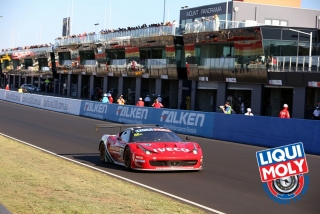 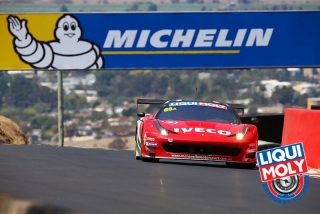 Maranello, 9 February –This season has got off to a good start for the 458 GT. After victory in the GTD class at the Daytona 24 Hours, today it took an overall win in the Bathurst 12 Hours, the most important event on the Australian endurance racing calendar. The victory went to the Maranello Motorsport car crewed by former Scuderia Ferrari driver Mika Salo and the Australians, Craig Lowndes, Peter Edwards and John Bowe.

It was a heart-stopping finale as Lowndes in the Ferrari crossed the line just four tenths ahead of Buhk in the Mercedes. The race had to be neutralised twenty minutes from the end, which wiped out the lead the Australian had built up previously, turning the finish into a two way sprint.

This was Lowndes’ sixth win at Bathurst, to add to the five he’d taken in the 1000 Kilometre race. The team dedicated the victory to Allan Simonsen, who had flown the flag for the Melbourne team so often, including at Bathurst, who tragically died at last year’s Le Mans 24 Hours.

The other two Ferraris entered fared less well. The Clearwater Racing car (Mok-Baird-Griffin-Hamaguchi) had to retire after 57 laps, having collided with a backmarker. Things were even worse for the AF Corse 458 GT (Wyatt-Rugolo-Cioci,) as it was unable to start, the chassis having been irreparably damaged after going off track in qualifying. As for the Australian Vicious Rumor Racing team, their adventure ended in free practice: its 458 GT3 had a serious accident in the Friday session, which also involved an Audi and the AF Corse 458. The damage sustained could not be repaired so it took no further part in proceedings.