Massa at Maranello: a day with his second family 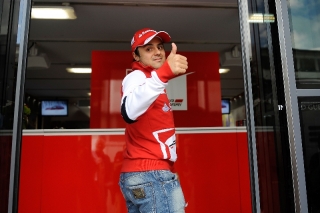 Maranello, 10 July – Family is important, the real one and the one at work. It’s something Felipe Massa is well aware of, knowing he can count on both. There’s the one he has created with his wife Raffaela and little Felipinho, the one that brought him into the world and followed him every step of the way in his life and his racing, namely his father Luiz Antonio and mother Ana Elena, along with his brother Dudù and sister Fernanda. Then there’s the one for whom he flies the flag at race tracks all around the world, Ferrari and its President Luca di Montezemolo, Stefano Domenicali and all the men and women in red. It’s when times are tough that you find the support and energy you need to react from your family.

Today, Felipe is in Maranello. There’s nothing new or unexpected in that, as it’s part of his simulator programme. Neither is it a novelty for him to meet President Montezemolo, who always follows the Scuderia on a quotidian basis, even for a long and in depth meeting to look at the short term development programme. “Felipe is fully aware he can count on our total confidence in him,” said the President to www.ferrari.com. “I hope he will soon secure the results that will show his talent to the full, such as the great starts he pulled off at the last two Grands Prix. The future? We will talk about that further down the line as there’s no hurry.”

“I was here in Maranello for a day at the simulator, as is the norm during the season,” said Felipe. “I was very pleased to meet the President: his passion and his will to win are always contagious and stimulating!”