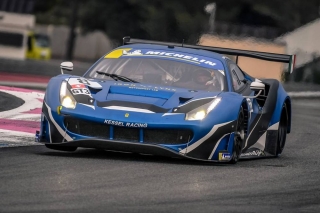 Maranello, 12 June 2019 – The first free practice sessions of the Road to Le Mans 2019, the most eagerly awaited event of the Le Mans Cup, are now just a few hours away. Eight Ferraris will line up for the third round of the series out of a total of 49 cars, 17 of which will be competing in the GT3 class representing six different manufacturers.

The situation. The championship thus far has been a duel between the two Ferraris of Kessel Racing and Luzich Racing, respectively crewed by the reigning champions Sergio Pianezzola and Giacomo Piccini, and Mikkel Mac and Fabien Lavergne. The Italian pair tops the standings on 44 points after victory at Le Castellet and second place at Monza. Luzich Racing, on its debut in the series, is in second with 41 points, courtesy of third place in the debut race and a win in Lombardy. Then further back in third, the crew of Beechdean AMR is on 22 points.

Kessel 4. Along with the 488 GT3 of Pianezzola and Mac, the Swiss team is fielding three other Ferraris. The first is driven by the British pair John Hartshorne and Oliver Hancock, regular competitors in the series, who are joined by the Americans Philippe Mulacek and Anthony Lazzaro and, in the fourth car, the US driver Pierre Mulacek and the German Pierre Kaffer.

Spirit of Race trio. Three cars will carry the colours of the Swiss team. The first is no. 51, with Maurizio Mediani and Christoph Ulrich again at the wheel, after a podium finish at Monza. Francesco Piovanetti and Oswaldo Negri Jr (no. 52) and Kriton Lentoudis and the experienced Rui Aguas will drive the other two cars along the 13-kilometre La Sarthe circuit.

Programme. The first free practice session takes place today, with the second on Thursday, followed by two qualifying sessions and the first of the two 55-minute races, which is due to start at 5:30 pm. On Saturday, Race-2 sets off at 11:30 am.