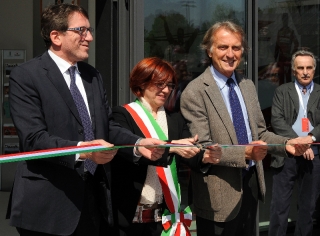 Maranello, 11 April 2014 – This morning, Ferrari president Luca di Montezemolo and the mayor of Maranello, Lucia Bursi, officially opened the new main building of the Museo Ferrari that features the information office and a welcome centre for tourists. It was built in conjunction with the local council and also features a new play area with simulators for children and a wheel changing attraction that is also open to adults. The new wing thus completes the imposing building, which in the space of just a few years had doubled its visitor ticket sales to 320,000 and has become one of the most admired museums in Italy.

Speaking at the opening ceremony, Mayor Bursi said the construction was “an example of the fruitful collaboration between the public and private sectors, as this project was financed by the European Community and carried out fully within budget.” She went on to underline the sustainability of the project. “The new area is equipped with charging points for electric cars and was produced using a ceramic material that reduces pollution. It’s a great calling card to welcome tourists.” Montezemolo then had this to say: “With this project, we can regard Maranello’s Museo Ferrari as complete. We have built this area to give even more space to visitors and the work has been done in such a way as to make this place a benchmark, not just for fans but for families too.”

The president then took those attending the ceremony inside the Museum to show them the “California dreaming” exhibition. “This exhibition celebrates 60 years of Ferrari in the United States and the launch of the new California T, a model that reprises the historic car born in the Fifties which, in percentage terms, is still our best selling car”. The exhibition is organized in four different areas dedicated to racing, Hollywood, elegance and innovation and shows unique masterpieces like the car driven by Alberto Ascari at the 1952 Indianapolis 500 an the cars used in many movies that has won a large number of awards.