A record gathering in New Zealand 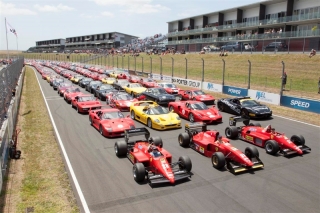 It’s not every day you see 140 Ferraris of every type and from every era brought together on the grid of a race track and it’s even more sensational if the unusual gathering takes place almost a pole apart from the country where the cars were built, in other words in New Zealand.

The gathering took place last weekend as part of the New Zealand Festival of Motor Racing, at the Hampton’s Down circuit. The Ferraris set a record for the largest gathering in the land of the long white cloud: from the Enzo to the F40, three Formula 1 cars, an F50, as well as cars from the current range, it all made for a great show on the main straight of the track, which is around 60 kilometres to the south of Auckland.

The event confirms the great popularity of the Prancing Horse in New Zealand and was organised in collaboration with the local Ferrari Owners Club. Thousands of spectators were thrilled by the spectacle, which is to be repeated next weekend.