Can I test CarPlay? 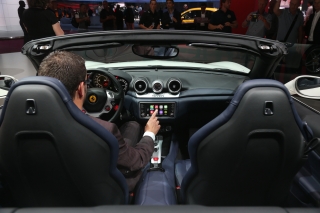 The Apple device in Paris on California T

Paris, 4th October – Along with the brand-new Ferrari – 458 Speciale A – the visitors attending Paris Motor Show were fascinated by Apple CarPlay: after being fitted on FF, in this special occasion it was available on Ferrari California T as well. At Ferrari stand, many fans wanted to test personally the device that’s integrated in the car and makes all functions immediately and easily available, both through voice controls and touch buttons – from radio to text messages and maps.

All flashes are for the Queen 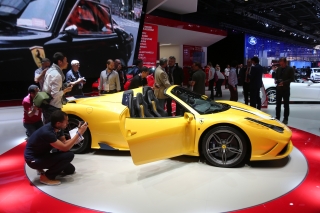 The day after the Ferrari 458 Speciale A unveiling

Paris, 3th October – 24 hours after the unveiling of the brand-new Ferrari 458 Speciale A at the Mondial de l’Automobile in Paris, fans and visitors are still rushing to film and take photos of the car and its details. The most powerful Ferrari Spider ever built (458 Speciale A) was unveiled yesterday by Chairman Luca di Montezemolo in presence of FCA Chairman John Elkann and FCA CEO Sergio Marchionne.

Many visitors also at the Tailor Made atelier, the exclusive personalization programme that allows owners to create their own bespoke car.

Ferrari steals the show at Paris 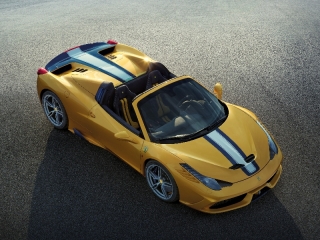 Paris, October 2nd 2014 – The new 458 Speciale A, just unveiled by Chairman Luca di Montezemolo at the Mondial de l’Automobile 2014 in Paris, instantly became the star of the show. A limited edition special series of just 499, it is the most powerful Ferrari spider ever built, thanks to an unprecedented V8 engine and active aerodynamics. It sprints from 0-100 km/h in just 3 seconds and its retractable hard top deploys and retracts in a mere 14 seconds. The 458 Speciale A makes its debut in a triple-layer Modena yellow livery with central Blu NART and Bianco Avus stripe.

However, it is far from the only motoring gem that Maranello has brought along to the Paris Show.

On the technology front, the Ferrari California T on the stand is equipped with CarPlay, the innovative Apple system that integrates with the car’s own infotainment set-up to provide instant and intuitive voice and touch functionalities: everything from phone calls to map use, messaging to playing music. This extends the Apple system’s incorporation into the Ferrari range which began with the FF, the first car in the world to offer CarPlay.

Also on the Paris stand is an upgraded Tailor Made atelier which makes available the exclusive personalisation programme that allows owners to create their own bespoke car. It plays host to an FF in Grigio Abu Dhabi with details in the historic Grigio Ferro Met. The car’s cabin also features luxury materials, such as buttery-soft Frau “Soul Aretha” leather and elegant “Solaro”, a slightly iridescent tailoring fabric. Meticulous care has been lavished on the choice and execution of every one of the many original details aboard, from teak and ash trim accents in the cabin to the lining of the boot in woven leather and textile.

The new 458 Speciale A will be flanked on the stand by the rest of the current range with liveries, colours and details selected to represent the very best of Ferrari tradition and exclusivity Ferrari.

Paris world premiere for the 458 Speciale A, the most powerful spider ever 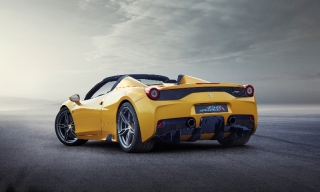 After the FF, the Apple CarPlay system is extended to California T

Paris, October 2nd 2014 – The 458 Speciale A makes its world debut at the 2014 Mondial de l’Automobile in Paris. A limited edition special series of just 499 cars, the new model enhances the sublime pleasure of Ferrari drop-top driving with the blistering performance of the company’s most powerful naturally-aspirated V8 engine ever.

This latest spider is a celebration of the 458, a model which, in its various incarnations, has won a plethora of international motoring plaudits, not least three Best Performance Engine awards, as well as delivering many track victories, including a WEC title and wins in the legendary 24 Hours of Le Mans and Daytona.

Engine aside, another pivotal factor in the benchmark performance delivered by the 458 Speciale A is its active aerodynamics. Thanks to a Ferrari-patented mechanism, two vertical flaps at the front of the car and one on the underbody open at high speeds to lower drag. At the rear, an original set-up centring around a mobile diffuser augments downforce as required too. The result is that the 458 Spider A is the most efficient Ferrari spider ever built.

Also fundamental are the aerospace-derived materials and technologies adopted in the chassis which is made from 10 aluminium alloys to combine lightness and rigidity, and the retractable hard top (RHT) which deploys  or retracts in just 14 seconds. The Speciale A employs latest-generation electronics, specifically Side Slip Angle Control system (SSC) which allows even less expert drivers to exit corners on the limit, delivering a uniquely exhilarating driving experience underscored by the signature uncompromising and seductive Ferrari soundtrack.

For its world premiere, the 458 Speciale A has been given an unusual triple-layer Modena yellow livery in honour of the colour of the eponymous city, as well as a central stripe in Blu NART and Bianco Avus, an homage to Luigi Chinetti’s American racing team which won many endurance classics in Ferraris in the 1960s.

The 458 Speciale A’s Grigio Corsa five-spoke wheels are forged for maximum lightness. The cabin interior has been kept absolutely minimal with extensive use of carbon-fibre for the dash, door panels and central tunnel which, like the treadplates, are in an exclusive blue for the Paris premiere.  The 458 Speciale A’s seats are newly designed and feature Alcantara© upholstery, contrasting stitching and 3D technical fabric.

CALIFORNIA T WITH APPLE CARPLAY
The real star on the Grand Tourer front at the Paris Show is the Ferrari California T with CarPlay, the innovative integrated Apple system which provides instant and intuitive voice and touch control: everything from phone calls to map use, messaging to playing music.  This extends the Apple system’s integration into the Ferrari range which began with the FF, the first car in the world to offer CarPlay.

TAILOR MADE FF
The upgraded Tailor Made bespoke personalisation area on the stand plays host to an FF in Grigio Abu Dhabi with details in the historic Grigio Ferro Met. The car’s cabin also features luxury materials, such as buttery-soft Frau “Soul Aretha” leather and elegant “Solaro”, a slightly iridescent tailoring fabric. Meticulous care has been lavished on the choice and execution of every one of the many original details aboard, from teak and ash trim accents in the cabin to the lining of the boot in woven leather and textile.

THE RANGE
The new 458 Speciale A will be flanked on the stand by the rest of the current range with liveries, colours and details selected to represent the very best of Ferrari tradition and exclusivity. Not least of these are the new arrival’s two sister models: the 458 Speciale in Rosso with a blue and white racing livery and red 3D material cabin trim, and the 458 Spider in classic Rosso Corsa with leather trim. Sticking to the sports car theme, but this time powered by the mid-front V12 engine, the F12berlinetta on the stand is in a Grigio Titanio livery with black cabin trim and carbon-fibre details. On the GT side, the FF is a sleek Nero Stellato with Sabbia interior plus an exclusive panoramic roof. Last but very far from least, the California T is in an elegant Bianco Italia paintwork with Nero Stellato roof and Blu cabin trim. 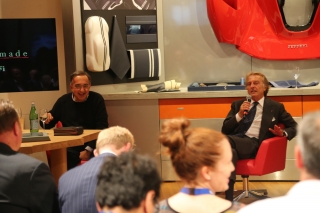 From the 458 Speciale A to Alonso: Montezemolo speaks at Paris

Paris, 2nd October – “Life is always full of lots of surprises but the important thing is to keep learning.”
These were the words with which Ferrari Chairman Luca di Montezemolo opened his traditional Paris Motor Show meeting with journalists which was also attended by Prancing Horse CEO Amedeo Felisa and FCA CEO Sergio Marchionne.
Montezemolo then turned to the brand-new 458 Speciale A, emphasising that it is the most high-performance spider in Ferrari history, combines leading-edge technology with meticulous artisanal attention to detail and is a limited edition special series of just 499. He also spoke about a year that will prove “unprecedented” in terms of financial performance, thanks to a trading profit of 400 million euro and a net financial position of 1.5 billion.
There were, of course, questions on the Formula 1 front, most specifically on relations with Alonso, to which Mr Montezemolo responded: “Fernando is an incredibly strong driver who has given a huge amount to Ferrari in recent years. I have spoken with the Team Principal Marco Mattiacci and told him to discuss things with him. I feel it is important that Ferrari and Alonso talk to confirm their mutual respect and friendship.”
Sticking with the subject of Formula 1, Montezemolo continued: “I have heard talk of a third car being introduced because two or three teams might be forced to quit. I’ve been pushing the whole third car idea for years now. Even if the sport opts for this solution out of a sense of urgency rather than because it was actually planned, I would still find it a positive development.”
When asked how he imagines Ferrari in five years’ time, Montezemolo answered: “I imagine Ferrari will be different, just as the Ferrari of today is different from the Ferrari of five or 10 years ago. But I am sure that it will still have the characteristics that make it unique in its DNA.”
At the end of the meeting, Montezemolo said a personal goodbye to each of the journalists individually, and posed for photographs with many of them also. 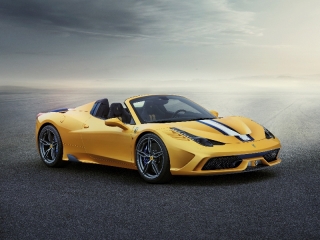 499 cars to celebrate our most successful, award-winning 8-cylinder model

Maranello, 25th September 2014 – Ferrari is pleased to announce the Paris Motor Show world debut of the 458 Speciale A (A as in Aperta). The new limited edition special series is a celebration of the dazzling success of the various versions of the 458, a model that has collected an array of international motoring media awards and track victories, not least a double WEC title and category wins in classic endurance races, such as the 24 Hours of Le Mans, the 24 Hours of Daytona and the 12 Hours of Sebring.

Dedicated to just 499 Ferrari collectors, the 458 Speciale A is the most powerful spider in Prancing Horse history, effortlessly marrying extreme performance with the sublime pleasure of drop-top driving. Its aluminium retractable hard top, which takes a mere 14 seconds to deploy or retract, helps reduce the weight difference with the Speciale coupé to just 50 kg.

The 458 Speciale A sports the most powerful naturally-aspirated road-going V8 engine ever built by Ferrari. It punches out a massive 605 cv (135 cv/l specific power output) and 540 Nm of torque at 6000 rpm yet only generates 275 g/km of CO2 emissions. The three international Best Performance Engine awards the V8 has won are acknowledged on a special plaque in the cockpit.

The new car sprints from 0-100 km/h in just 3.0 seconds and has a Fiorano lap time of 1’23”5. These superb results are thanks in great part to its front and rear active aerodynamics, the rigidity of a chassis that incorporates 10 aluminium alloys, and Side Slip Angle Control (SSC) which guarantees unparalleled sporty driving in all conditions, underscored by the seductively exhilarating signature Ferrari soundtrack.

As is the case with all Prancing Horse cars, the 458 Speciale A’s sculpted forms are absolutely performance-oriented. In fact, a series of innovative and original bodywork solutions has made the 458 Speciale A the most aerodynamically efficient Ferrari spider ever.

The 458 Speciale A is being premiered in a unique triple-layer yellow livery with a Blu Nart and Bianco Avus central stripe as well as five-spoke forged wheels in Grigio Corsa. The cockpit has a distinctive racing-inspired look: lightweight yet exclusive materials have been adopted throughout and, of course, crafted with Ferrari’s signature artisanal sophistication. This is particularly true of the finish of the dash, the moulded door panels and central tunnel in an exclusive blue carbon-fibre (also used for the treadplates) as well as the newly-designed seats in Alcantara© with contrasting stitching and 3D technical fabric.