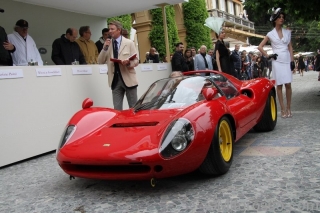 Carmel-by-the-Sea, Calif., July 27, 2016 – In its milestone move to reinvigorate the tradition of celebrating the international motoring world’s top accolade for most exceptional classic car, The Peninsula Hotels today announced the six extraordinary vehicles that will be eligible to receive the inaugural The Peninsula Classics Best of the Best Award.

The award will bring together the 2015 best of show winners, ranging from early production to mid-1960s Italian race cars, from six of the top concours events around the globe to compete for the title of the most exceptional car in the world.

The ultimate winner of The Peninsula Classics Best of the Best Award will be announced at a private dinner during the prestigious historic Monterey Car Week on Tuesday, August 16, 2016.

The Hon. Sir Michael Kadoorie, Chairman of The Hongkong and Shanghai Hotels, Limited, and parent company of The Peninsula Hotels, together with award co-founders Christian Philippsen, William E. “Chip” Connor and Bruce Meyer, created this award in the spirit of celebrating the best of what defines the automotive world for the year. Philippsen is known as the world’s most prominent classic automobile authorities, Connor leads the world of international vintage car collecting, while also being a passionate amateur race car driver and Meyer is praised for having curated one of the premier vintage car collections in the United States at the Petersen Automotive Museum. Each of the founders are widely heralded as some the world’s foremost international motoring experts, brought together by their appreciation of fine motor vehicles, immaculate restoration and the preservation of their heritage.

“We are thrilled to pay homage to the finest attributes of the motor vehicles we celebrate at this year’s The Quail, A Motorsports Gathering,” said Kadoorie. “The Peninsula Classics Best of the Best Award marks a new milestone as the first of many extraordinary presentations of the most elite cars on the concours circuit and we couldn’t be more thrilled to be a part of elevating the legacy our event has come to manifest.”

The finalists chosen to be showcased at the event as the most elite driving machines are as follows:

1937 Talbot-Lago T150C SS ‘Goutte d’Eau’: Goodwood Cartier Style et Luxe
This masterful coachwork by Figoni et Falaschi has won prizes at every major concours in pre-war Europe and is famed for having both redefined automotive style and having won top-level races. The ‘Teardrop’ became trend setting and motivated many other French manufacturers to consider a similar streamlined design.

1968 Alfa Romeo Tipo 33 Stradale: The Quail, A Motorsports Gathering
This model was derived from the Alfa Romeo 33/2 racing cars with the goal of creating a sports car staying as true to its racing heritage as possible. The Stradale is fitted with a 2 liter DOHC V8 producing 230 BHP, while the chassis was extended 10 centimeters for additional driver comfort from the 33/2. Since its restoration in 2004, this Tipo 33 Stradale has won four top honors, including Best in Show at the 2015 The Quail, A Motorsports Gathering.

The Best of Show winners from the six most prestigious international car shows from this year will be reviewed by 23 preeminent motorcar experts, designers and notable celebrities in the motoring world, including:

The award will act as the pinnacle moment of Monterey Car Week design displays. Following Tuesday’s announcement, the winning vehicle will be recognized on stage at the 14th annual The Quail, A Motorsports Gathering on August 19, 2016.