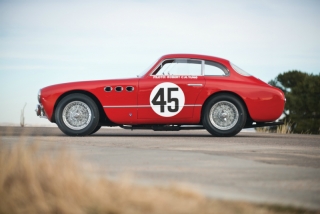 BLENHEIM, Ontario (February 14, 2013) – As anticipation builds for RM’s annual Amelia Island sale, the official auction house of the Amelia Island Concours d’Elegance is delighted to announce the consignment of a legendary 1948 Tucker  to its March 9 event. Widely regarded as one of the most advanced, early, post-war automobiles ever built, the rare and highly sought-after Tucker joins a magnificent roster of more than 80 blue-chip automobiles hand-selected for the RM sale, including no less than eight examples with pre-sale estimates exceeding $1,000,000.

Delivered new on August 11, 1948, the Tucker 48 on offer,serial number 1003, was the third of just 51 examples built and the first to feature the valance panel between the body and front bumper. Its rarity is further elevated by its desirable color; of the six factory colors available, 1003 is one of only 12 originally painted Maroon. Well-documented from new, it boasts a superb provenance and ownership history, having passed through the hands of numerous respected collectors, including the late Bill Pettit. In the late-1980s, it was purchased by none other than prominent filmmaker George Lucas, the visionary imagination behind Star Wars and other box office hits. Lucas took a special interest in Tuckers and was executive producer of Francis Ford Coppola’s 1988 film Tucker: The Man and His Dream. The film revived modern interest in the Tucker and has become something of a cult classic among automobile enthusiasts. Since coming into the care of its current owners, 1003 has been extensively and authentically restored by marque experts, with special attention paid to its drivability and reliability. It is estimated to fetch between $1,500,000 and $1,900,000 when it crosses RM’s Amelia Island auction podium next month.

“The Tucker Torpedo, as it was often called, was a paragon of advanced engineering and safety features with radical, futuristic styling. Arguably, the most important post-war American collectible automobile, Tuckers consistently attract strong interest whenever they come to market,” says Don Rose, Car Specialist, RM Auctions. “The example on offer at our Amelia Island sale, 1003, is truly among the best of the best—not only is it a beautiful automobile in terms of its presentation, but it is fully and robustly functional, ready to take to the road. It’s a perfect fit for our Amelia Island auction, which, along with the Amelia Island Concours d’Elegance, is dedicated to celebrating great and iconic automotive styling.”

The Tucker will be joined center stage at RM’s Amelia Island sale by an exceptional roster of other important and historic automobiles, including:

Location: The Ritz-Carlton, 4750 Amelia Island Parkway, Amelia Island, Florida, 32034
Admission: Admission to the auction is limited to registered bidders. Bidder registration is $200 US and includes an official catalogue and admission for two to the preview and auction.

For those unable to attend the event in person, Internet, absentee, and telephone bidding options are available, and the auction will stream live at rmauctions.com to provide real-time coverage of the event.

RM Auctions is the world’s largest auction house for antique automobiles. With over three decades of experience in the collector car industry, RM’s vertically integrated range of services, from restoration to private treaty sales, auctions, estate planning, and financial services, coupled with an expert team of car specialists and an international footprint, provide an unsurpassed level of service to the global collector car market. RM proudly holds five of the top ten all-time records for the most expensive motor cars sold at auction. RM’s restoration division has achieved unprecedented accolades, earning Best of Show honors at the world’s top concours events, including the Amelia Island Concours d’Elegance. For further information, visit rmauctions.com, find us on Facebook, or follow us on Twitter @rmauctions.

About The Amelia Island Concours d’Elegance

Now in its second decade, the Amelia Island Concours d’Elegance is among the top automotive events in the world. Always held the second full weekend in March, “The Amelia” draws over 300 rare vehicles from collections around the world to The Golf Club of Amelia Island and The Ritz-Carlton, Amelia Island, for a celebration of the automobile like no other. Since 1996, the show’s foundation has donated over $2 million to Community Hospice of Northeast Florida, Inc. and other charities on Florida’s First Coast. The 18th annual Amelia Island Concours d’Elegance is scheduled for March 8–10, 2013. For more information, visit www.ameliaconcours.org or call 904-636-0027.