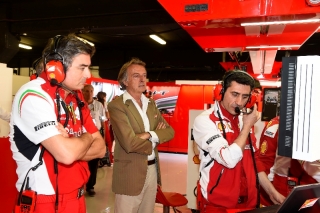 Maranello, 16 June – Two months on from his appointment as Scuderia Ferrari Team Principal, this morning Marco Mattiacci brought together all the staff and associates in the Nuova Logistica building to explain the key points of the plan to revamp the team.

Ferrari President Luca di Montezemolo was on hand to give his support to this ambitious plan, as Mattiacci spoke of the changes needed to make the team operate more efficiently and quickly, while also becoming even more united, stressing that Ferrari’s one goal was to get back on top.
The Team Principal pulled no punches in order to instill motivation in the team, which currently needs to tackle the difficult task of making up ground on its rivals.

Mattiacci also spoke of his medium and long term plans, laying out the details of a programme that is not just restricted to next season, but more than that, is also aimed at creating a group of people who can put the team back on a winning cycle, making a complete break with the past, innovating courageously and emphasizing the worth of the mechanics, engineers and engine specialists.