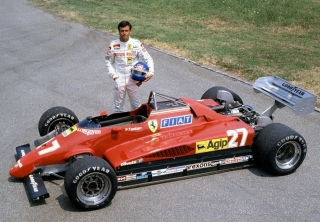 Patrick Tambay makes a welcome return to Maranello after 30 years 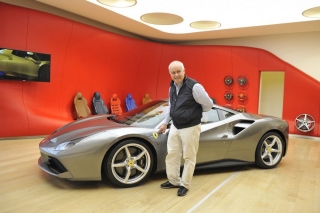 “The Ferrari 488 GTB’s lines are instantly seductive” Maranello, 10 March – He hadn’t been back to Maranello in almost 30 years, but Patrick Tambay has now finally made a welcome return to Ferrari where he met with Deputy Chairman Piero Ferrari before visiting several of the company’s departments, including the new GES Racing facility and the eight-cylinder production lines. The visit. In the GES facility, the French driver, whose career spanned 114 Formula 1 grands prix and two wins, both for Ferrari in 1982 and 1983, got the opportunity to admire the Scuderia Ferrari’s new headquarters, including the simulator and the new engine assembly department. Mr Tambay then continued his tour of the company, stopping off at the eight-cylinder production lines before going to the Ferrari Atelier where he first examined LaFerrari and then the brand-new V8 488 GTB, unveiled just last week at Geneva. Admiration. Mr Tambay declared that he was greatly impressed by both cars: “LaFerrari looks like it was born purely for the track: it’s incredible and its performance levels are easily on a par with its beauty. The 488 GTB’s lines are instantly seductive. When you look at it, particularly in profile, you really feel the design takes into account that it will have to do battle with other constructors’ cars on the world’s circuits.” The French driver also pointed out that the 488 GTB very clearly exploits the knowledge gleaned by Ferrari on the Formula 1 tracks and in GT racing. The Scuderia. The Parisian driver, who has been a Formula 1 commentator on French radio for many years, also spoke about the World Championship which gets underway this week in Australia: “I believe Ferrari has embarked on an important new course, changing a great many things and focusing on Sebastian Vettel, a driver who is a real team player but also very fast. The target the team has set itself is to win at least one race and I’m convinced Seb will manage to do that.”