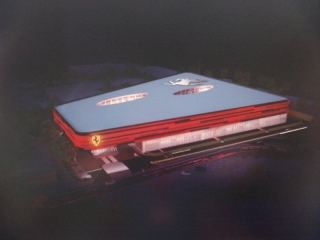 Maranello, 10 February –Just over a year ago, excavation work began between the Cavallino restaurant and the area which currently houses the Formula 1 team. 13 months on from Stefano Domenicali marking the start of the earth moving operation, Scuderia Ferrari’s new home is already in an advanced stage of construction, as can be seen in the photo gallery. Once excavation was completed, work progressed at a great rate. In July the digging stopped and the work of preparing the ground and laying the foundations began. Work went on all the time, even during the August break when all the debris was removed. September saw the first level of cement go down and the scaffolding go up so that the external walls could be built. A month of hard work meant that by the end of October a first perimeter of the building could be seen, while the load bearing pillars of the structure were also in place.

In November, the first parts of the framework were covered in cement to form the first rough walls of the new building and at the end of the month, the floor of the basement was completed. On 13th December, with work continuing under floodlights, the perimeter walls of the structure were all erected. The penultimate day of 2013 saw the steel pillars of the upper floors going up and by the end of January many more pillars were in place and one could being to get an idea of the framework of the whole structure. Work will end in the summer and that will mean the completion of one of the most interesting architectural projects of recent years, built on the criteria of functionality, efficiency and style that characterize the Formula Uomo programme, aimed at creating a working environment that best suits the needs of those who work there.