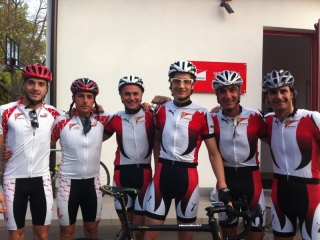 Maranello, 9 July – There’s a famous Italian song by Francesco De Gregori, which roughly translated means you can’t know everything about someone, by picking on one small detail. However, some details do indeed reflect the bigger picture, like getting up at six in the morning to go on a bicycle training run before tackling a day in the cockpit of a Formula 1 car. It certainly paints a picture of the Scuderia Ferrari personnel’s determination to react immediately off the back of two race weekends that did not live up to expectations.

Pedro de la Rosa is currently in Maranello for two days on the simulator, to prepare for the upcoming days on track, first next week at the Silverstone test and then the week after for the Hungarian Grand Prix. To keep himself in shape, he decided to put in a session on the bike this morning, climbing the hills that surround Ferrari’s home town. Two other drivers from the Prancing Horse clan, Andrea Bertolini and Jules Bianchi, as well as Sporting Director Massimo Rivola also went along.

Cycling is one of the most popular sports among the Ferrari drivers and engineers, which helps keep them in the best possible shape, something which has now become well known through Twitter, where Fernando Alonso posts his training regime. It seems his fellow countryman, De la Rosa, also takes things very seriously when it comes to how many kilometres he knocks out on two wheels!