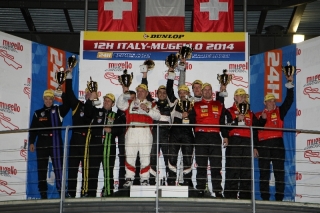 The first edition of the 12H Italia-Mugello has ended with a spectacular victory for the Ferrari 458 of the AF Corse team. The race, which was organised with great precision by Creventic events, was divided between Friday (3 hours) and today (9 hours). After 349 laps and a total of 1830.5km over the combined total of 12 hours, the AF Corse car driven by Alexander Talkanitsa father and son, Felipe Barreiros and Ilia Melnikov, came home just five seconds ahead of its opponents from the Stadler Motorsport team (Marcel Matter, Adrian Amstuzt, Mark Ineichen). The race was characterised by a great comeback by the Ferrari of the world endurance champions, who were able to keep up consistent and impressive pace that, hour after hour, thanks in part to problems faced by their opponents, took the 458 number 7 to the front in the final hour of the race. At that point the duel between the AF Corse and the Stadler Motorsport teams began in earnest, with a deserved victory going to the team that best handled the pressure of having their opponents always in their mirrors. Fourth place went to the other Ferrari in the race, also a 458, which had the satisfaction of setting the fastest lap of the race.

Excitement in the first section of the Italia-Mugello 12h 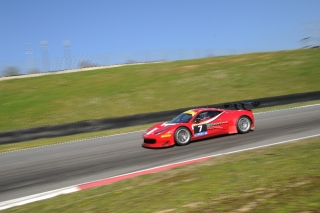 Mugello, 14 March – There was a spectacular start to two days of motor racing at Mugello as it hosted the first section of the 12H, an endurance race of international standing that marks the start of the 2014 season at the circuit in Tuscany. The race, over a combined period of 12 Hours, saw 36 teams at the start and it was immediately characterised by the impressive performance of the cars in the race, which have been divided into six classes. The Hofor Racing team car (driven by Michael Kroll, Roland Eggimann, Christian Frankenhout and Kenneth Heyer) was particularly consistent in its performance and this allowed it to build up, lap after lap, a significant advantage. By the end of the first portion of the 12-Hour race this had taken them a lap clear of its closest challenger, the Stadler Motorsport car in the hands of Marcel Matter, Adrian Amstuzt and Mark Ineichen who drove the first part of the race. They in turn must fend off the Fach Auto tech car of Marcel Wagner, Heinz Bruder and Marco Zolin, which is just 20 seconds behind. Now the cars are being held in parc fermé conditions before the race begins again tomorrow at 9.30 before running until 18.30, immediately after which there will be a prize-giving ceremony. Information about the event: tickets 10 Euros. For residents of Florence and the surrounding area entry is free. You can find information at mugellocircuit.it.

Mugello 14 March – Qualifying was incredibly close for the first ever Italia-Mugello 12 Hour race, taking place at the Tuscan circuit. Starting from pole will be the Stadler Motorsport team, winners of this year’s Dubai 24 Hours. The fastest time set by the crew of Marcel Matter, Adrian Amstutz and Mark Ineichen was a 1.50.407, at an average speed of 172.021 km/h.

Just under 3 tenths down was the first Ferrari 458 Italia GT3, the no.7 entered by the World Endurance Champions, AF Corse and driven by the Belarus father and son pairing Alexander Talkanitsa Snr. and Jnr, the Portuguese Felipe Barreiros and the Russian Ilia Melnikov. Then came the Scuderia Praha 458, crewed by three Czechs, Jiri Pisarik, Jaromir Jirik e Dennis Waszek in third in a time of 1.50.856. The unusual format features a three hour race today, with the remaining nine hours taking place tomorrow. The start is at 14h00 at which points the runners will complete two laps before the red lights go out and the 12 hour race will be underway. 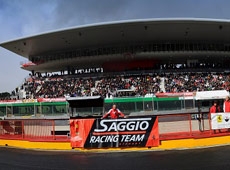 Mugello, 11 March – The 2014 season at Mugello is to begin with an endurance motor race of international standing. This year, in fact, the 24H Series will make its first appearance in Italy with a round at Mugello’s Autodromo Internazionale. The race will feature more than 40 teams from all over the world. There will also be two Ferrari 458 Italia GT3s on track. One will be run by the world endurance champion team AF Corse and will have at the wheel the Belorussian father and son pair, both named Alexander Talkanitsa, freshly returned from success in the second race of the Paul Ricard Winter Series, along with Portugal’s Felipe Barreiros and Russia’s Ilia Melnikov. The other will run in the colours of Scuderia Praha and will be driven by three Czechs: Jiri Pisarik, Jaromir Jirik and Dennis Waszek.
Among the teams in action will also be the Germans of Stadler Motorsport, the winners of the 2014 Dubai 24 Hours, and Hofor Racing, who prevailed in the Barcelona 24 Hours. Also taking part are many different touring cars, which are always capable of putting on a show.
It all gets under way on Friday with free practice from 9.30 until 10.45, then qualifying from 11.00 until 12.30. The first part of the race will also take place on Friday, from 1400 to 1700. At that point the cars will be held in Parc Fermé until the race starts again on Saturday at 9.30, running until 18.30 and immediately followed by the prize ceremony.