Day of Celebration for Bruni and the 458 with Hublot 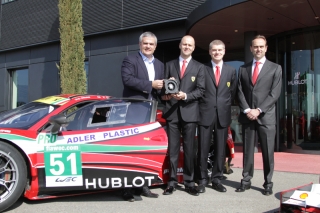 Maranello, 11 March – A day of celebration has taken place at Nyon to mark three world titles. This was the ‘Ferrari Day’ organised on March 10 at the Hublot headquarters to honour Gianmaria Bruni and the Ferrari 458 GT2 of the AF Corse team, who won the drivers, constructors and team titles in the 2013 World Endurance Championship. Along with the Roman driver, Ferrari was represented by the head of the Sporting Activity Department Antonello Coletta, while parked in the courtyard of the Nyon base were Bruni’s 458, the F138 Formula 1 car and the Ferrari Safety Car.

To mark the occasion the managing director of Hublot, Ricardo Guadalupe, unveiled a specially created celebratory watch. It’s called Big Bang Ferrari GT Championship 2013 and it will be a limited edition.

After the Swiss event Gianmaria Bruni, who will defend his World Endurance Championship this year, headed to the United States where he will take part in the Sebring 12 Hours with the 458 of the Risi Competizione team. The race is scheduled for this weekend and counts towards the USSC championship.