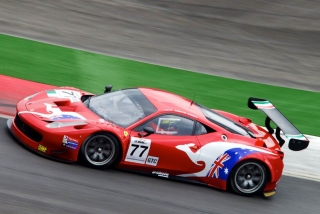 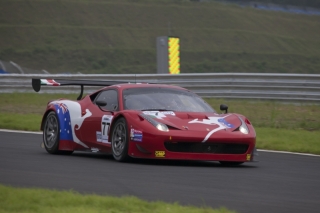 AF Corse’s #77 car triumphed in the first Asian Le Mans Series race held at the Inje Speedway in Korea winning the GTC and finishing second overall.
After a torrential downpour at the start of the three hour race, the cars were forced to spend the first eight laps of the race behind the safety car. However as the track dried quickly the Ferrari showed its pace and the trio of Steve Wyatt, Andrea Bertolini and Michele Rugolo triumphed in the first race of the season.
Ferrari also topped the podium in the GTE class with the Taisan Ken Endless’ car driven by Japanese duo Kamui Kobayashi and Naoki Yokomizo.
The second round of this four race series takes place at the Fuji circuit in Japan on the 22nd September. 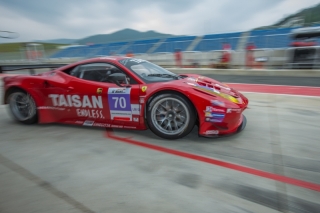 The inaugural race in the Asian Le Mans Series will take place this Sunday at the Inje Speedium in South Korea, as endurance racing makes a move into Asia. The grid, although small, will have a contingent of Asian drivers, as the rules of the new championship state that cars should have at least one Asian driver. Supporting the event will also be two races for the Asia Pacific Ferrari Challenge.

After its outstanding success in the GT-AM category at Le Mans AF Corse enter a Ferrari 458 GT3 for Andrea Bertolini, Steve Wyatt and Michele Rugolo at the race in South Korea. Also joining the Ferrari stable will be a Ferrari 458 GTE entered by Japan’s Taisan Ken Endless Racing and driven by Japan’s Kamui Kobayashi and Naoki Yokomizo.

With the series winner and runner up in the GTC class awarded entry into the 2014 Le Mans 24 Hour race the competition is sure to be fierce in this the first of a series of four, three-hour races for the championship.

Asian Le Mans Series Managing Director Mark Thomas: “We are very pleased with what we have achieved so far in getting the Asian Le Mans Series off the ground. Starting a new series, in a region where there is not yet a great widespread motorsports culture, was always going to be a challenge as these things take time. However we have managed to secure a solid number of great teams and partners for this season. We are looking forward to a very exciting and successful first season, and building a strong foundation, upon which we will grow and develop in the years to come.”