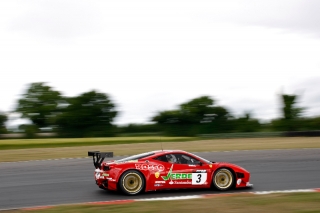 Maranello 9 August – It is another busy weekend of racing for the extremely successful Ferrari 458 GT car. Cars are in action at Brands Hatch in the UK for the British GT Championship and over in America at Road America for the Grand Am and American Le Mans Series championships.

At Brands Hatch it’s the fifth round of the seven part British GT Series, as the ranks continue to grow for this popular British Championship the grid now features five Ferrari. Joining the ranks in the FF Corse entered car driven by South African Gentleman driver Jacques Duyver and young British driver Charlie Hollings. The pair will race in the GTC category as Duyver continues to gain experience ahead of a potential full attack on the championship next year. The second FF car is driven by Gary Eastwood and Rob Barff.

AF Corse have two cars in the race the #29 car for Spa 24 Hour winners Duncan Cameron and Matt Griffin and the #13 car for John Dhillon and Aaron Scott. Mtech complete the line up with the #41 car for Derek Johnston and Jake Rattenbury.

The championship will remember driver Allan Simonsen at the weekend – the long time British GT and former Ferrari driver was killed at the wheel of his Aston Martin at the Le Mans 24 hours. The front row of the grid will be left clear and a 60 second roar of engines will remember his life and racing career. The cars will also run modified door panels in honour of this incredibly popular driver who still stands 12 in the championship. The two hour race runs on Sunday from 13:40 BST.

On Saturday the Road America Circuit plays host to the Grand Am championship featuring four Ferrari. Craig Stanton returns to the wheel of the second Scuderia Corsa car after driving with the team at Watkins Glen, he is partnered by Ferrari Challenge North America driver Chris Ruud.

“I am excited to be back with Scuderia Corsa,” said Stanton. “Chris and I have worked together for a long time in Ferrari Challenge and I am honoured to support him in his first pro-race.”

The Scuderia Corsa team is completed by Alessandro Balzan – who currently stands third in the drivers’ championship – and Leh Keen in the #63 car. Jeff Segal and Max Papis will drive the #61 R. Ferri / AIM Motorsport car. Emil Assentato and Anthony Lazzaro, who currently sit joint forth in the championship complete the Ferrari lineup in their AIM Autosport Team FXDD #69 car. The two hour 45minute race run on Saturday from 4pm ET.

On Sunday, Road America plays host to round six of the American Le Mans Series, the two hour 45 minute race begins at 2pm ET. Leh Keen is back in action with Team West / AJR / Boardwalk Ferrari driving with Townsend Bell. After missing the previous, Canadian round of the series due to accident damage, Risi Competizione is looking forward to its ALMS return with Olivier Beretta and Matteo Malucelli at the wheel.