Australian GT Championship – The season gets underway in Adelaide 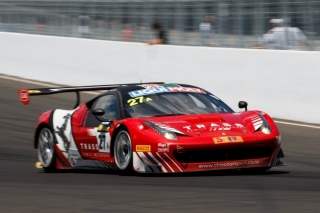 Maranello, 26 February – This weekend, the Adelaide street circuit hosts the opening round of the Australian GT championship. It will be the nineteenth running of the series that was actually first held in 1960, but went missing from the calendar several times. It was reborn in 2005, since when there has been at least one Ferrari on the grid every year. In the first season there were five 360 Modena Challenge cars and one 360 Modena GTC.

The first win. The first victory for a Ferrari came the following year and was down to the efforts of Danish driver Allan Simonsen, who was tragically killed while racing an Aston Martin at Le Mans in 2013. He won the first and third races of the weekend at Wakefield Park, at the wheel of the Consolidated Chemical Company team’s 360 Modena GTC.

The 2007 title. The following year, Simonsen was back with the same team and was a contender right from the start of the season. In the 360 Modena GTC, he won three out of three races at Eastern Creek, before taking two wins the following weekend in Adelaide. The Dane made it to the podium a further 14 times, finishing all the races in the points. He also won the final round at Sandown, this time at the wheel of the new F430, entered by Team Sirena.

The other seasons. In 2008, Simonsen switched to Maranello Motorsport, driving the F430, with which he won the first six races of the season. He took the two Sandown rounds, but in the end, the title went to Mark Eddy, with the Dane runner-up. Bowe was fifth. IN 2012, Peter Edwards won the Sydney race, while there were no victories in the next two seasons.

In Adelaide. As mentioned, the 2015 season starts in Adelaide, with three races over the course of a weekend which also sees Scuderia Ferrari represented, when its test driver Jean-Eric Vergne will drive a Formula 1 car along the streets that hosted the Australian Grand Prix from 1985 to 1995. There will be four Ferrari on track at the weekend, although one major player will be missing, the Maranello Motorsport number 88 car. The 458 was damaged at the Bathurst 12 Hours and has been shipped back to Italy for repairs. However, the second car entered by Mark Coffey’s team will be there, in the hands of Adrian Deitz and Cameron McConville. Apart from that, there will be two other 458s taking part: the Trass Family Motorsport entry for Jono Lester and Paul Kelly and the Trofeo Motorsport/Pirelli car driven by Jim Manolios and Ryan Miller. All these cars are entered in the Championship category. In the more junior Trophy category there’s one further Ferrari; Brenton Griguol is at the wheel of his own F430.