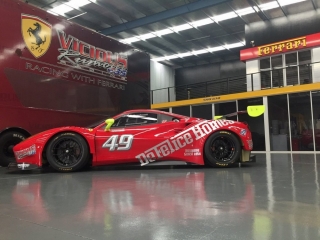 Melbourne, 16 March 2016 – A capacity grid of 32 cars are set to take the grid for the second round of the Australian GT Championship at Albert Park this weekend. Two weeks on from the opening round of the season in Adelaide, it marks the first time Australian GT has featured on the Formula 1 Australian Grand Prix programme since 2010.

Five Ferraris. A pair of Ferrari 488 GT3s will take to the circuit as Vicious Rumour Racing (with Andrea Montermini and Benny Simonsen) and Maranello Motorsport (with Tony D’Alberto and Peter Edwards) will give the Italian marque’s latest creation its global competition debut. Maranello Motorsport will also field one 458 Italia for Cameron McConville and Adrian Dietz. Another 458 Italia GT3 will be on track under the banner of Rosso Verde Racing and will be driven by Hector Lester. The F430 of Koala Motorsport of Brenton Griguol and Tim Macrow complete the five-car battalion for Melbourne.

Schedule. The Australian GT Championship has four 30-minute races across the 2016 Formula 1 Australian Grand Prix weekend. The first race starts at 18:15 on Thursday afternoon, with two qualifying sessions earlier in the day. Three further races follow from Friday to Sunday, with races three and four broadcast live as part of Channel Ten’s coverage of the Event.