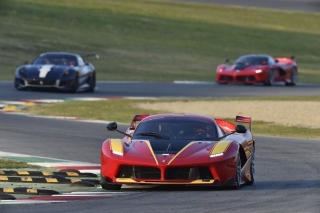 Jerez de la Frontera, 16 March – Ferrari Corse Clienti’s special initiatives, the XX Programmes and F1 Clienti, will kick off the 2016 season in Andalusia on Thursday. The XX Programmes use very limited edition cars developed exclusively for the track. Jerez will see six FXX Ks, the hybrid 1050 horsepower car that was presented for the first time at the 2014 Finali Mondiali in Abu Dhabi.

The other cars. As well as these six jewels of elegance and technology, nine 599XXs and one FXX, the first car in the XX Programmes, will be on track. The enthusiasts who own these cars will take part in a number of technical test sessions closely monitored by experts from Ferrari and will have the chance to meet Maranello’s engineers and professional testers in an environment in keeping with the tradition of the world’s most famous race team.

Formula 1. The XX Programmes cars will alternate with the F1 Clienti single-seaters. The Spanish circuit will also host some of the cars that have made the history of the category, such as the F2001 and F2003-GA winners of the world championship with Michael Schumacher. There will also be a 248 F1 of 2006 and an F2007, the legendary winner of the world title with Kimi Raikkonen in 2007.

Two intense days. XX Programmes and F1 Clienti customers will have six sessions in Jerez on Thursday, three for each of the two activities. Friday will be even more intense with four practice sessions. Olivier Beretta will be the tutor at Jerez de la Frontera. The former star of Formula 1 and Ferrari official GT driver in 2016 will take part in the Blancpain Endurance Series championship with the AF Corse team.