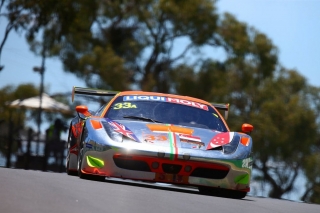 Bathurst 12 Hours – Montermini, Simonsen and Loberto from last to second 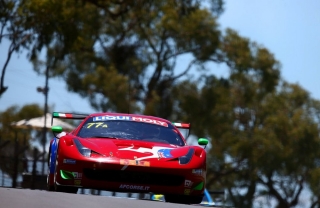 Bathurst, 8 February –From last to second in the Am category: that was the stunning feat pulled off by Andrea Montermini, Benny Simonsen and Renato Loberto in the Bathurst 12 Hours. After a disastrous qualifying, the trio was peerless in their Vicious Rumour Racing car and managed to make it onto the podium behind the overall winners, the Athlete Global Team Nissan crewed by Florian Strauss, Katsumasa Chiyo and Wolfgang Reip. Third was the Hallmark-Network Clothing Audi of Cini-Eddy-Mies. The other two Ferraris in this category, the 27 car entered by TFM Ferrari Motorsport New Zealand and the 29 car of Team Pirelli both had to retire.Pro-Am. There was disappointment for Ferrari in the Pro-Am class. AF Corse’s number 77 car led the race until it went out following a collision with the 36 Mercedes of Dean Canto, which saw it end up in the barriers, bringing out the Safety Car for the twelfth time in the race. In total there were 20 neutralised periods, a record in the history of this race. The other Ferrari also strugged: Mok Weng Sun, Toni Vilander and Matt Griffin had to settle for sixth place in the category that was won by the Phoenix Racing Audi driven by Mapelli-Vanthoor-Winkelhock.

D’Alberto heads home. Ferrari’s Bathurst 12 Hours had already got off on the wrong foot, when the Maranello Motorsport car, winner here in 2014, crashed heavily into the barriers during qualifying, with Australia’s Tony D’Alberto at the wheel. The team had to pull out and the driver had to go to hospital. However, D’Alberto has now been discharged and is heading home with wife Steffanie, thus escaping with a major fright and a few scratches.

Bathurst, 7 February –Qualifying went particularly well for two of the five Ferraris taking part in the Bathurst 12 Hours, the most important endurance race in Australia. Davide Rigon, Steve Wyatt and Michelo Rugolo took their 458 Italia GT3 to fourth on the grid (second in the Am category.) The car 77 crew posted a time of 2.03.840 to outpace the similar car of the Clearwater Racing team, driven by Toni Vilander and Matt Griffin, teamed on this occasion with Mok Weng Sun, who stopped the clocks in 2.04.058. That was good enough for sixth on the grid, (fourth in the Pro-Am category.)

The others. The number 27 car of TFM-Ferrari Motorsport New Zealand, crewed by Lester-McIntyre-Smith was 16th fastest, (eighth in their class) with a 2.05.004, while the number 29 car of the Pirelli team combination of Manolios-Miller-Capelli managed a 2.06.894 to start 25th, 15th in their category. The number 50 Ferrari entered by Vicious Rumour Racing was unlucky and will start from the very back, after Benny Simonsen ran into trouble and failed to do a single lap in qualifying.

D’Alberto is OK. Things were much worse for the Maranello Motorsport Ferrari 458. The car that won here in 2014 was seriously damaged and will not be able to start the race, which gets underway at 05h50 local time (19.50 CET) with live streaming of the event available on the site. Driving the 88 car at the time of the accident was Tony D’Alberto, who collided with the 99 Aston Martin of Yu-Venter-Merlin, hitting the barriers hard at the Forest’s Elbow corner. It was very disappointing for the Mark Coffey team and its other drivers, Mika Salo and Ben Collins, although the most important news is that hospital checks showed there were no lasting effects for D’Alberto. Pole went to the number 15 Phoenix Racing Audi of Mapelli-Vanthoor-Winkelhock in 2.02.552, while fastest in the Am category was the Athlete-Global Team Nissan, crewed by Strauss-Chiyo-Reip in 2.03.297.

Maranello, 4 February–This weekend sees the Bathurst circuit host its 12 Hour race, the most famous endurance event to be held in Australia. 53 cars are taking part, split into seven classes: six Ferrari 458s are entered in two of them.

Pro-Am Class. In the main GT3 Pro-Am class, there are two Prancing Horse cars. One is entered by the team that won here last year, namely Maranello Motorsport, running the number 88 car. Last year’s winning driver Mika Salo is back at the wheel, the Finn will partner with Englishman Ben Collins and Australia’s Tony D’Alberto, the latter having won a round of the GT Australia championship last year with an Il Bello Rosso team Ferrari. In the number 33 Clearwater Racing car, we find a distinctly prestigious crew: Ferrari factory driver and WEC World Champion Toni Vilander will be teamed with Ireland’s Matt Griffin, the 2013 ELMS champion, and the winner of the 2014 GT Asia series, Mok Wen Sung. The Prancing Horse cars will be lining up against entries from Mercedes, Bentley, Lamborghini, Audi and Aston Martin.

Am class. There will be a further four 458 Italias in the GT3 Am class. The Amato Ferrari-run AF Corse team can count on the skills of Ferrari factory WEC driver Davide Rigon, who will race alongside the winners of the 2014 Gulf 12 Hours, Australia’s Steve Wyatt and Italy’s Michele Rugolo. The Pirelli team’s 29 car will be driven by former Formula 1 driver Ivan Capelli and the Australians Jim Manolios and Ryan Miller, while Vicious Rumour Racing have entered the 49 car for Andrea Montermini, a front runner with Ferrari in the International GT Open series, as well as on occasional forays in the Blancpain series. The Italian shares the driving with Australia’s Renato Loberto and the Dane Benny Simonsen, brother of the late Alan. Finally, there will also be a car bearing the iconic Ferrari number, 27: it’s the TFM Ferrari Motorsport New Zealand car in the hands of New Zealanders Jono Lester, John McIntyre and Graeme Smyth.

Race facts and figures. The race is run on the Mount Panorama circuit in New South Wales. It’s a complicated track with no less than 23 corners. The start is at 5.50 am on Sunday (19h50 CET) and ends promptly half a day later. As for Ferrari’s track record, last year’s win courtesy of John Bowe, Peter Edwards, Craig Lowndes and Mika Salo was the first, but one should bear in mind that the Maranello cars only made their first appearance here in 2011.