North American Ferrari Challenge – A formidable race beneath the rain 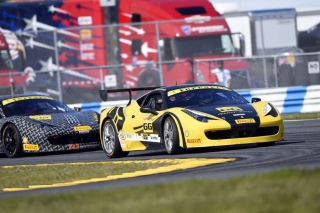 Daytona Beach, 24 January – The opening weekend for the 2015 North American Ferrari Challenge season came to a close today as the chequered flag waved brilliantly above the Daytona grandstands. The doubleheader weekend with the 24 Hours at Daytona enthralled Ferraristi as the second leg of the weekend was raced completely under heavy downpours. The high banks and hairpin turns were mirrored with translucent reflections along the speedway’s pavement.

Amidst the clouds and wet terrain, 29 drivers in the 458 Challenge EVOs raced in one of the most exhilarating races to open the 2015 season. Gregory Romanelli of The Collection, who started today’s race in sixth position, overtook five cars including that of pole sitter, Emmanuel Anassis of Ferrari of Ontario, within the first turn of the race. From there, Romanelli, Anassis, and Ricardo Perez of Ferrari of Houston, tailed each other for a majority of the race. Ultimately, Perez would overtake Romanelli at the end of the dogleg before climbing the banks at Turn 6. Perez finished first overall and for the Trofeo Pirelli class, with Anassis and Romanelli stepping on the second and third steps of the podium respectively.

The endurance was just as competitive for the Trofeo Pirelli AM drivers. With Robert Herjavec of Ferrari of Ontario leading his group from start to finish, there was a tight battle for second and third positions. After several spins at Turn 1, Arthur Romanelli of The Collection finished behind the Canadian. rookie Anthony Imperato of Ferrari of Long Island, who finished third, making this his first podium finish.

The second round of the 2015 Ferrari Challenge season will be held March 6-8 at Homestead-Miami Speedway in Miami, Florida.

North American Ferrari Challenge – First Round of Victories for Perez, Weiland and Anassis 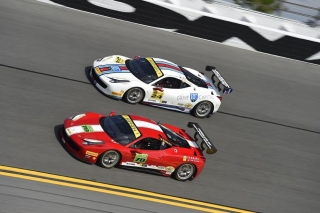 Daytona Beach, 23 January – The dark and tumultuous clouds did not overbear the 29 drivers of the North American Ferrari Challenge as they raced along the high banks and 12 turns of the Daytona International Speedway.

Beginning today’s race in pole position was Ricardo Perez from Ferrari of Houston. Following his world champion title from the Finali Mondiali last fall in Abu Dhabi, the Mexican continues to showcase his strength and talent, battling his ground as front runner. After a constant battle with Canadian Emmanuel Anassis from Ferrari of Ontario, Perez ultimately claimed his victory and finished first overall and in his Trofeo Pirelli class. Anassis finished a mere 1.349 seconds behind Perez in second place. Gregory Romanelli of The Collection, who had today’s fastest lap at 1:49.955, finished third.

New to the series this year is the Trofeo Pirelli AM class, with 12 drivers racing in this category. Finishing on top of the podium steps for this division was James Weiland of Ferrari of San Francisco. Standing in second place was Robert Herjavec from Ferrari of Ontario and closing the winners circle was Arthur Romanelli from The Collection. And just like his brother, Arthur held today’s fastest lap record for his division at 1:50:403.

As for the Coppa Shell class, some new faces stood on top of the podium steps. Jean-Claude from Boardwalk Ferrari claimed his first victory in his category. Saada was in the chase with Dan O’Neal of Ferrari of Ft. Lauderdale throughout the race. O’Neal finished second and Chris Cagnazzi Ferrari of Long Island closed in third.

North American Ferrari Challenge – The Return to the Banks of Daytona 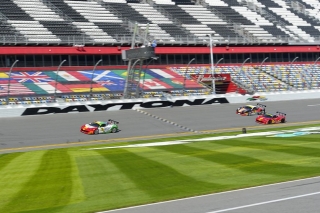 Daytona Beach, 22 January – With great anticipation, the Ferrari Challenge North America makes its return to the high banks of Daytona International Speedway for its 22nd season. The longest-running single-model championship series will run alongside the United SportsCar Championship supporting the first major race of the 2015 season, the 24 Hours of Daytona. The 3.56-mile, 12-turn circuit welcomes 29 drivers behind the wheel of the 458 Challenge EVO. Although the EVO (“Evoluzione”) kit was presented mid-season in 2014, it will debut for the first time at Daytona.
In addition to a season debut at Daytona, the Ferrari Challenge will travel to seven renowned North American racetracks this year. The series will make its return to Homestead in Miami at the beginning of March, then at Sonoma Raceway, and Circuit-Gilles-Villeneuve for the Formula One Canadian GP. Mosport and Mont-Tremblant encompass the summer months of racing with the Ferrari Racing Days held at Laguna Seca.
Qualifying first this afternoon with the fastest lap of 1:48:390 is Mexican driver from Ferrari of Houston, Ricardo Perez. Perez finished strong last year, claiming his world champion title for Trofeo Pirelli AM at the Finali Mondiali in Abu Dhabi.
The first of the two races will take place on Friday morning at 10:30 AM EST, with the second on Saturday at 9:45 AM EST, shortly before the start of the 24 Hours.