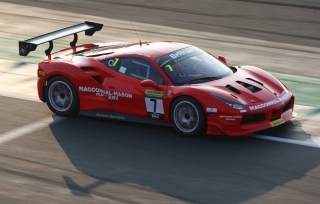 Maranello, 5 April 2019 – The Ferrari entrants at Silverstone enjoyed an extraordinary opening round of the Britcar Endurance Championship 2019. In Class 2, the 488 Challenges scored a one-two in Race-1 and swept the podium in Race-2.

Race-1. The 488 Challenge of JMH Automotive won Race-1 in Class 2 with Wayne Marrs and Charlie Hollings, ahead of reigning champions Paul Bailey and Andy Schulz in the twin car of SB Race Engineering. FF Corse’s entry, crewed by reigning Sprint Class 1 champions David Mason and Ross Wylie, finished seventh. Winners Marrs and Hollings crossed the line in third overall, while Mason and Wylie set the fastest lap in their class after also holding first position for four laps. The safety car came out and remained on track for four laps before the green flag flew again.

Race-2. The second race saw Ferrari score a fantastic hat trick, monopolising the podium with the crews of JMH Automotive, SB Race Engineering and FF Corse in that order. This result further confirms the excellent sprint capabilities of the 488 Challenge, which was also competitive on the single qualifying lap when the FF Corse crew notched up the best class time.

Qualifying. Ferrari also dominated the only qualifying round in this new championship format, with three cars taking the first three places in Class 2. The 488 Challenge of FF Corse, the fastest of the trio in 1:04.926, set the third best time overall, followed by that of JMH Automotive, for an all-red second row. SB Race Engineering’s entry qualified third in its class and in seventh overall.

Club. The second round of the British series will be held on 27 April, again at Silverstone. However, this time the participants will face each other in the ‘club’ configuration of the historic English track.