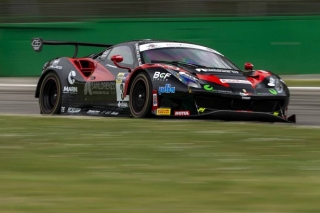 Monza , 7 April 2019 – The first round of the Italian GT Endurance Championship held on Sunday in Monza ended with a Ferrari on the podium and some regrets. The Ferrari 488 GT3 of Easy Race, with Mancinelli, Veglia and Cioci behind the wheel, finished second in a tricky race hampered by wet and changeable weather conditions.

First hour. After all the sessions in the dry, the competitors had to deal with the rain that fell on the Lombard track in the hours and minutes immediately before the race began. The drivers set off behind the safety car that returned after two laps, as did the 488 GT3 of Scuderia Baldini with Stefano Gai at the wheel who stopped to mount slicks. Di Amato began his determined climb up the standings and very quickly moved into fourth, imitated by the Ferrari of Mancinelli. On lap three, the 488 of AF Corse retired with 18-year-old Simon Mann driving the car into the pits. A few minutes later Di Amato also replaced the tyres although, against his will, he was forced to return to the pit lane again when the rain increased in intensity. The pit lane became crowded once more as the mechanics waltzed around the cars. When the situation returned to normal, Di Amato lapped in some very fast times, moving into second position with Gai’s 488 GT3 behind him. Mancinelli, brilliant in the opening stages, was in eighth an hour into the race.

Second hour. A few laps before handing over to Vezzoni, Di Amato had to deal with a puncture suffered at the Roggia, forcing him to complete almost an entire lap on three wheels and, above all, opening the way ahead to Stefano Gai who, shortly after, handed over to Jacques Villeneuve. The Canadian, once the obligatory stops were over, took the race lead, while Veglia, who had replaced Mancinelli, was seventh. Vezzoni, in eighth, made way for Di Amato. Meanwhile, the track was still wet even though the sun had started to peep out. Villeneuve, in his debut in the Italian GT, stretched his lead over his rivals to more than 12 seconds. Unfortunately for him, the safety car – which came on 1h21 minutes from the end – compacted the group, thwarting the efforts of the former Formula 1 world champion. When the race resumed, Villeneuve regained a small lead, while the young Veglia took advantage of the situation, to claim third in his 488 GT3.

Third hour. The third and final hour yielded many surprises, unfortunately not all pleasant for Ferrari. The track, now dry in many places, encouraged the drivers to switch permanently to slicks when changing drivers. Villeneuve handed over to Fisichella in first while Cioci, who replaced Veglia at the wheel of the Ferrari of Easy Race, was fourth but very close to Andrea Palma. The two fought it out at different points of the track but Cioci got the better of the Roman driver with a masterful manoeuvre out of the first chicane. On the other hand, Fisichella in the lead started to suffer problems causing him to slow down and then retire on lap 74. At this point, the best of the Ferraris remaining was that of Cioci who used all his experience to fight off Andrea Palma’s attempt to reclaim second position. The second Ferrari still on the track, that of RS Racing with Di Amato at the wheel, attempted a difficult recovery after the puncture, but unfortunately was still far off the podium. The trio of Mancinelli, Veglia, and Cioci crossed the line in second, three hours after the start, while the 488 GT3 of Di Amato and Vezzoni was in eighth. 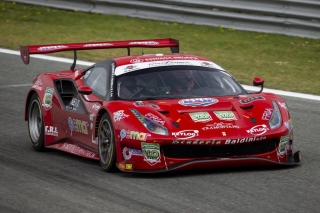 Monza, 6 April 2019 – The Ferrari no. 27 crewed by Giancarlo Fisichella, Stefano Gai and Jacques Villeneuve will start on the front row in tomorrow’s Endurance race at Monza, the first round of the Italian GT Championship. The starting grid, calculated by adding up the times of the individual drivers, will see the Scuderia Baldini trio start from second.

Two Ferrari 488 GT3s will occupy the fourth row; with the cars driven by Di Amato and Vezzoni (RS Racing), and Mann, Cressoni and Nielsen (AF Corse) starting ahead of the twin car crewed by Mancinelli, Cioci and Veglia (Easy Race).

Q3. In the third and final session, the official GT competition driver, Giancarlo Fisichella, stopped the clock at 1:46.667, the fastest lap of all three qualifying sessions. The Scuderia Baldini driver recorded this time on lap four of seven recorded. Daniele Di Amato clocked the third fastest time in every session on the Lombard circuit. Matteo Cressoni (AF Corse) finished in the wake of the RS Racing driver, while Daniel Mancinelli (Easy Race) came ninth.

Live race. The three-hour race sets off at 2.10 pm on Sunday. You can follow its progress on the official championship website: http://www.acisport.it/it/acisport-service/live-streaming/ita 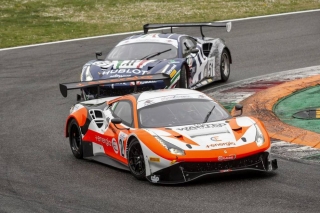 Monza, 5 April 2019 – The 17th edition of the Italian Gran Turismo Championship opens at the Autodromo Nazionale di Monza, in a new format that has immediately met the approval of teams and drivers. Four Ferrari 488 GT3s will line up at the start, all equally in with a realistic shout for the title, including one total newcomer: Jacques Villeneuve.

Villeneuve and 27. The fans are very keen to see the Canadian 1997 Formula 1 World Champion and winner of the 1995 Indianapolis 500, who will be flanked by crewmates Stefano Gai – 2016 Italian GT3 Champion – and the official GT and ex-Formula 1 driver Giancarlo Fisichella. The Scuderia Baldini trio will carry the number 27, a fascinating and exciting connection with Gilles Villeneuve, one of the best-loved drivers in the history of the Prancing Horse.

Ambitious crews. The other 488 GT3 teams are no less ready for the fray. Marco Cioci will once again take the wheel for Easy Race, teaming up with Daniel Mancinelli and Lorenzo Veglia, while Matteo Cressoni and the youngsters Simon Mann and Nicklas Nielsen drive for AF Corse. Daniele Di Amato and Alessandro Vezzoni, who also competes in the Ferrari Challenge, are also ready to do battle in the colours of the RS Racing-CDP arriving from the GT Open.

Programme. The action begins on Sunday at 2.10 pm, with the first of the four three-hour races in the Endurance series, while the Sprint, which includes two 50-minute + 1 lap races, will start from Vallelunga from 3 to 5 May.