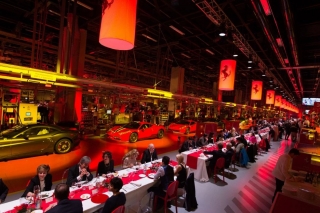 The new V8 the star of two preview evenings in Maranello

Maranello, 20 February – More than 800 clients from all over the globe enjoyed the privilege of being the first to admire the Ferrari 488 GTB at close quarters. The Prancing Horse’s latest creation will not officially be unveiled until the Geneva Motor Show but has already proven the undisputed star of two evenings at Maranello.
The guests were treated to not one but two exclusive experiences. Firstly, they were given a preview tour of the new GES building which itself will be officially inaugurated in the near future. Later, they were taken to the 8-cylinder assembly line on which the 488 GTB is to be built, for the highlight of the evening: the unveiling of the new car. This was followed by a gala dinner.

Their hosts for the evening were Ferrari Chairman Sergio Marchionne, CEO Amedeo Felisa and Commercial and Marketing Director Enrico Galliera. Four-times World Champion Sebastian Vettel also made a dramatic entrance at the wheel of a 488 GTB.