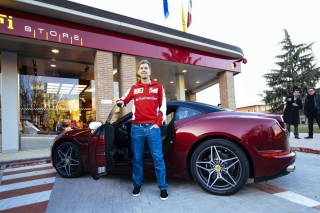 Maranello, 20 February – On the eve of his departure for Barcelona for his second pre-season test session in the new SF15-T, Sebastian Vettel spent two very intensive days working with the Scuderia’s technicians. Happily, he also managed to squeeze in a visit to the Carrozzeria Scaglietti, Ferrari’s bodyshell facility in Modena, before driving the California T back to Maranello where he signed the counter in the Ferrari Store. Vettel was guest of honour at two special 488 GTB preview evenings too.