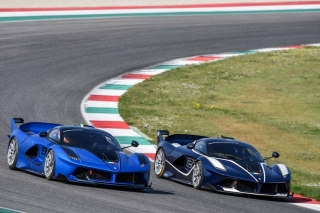 Scarperia, 13 April 2017 – The second and final day of testing for the cars of F1 Clienti and XX Programmes were held at Mugello. The second day saw no less of a show, with some of the most successful cars of the last 15 years alternating on track with the special cars of the XX Programmes. These extreme sports cars can only be driven on track although they are not approved for any championship.

Queen. The FXX Ks held court on the ups and downs of the Tuscan track, being the most numerous cars at the event. Indeed, Mugello was graced by 10 examples of one of the most special cars ever to have been driven through the gates of Maranello, endowed with over 1000 hp and hybrid technologies deriving from Formula 1. The special customer-testers took advantage of the perfect conditions at Mugello to push their cars to the limit and then study the telemetry together with the engineers.

The other jewels. The other cars of the XX Programmes, the 599XX, 599XX EVO and the FXX, the first model of a project that last year celebrated its 10th anniversary, also raced around the Arrabbiatas, San Donato and Bucine corners.

Special Award. A special event was held on Wednesday evening when the mechanics of F1 Clienti joined the customers for a cocktail event at the racetrack to present an award to someone special, Giuliano Tacconi, who recently exceeded 500 Formula 1 Shakedowns. His is a life in “red” and one marked by limitless passion. 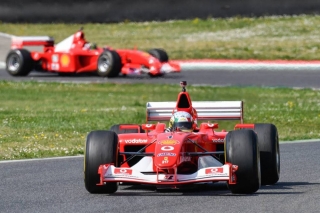 Scarperia, 12 April 2017 – It was the first day of testing at Mugello for the special customers of the XX Programmes and F1 Clienti, who felt the irresistible pull of one of the world’s most beautiful tracks to attend an event with 30 single seaters and GT cars that can only be driven on track.

Kings of the track. The Formula 1 cars at Mugello included the best in the category so far this century. Indeed, some customers drove the F2001 with which Scuderia Ferrari repeated the famous “Red Dawn” of Suzuka 2000. The Maranello team dominated the 2001 season winning the Drivers’ title with Michael Schumacher and the Constructors’ one thanks to Rubens Barrichello in car no. 2. Mugello also saw a F2002, the record breaking car that won 15 races out of 19 in the 2002 and 2003 seasons and was the vehicle in which Michael Schumacher won his fifth Drivers’ championship and Ferrari its 12th Constructors’ title.

Unmistakable sound. The roar of Formula 1 engines is even more fascinating on the ups and downs of the Tuscan track, because the valley in which the circuit is built acts like a giant echo chamber. It is amazing to hear the 2.4-litre naturally aspirated engine of cars like the F2007, the world Constructors’ and Drivers champion with Kimi Raikkonen, and the F2008, another world Constructors’ champion, which also came very close to the Drivers’ title with Felipe Massa. There were also a F150° Italia and a F138, the last generation of the car not equipped with a hybrid power unit and that gave full voice to the 056 engine and its output of almost 800 hp.