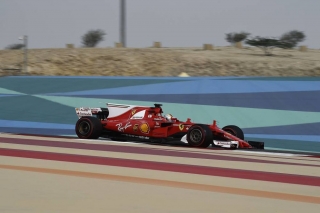 After testing for Pirelli, a day dedicated to development

Sakhir, 19 April – This time there was no need to extend the test session: at 18h00 local time, (17h00 CET,) Seb Vettel parked the SF70H in the pits at the end of the day’s work. 67 laps were completed, the best in 1’31’”574, set on the Soft compound. Yesterday, the Bahrain GP winner had been testing for Pirelli, while today it was a normal programme of development for the season. “It would be nice to have done even more,” said Sebastian at the end of the day. “But today we had a few little problems in the morning, which is normal for testing and then, in the afternoon, we lost some time when there was an electrical black-out in our garage.” That’s not unheard of during testing, when so many sets of tyres are used that the tyre blankets can soak up quite a bit of energy. “In any case, driving this car is always a pleasure,” concluded Seb. “The times don’t mean much, given we don’t know what programmes the others are running.”

That marks the end of the first in-season test of 2017. The next one takes place in July in Hungary. 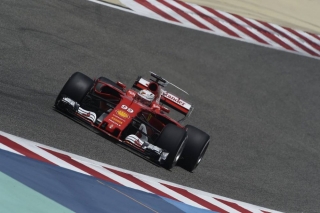 Giovinazzi’s first drive in the SF70H; 93 laps in Bahrain

Sakhir, 18 April – “I enjoyed every single lap.” On every one of the 93 times that he sped past the Scuderia Ferrari pits, Antonio Giovinazzi must have had a big grin on his face under the helmet. It’s true that he’d already experienced a Prancing Horse Formula 1 car in Fiorano and is au fait with what Formula 1 is all about in 2017. However, the Ferrari he drove in that first test was the SF15-T, not bad for a first run but two years old. And when it came to this past winter testing and the first two GPs of the season, that experience came at the wheel of a Sauber.

But, truth be told, for an Italian driver, the first “real” day was surely this Tuesday in Bahrain. Antonio’s day began with a massage and some breakfast and that was followed with no less than nine hours of testing and even as we write, the technical debrief is still ongoing. Antonio showed maturity and professionalism at the wheel, setting a best lap of 1’31”984 on Supersoft tyres, although he spent more time running the Mediums and also when downloading information with his engineers. “To drive the car that won the last race and is leading the world championship, working with the Scuderia Ferrari engineers and mechanics, is not just a great feeling, it’s a dream I’ve had since I was little and racing in karts. And today it came true.”

The reality of testing however could be seen elsewhere, as Seb Vettel was working late into the evening, to make up for time lost earlier in the day, as he was at the wheel of another SF70H, working on a separate programme, tyre testing for Pirelli.