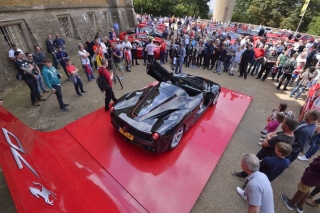 25 July 2017, Nottingham, UK – On a gloriously sunny day in Nottinghamshire, 150 Ferrari cars were in attendance at the beautiful Belvoir Castle, as part of Graypaul Nottingham’s 70 Years of Ferrari celebrations. With models including two Enzos, a handful of Speciales, Dinos and an F40, along with a very special 1952 212/225 Inter Vignale, the event truly was a sight to behold.

Huge crowds of the public attended in their thousands at the packed venue and were in very high spirits – with everybody enjoying the magnificent display of cars from throughout Ferrari history before enjoying Italian-themed picnic lunches in the sunshine on the lawns of the Castle.

People young and old were in attendance taking photographs and mingling with Ferrari owners who were only too happy to share their passion for the magnificent brand. Also present was former Fifth Gear presenter Jonny Smith, who posed for photographs and chatted with visitors about all things Ferrari, having arrived in the new GTC4Lusso T.

At 17:30, the enormous parade began, winding its way through Nottinghamshire countryside into Nottingham city centre, where hundreds of onlookers had gathered to capture the moment as the 150-strong parade passed by Nottingham Castle, waving 70th Anniversary flags and cheering the parade by.

The parade ended with an evening party at the Graypaul Nottingham showroom, with live entertainment and the reveal of the 812 Superfast to a roaring applause and camera flashes.