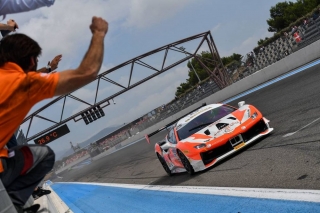 Le Castellet, 22 July 2017 – Daniele Di Amato, Tommaso Rocca and Henry Hassid won on the first day of the Ferrari Challenge Europe at Le Castellet in France, with some spectacular races in the new 488 Challenge.

Coppa Shell. The Coppa Shell kicked off the day’s racing, with Henry Hassid very fast right from the start. The French driver of the Charles Pozzi team pulled up alongside poleman Johnny Laursen (Formula Racing) before overtaking him with an extreme manoeuvre that forced both drivers off track. Erich Prinoth (Ineco-MP Racing) followed the pair, but was soon under pressure from Rick Lovat with the 488 Challenge of Kessel Racing. Lapping quickly Hassid and Laursen pulled away from the rest of the group, while Eric Cheung (Formula Racing) also burned up the rubber to close in on Lovat and Prinoth. Further back Fons Scheltema (Kessel Racing) and Christophe Hurni (Team Zenith Sion-Lausanne) fought tooth and nail for sixth, challenged only at the beginning by James Weiland (Rossocorsa) who was hit by Claudio Schiavoni (Kessel Racing), then penalised with a drive-through. Hassid further extended his lead over Laursen to win by six seconds while Cheung caught up with his two rivals to earn a splendid podium. Prinoth finished in fourth, overtaking Lovat on the final lap, while Hurni took sixth in front of Scheltema. Manuela Gostner (Ineco-MP Racing) sealed eighth place and victory in the Ladies’ Cup that now leads having overtaken Fabienne Wohlwend in the points standing. The Gentlemen’s Cup went to Hassid at his second win in three races in the Ferrari Challenge Europe.

Trofeo Pirelli. Andrea Gagliardini got the better of his CDP teammate Daniele Di Amato at the start of the Trofeo Pirelli race. However, the championship leader retook first place at Signes at the end of the first lap. He then continued unchallenged clocking up some very fast laps. All hell broke loose behind him though: Bjorn Grossmann (Octane 126) approached Gagliardini and attacked him but the two 488 Challenge cars came into contact, allowing third placed Philipp Baron (Rossocorsa) to take advantage, passing Gagliardini before the finish line and Grossmann shortly after the first corner. In addition, the German’s overtaking was deemed irregular and so the reigning European champion had to yield the position to Gagliardini. In the final part of the race Di Amato held onto his lead to collect his fifth consecutive victory of 2017 and consolidate his position at the top of the standings. Baron and Grossmann took the other two podium steps, while fourth place went to Sam Smeeth (Stratstone Ferrari) ahead of Gagliardini and Alessandro Vezzoni (Rossocorsa-Pellin Racing).

Pirelli Am. The Trofeo Pirelli was a much steadier race, but one that, paradoxically, saw the leadership change at the top of the championship standings. Tommaso Rocca had seemed right at the top of his game since qualifying in which he had won pole position. In the race itself he drove the 488 Challenge of Rossocorsa leading from start to finish. Chris Froggatt (HR Owen) threatened the Italian’s lead throughout, but never found an opening from which to mount an attack. Jens Liebhauser (Formula Racing) took the third step of the podium and was enough for the day because Martin Nelson (Scuderia Autoropa) had a very negative race with two drive-through penalties due to an irregular start and then a contact with teammate Robin Jensen. Liebhauser is now leading Nelson in the championship standings. Galip Atar (Octane 126) notched up a first career win, beating Walter Ben Dorrenberg (Ferrari Eberlein) in the Trofeo Pirelli 458. It’s the same again on Sunday with the Coppa Shell at 12:50 pm and the Trofeo Pirelli at 3:35 pm. 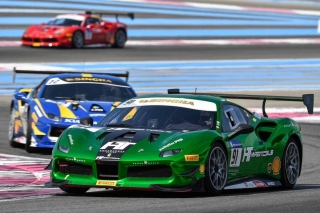 Le Castellet, 21 July 2017 – This weekend, the fourth round of the Ferrari Challenge Europe will see forty 488 Challenges battle it out on the Circuit Paul Ricard. The meeting is in effect a sort of trial run for the French Grand Prix, which will be back on this track in 2018, after a 28-year absence: the last team to win was Ferrari with Alain Prost in 1990.

Trofeo Pirelli. Championship leader Daniele Di Amato is looking for another two wins to consolidate his position in the absence of Fabio Leimer (Octane 126). However, it won’t be a stroll in the park for the CDP driver, who is certain to be strongly challenged by Philipp Baron (Rossocorsa), Bjorn Grossmann (Octane 126), Alessandro Vezzoni (Rossocorsa-Pellin Racing), Sam Smeeth (Stratstone Ferrari) and his teammate Andrea Gagliardini.

Pirelli Am. The Trofeo Pirelli Am class will be the scene of a new episode in the duel between Martin Nelson (Scuderia Autoropa) and Jens Liebhauser (Gohm Motorsport). The pair have monopolised the season so far with the exception of Chris Froggatt (HR Owen) who won the second race in Budapest. Also of note is the arrival in the European Series of Marc Muzzo (Kessel Racing) after a brilliant race in the Challenge North America during the Ferrari Racing Days at Mosport Park.

Coppa Shell. Johnny Laursen tops the standings in the Coppa Shell, with two wins and two podiums. The Formula Racing driver knows the track well, having driven it in the GT championships and it won’t be easy for anyone to beat him. However, we should keep an eye on the highly experienced Eric Cheung and his teammate Rick Lovat, along with Fons Scheltema (Kessel Racing) and Erich Prinoth (Ineco-MP Racing). Cheung and Lovat are also first and second in the Coppa Shell standings, while the Ladies’ Cup is still led by Fabienne Wohlwend, who is not in the race, and is just one point in front of Manuela Gostner (Ineco-MP Racing). Deborah Mayer (Kessel Racing) and Tina Kok (Formula Racing) are also competing.