Ferrari Racing Days – Over 40.000 people at Shanghai to share their Prancing Horse passion 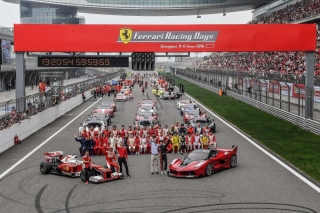 Shanghai, 11 June 2016 – This weekend in Shanghai, returned the well-known Ferrari Racing Days for the sixth consecutive year, with more than 40,000 Ferrari enthusiasts descending on the Shanghai International Circuit for an enthralling programme with the Maranello super cars. Joining customers, fans, and media, were a vast array of highlights, including stirring Corse Clienti activities consisting of F1 Clienti, XX Programmes and Challenge APAC, a stunning fleet of the revolutionary new hybrid Ferrari FXX K and historic cars such as the 330 GT 2+2, Testarossa, 512 BBi. There was space also for the special limited editions like LaFerrari, Enzo, F12tdf, a rare displays of historical Formula 1 cars, and celebrity such as famous musician and actor, as well as the owner of FXX K, Aaron Kwok; Competizione GT Driver and Official Scuderia Ferrari Test Driver, Andrea Bertolini, all gathered to celebrate a shared passion for the Ferrari racing culture of performance and lifestyle.

Guan Yu Zhou. Further confirming the Ferrari dedication to the development of motorsport in China, was the guest appearance of the first Chinese Ferrari driver, Guan Yu Zhou. After winning three races and finishing second in the 2015 Italian Formula 4 Championship at only 16 years of age, Guan Yu Zhou is on the path to stardom. The fan favourite joined owners for laps of the circuit and enjoyed photos with dedicated Ferrari fans.

Driving a Ferrari. All the admiration for Ferrari’s finest works, made a chance to get behind the wheel of a prancing horse too hard to resist for many fortunate guests. During a series of test drives and hot laps with professional Ferrari instructors, selected guests were given the opportunity to experience the thrills of the current model range, including the exhilarating Ferrari 488 GTB and 488 Spider, the engaging California T and thrilling F12berlinetta, discovering the true potential of each Ferrari creation on the long straights and flowing corners of the Chinese Formula 1 circuit where Ferrari has enjoyed unrivalled success.

Global event. Ferrari Racing Days is always the ideal platform for family reunion, from the Ferrari Challenge Race Simulator, to an extensive display of Ferrari Formula 1 replica cars, there were Ferrari activities around the paddock for enthusiasts of all ages and interests. The Kids Corner not only enhanced the parenting through close interactions, but also helped to extend visitors’ knowledge of traffic safety. A further highlight of Ferrari Racing Days was the dazzling display of Ferrari 488 GTB and California T in Tailor-made mode. 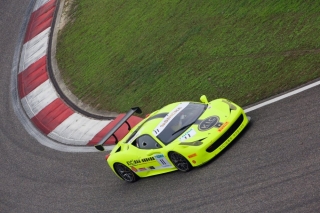 Shanghai, 11 June 2016 – The third round of the 2016 Ferrari Challenge Asia Pacific ended its Race 2 in Shanghai International Circuit as a highlight of very successful 2016 Ferrari Racing Days in Shanghai. With Ferrari F1 cars, 11 new hybrid Ferrari FXX K, some classic models including 330GT, Testarossa, 512 BBi and also limited edition such as Enzo, LaFerrari, F12tdf showing on this traditional F1 track, all 25 drivers and their 458 Challenge EVO lights on the passion among around 40000 Tifosi joining in this biggest event of Prancing Horse in Asia-Pacific area.

Trofeo Pirelli. Again and again, it was a very competitive fight among Steve Wyatt, Renaldi Hutasoit and Florian Merckx. In Race 2, Renaldi Hutasoit from Indonesia starting from pole position finally back to the top on the podium, which help him to close the gap to championship leader Steve Wyatt. Belgian Florian Merckx made the fastest lap of Race 2 and came across the finish line only after winner while Steve Wyatt got the third place.

Pirelli Am. Chinese driver Xin Jin extended his good feeling on this track and achieved a back-to-back win in both races of the third round. Chinese drivers looked to find some more advantage in their home race. Following the winner, Yanbin Xing and Ting Zheng became the second and the third in this group to pass the waving chequered flag.

Coppa Shell. In the Coppa Shell class, it was Chinese driver Huiling Han that reclaimed first position after winning Race 1 yesterday at the Shanghai International Circuit. The same as Pirelli Am group, three Chinese drivers undertook the whole thing of podium. Liang Wang and Yuan Yang took the podium positions alongside Huiling Han.

Schedule. The next round of the Ferrari Challenge APAC will be at Sepang, in Malaysia, from 5 to 7 August. 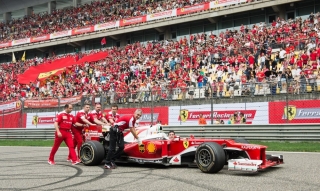 Shanghai, 10 June – Adults and children, the inquisitive and the passionate, and people of different nationalities flocked to the International Circuit on Friday, the penultimate day of the Ferrari Racing Days at Shanghai. The roar of the engines drew the public to the F1 Clienti and XX Programmes pits while on Sunday it will be the turn of Scuderia Ferrari to put on a show, with Andrea Bertolini to meet the fans and entertain them with a stunning exhibition at the wheel of the Formula 1 Ferrari. 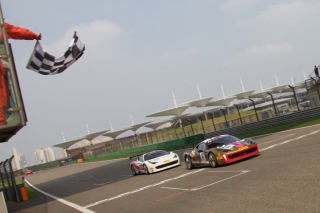 Shanghai, 10 June, 2016 – The third round of the 2016 Ferrari Challenge Asia Pacific took place on the Shanghai International Circuit, China earlier today to kick off the very spectacular Ferrari Racing Days in Shanghai. The field with 25 drivers harnessed the power of their 458 Challenge EVO cars on this famous F1 track to full effect in a breathtaking display of Ferrari’s sporting heritage.

Trofeo Pirelli. Steve Wyatt, Renaldi Hutasoit and Florian Merckx continued their tight competition all the race. In the end, the 2015 Asia Pacific Champion Steve Wyatt starting from pole position got another win here with a race time of 31’30,292 to extend his lead on championship. Renaldi Hutasoit from Indonesia back to podium and got the second place while Florian Merckx continued his stable performance to achieve the fourth podium finish in last five races.

Pirelli AM. Chinese driver Xin Jin claimed his first win this season across the finish line in first place following an assured performance. The battle of win in this group is between both Chinese drivers who performed better in hometown races while Ting Zheng also achieved his first podium in this championship. And Jeff Youn from Korea was the third in this group.

Coppa Shell. In the Coppa Shell class, it was Chinese driver Huiling Han reclaimed first position after winning Race 1 in Abu Dhabi. Ken Seto from Japan continued his steak on second position with the fourth runner-up in five races. And another Chinese driver Liang Wang who improved hugely this season came in third. 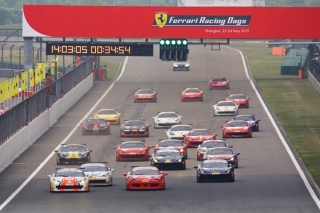 Shanghai, 9 June – The Ferrari Challenge APAC is back on track this weekend with one of the most anticipated races of the season, which takes place during the Ferrari Racing Days in Shanghai, one of Asia’s main motorsports events. Twenty-nine cars will be on track for the third round of the season. They will include almost all the champions of the category in the three classes, Trofeo Pirelli, Pirelli Am and Coppa Shell.

Trofeo Pirelli. The rankings are extremely tight in the Trofeo Pirelli, with Steve Wyatt on top after his victory in Abu Dhabi and two podiums. However, the Australian is only one point ahead of Belgium’s Florian Merckx, winner of Race-1 at Suzuka, and two in front of Renaldi Martin Hutasoit, winner of Race-2 and second in Race-1 at Suzuka. All three drivers will battle it out on the spectacular Shanghai International Circuit.

Pirelli Am. Canada’s Eric Cheung tops the standings in the Pirelli Am class. He is favourite in Shanghai on a wave of enthusiasm after his victory in Race-2 at Abu Dhabi and two second places in Suzuka. His closest rival is China’s Xin Jin, who has notched up two podiums so far this season, while America’s James Weiland is in the reckoning after two wins at Suzuka.

Coppa Shell. The Coppa Shell has the clearest front-runner, China’s Liang Wang who has enjoyed an extraordinary start with a one-two at Suzuka and victory in Race-2 at Abu Dhabi. His closest rival is Japan’s Ken Seto, with three second places in four races. Race-1 is scheduled for 2:15 pm on Friday (8:15 pm CET) while Race-2 will be on Saturday at 1:45 pm (7:45 pm CET).

Challenge APAC – A lap at Shanghai with Xin Jin 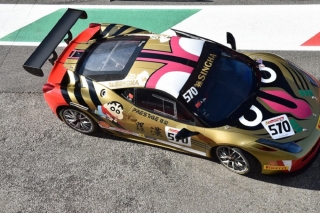 Shanghai, 9 June – Chinese driver Xin Jin, currently second in the Pirelli AM standings drive us around the Shanghai International circuit driving his fantastic Ferrari 458 Challenge EVO. The track is fantastic with a perfect mix of slow and fast corners and some very long and fast straights, including the longest one of the year. Xin will try to win the race but will have to face the championship leader Eric Cheung. 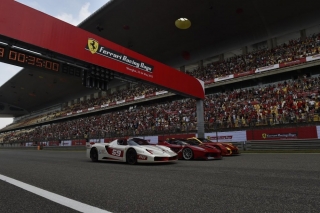 Shanghai, 8 June 2016 – The Ferrari Racing Days of Shanghai are about to start at the iconic International Circuit, where with more than 40,000 Ferrari enthusiasts are expected for an enthralling programme with the Maranello super car manufacturer. Among the activities the most anticipated are the Corse Clienti XX Programmes and F1 Clienti and obviously the APAC Challenge series. The most famous one-make series in the world at Shanghai will have his third round of the season with all the stars of the series fighting for first place. On the traditional Formula 1 venue there will be three cars running, two F2004 and an F10 of 2010. Talking about XX Programmes 11 FXX K cars are expected on track alongside two 599XX EVOs and an FXX the car that kicked off this activity more than ten years ago.

Cars and drivers. Other highlights of the weekend will be a stunning fleet of historic cars such as the 330 GT 2+2, Testarossa, 512 BBi, limited editions like LaFerrari, Enzo, F12tdf, rare displays of historical Formula 1 cars, and celebrity such as famous musician and actor, as well as the owner of FXX K, Aaron Kwok; Competizioni GT driver and official Scuderia Ferrari Test Driver, Andrea Bertolini and Chinese young Ferrari Driver Academy talent, Guan Yu Zhou, all gathered to celebrate a shared passion for the Ferrari racing culture of performance and lifestyle.

A complete experience. Ferrari Racing Days is also the ideal platform for families, from the Ferrari Challenge Race Simulator, to an extensive display of Ferrari Formula 1 replica cars, but also the Kids Corner. A further highlight of Ferrari Racing Days will be the dazzling display of Ferrari 488 GTB and California T Tailor-made. The event will kick off on Thursday and will last three days, until Saturday: a fantastic Ferrari full immersion to have a complete Prancing Horse experience.