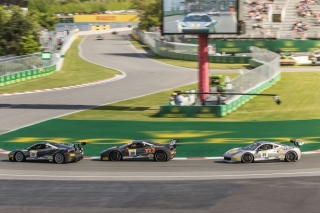 Montreal, 12 June 2016 – A cold and bitter wind swept through the Ferrari Challenge paddock as the teams and drivers made their preparations for the final race of the weekend. As the V8 engines of the 458 Challenge EVOs were warmed up beneath each team’s hangar, drivers conversed and analyzed strategies with their coaches. Spectators of the weekend were also beginning to find their seats in the various grandstands that hover above the 2.71-mile circuit.

Trofeo Pirelli. Every year, June marks the return of the Ferrari Challenge to Circuit Gilles Villeneuve in support of the Formula One Grand Prix. In line with the packed weekend schedule, qualifying for Race-2 was set by the current championship points after yesterday’s showcase. Montrealer Emmanuel Anassis (Ferrari Quebec) started on the pole in his home turf and lead the race from start to finish. Although a majority of the race was held under caution due to an incident involving Lance Cawley (Ferrari of Beverly Hills), the early action on the circuit was intriguing. Anassis and Gregory Romanelli (The Collection) battled it out in the first corner after the front stretch, with Carlos Kauffmann (Ferrari of Ft. Lauderdale) following on their tails. Anassis finished in first place with Romanelli in second and Kauffmann in third for the Trofeo Pirelli class. Kauffmann did mark the fastest lap with a 1:39.153.

Pirelli Am. James Weiland (Boardwalk Ferrari) found himself again standing atop the podium steps. He gained his lead ahead of Steve Johnson (Ferrari of Ft. Lauderdale) in the early laps before the caution flag came out. Patrice Brisebois (Ferrari Quebec) maintained his pace to finish second behind Weiland. Johnson closed the winners podium in third place for Trofeo Pirelli Am.

Coppa Shell. Although he was short of winning in yesterday’s competition, Joe Courtney (Miller Motor Cars) finished first in his class today. In second place was Chris Cagnazzi (Ferrari of Long Island) and Rick Lovat (Ferrari of Ontario) in third. The Coppa Shell class saw side-by-side action by Jean-Claude Saada (Boardwalk Ferrari) and Barry Zekelman (Ferrari of Ontario). Zekelman was veered off course for which Jean-Claude suffered a penalty due to incident responsibility.

Next round. The Ferrari Challenge will return to Lime Rock Park in Connecticut for the fifth round of the 2016 North American season September 23-24. Follow and continue the conversation at @FerrariUSA using #FerrariChallenge. 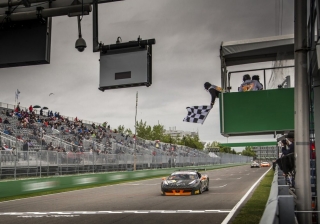 Montreal, 11 June 2016 – In continued tradition, the Ferrari Challenge opened the weekend in support of the Formula One Canadian Grand Prix in Montreal, Quebec. The 2.71-mile circuit dubbed after Gilles Villeneuve, one of Scuderia Ferrari’s most recognized drivers, welcomed fans from across the globe to witness another series of racing spectacles. From the SF16-H of the Scuderia Ferrari to the 458 Challenge EVO of the Ferrari Challenge, the Prancing Horse emblem could be seen from all sides of Parc Jean-Drapeau.

Trofeo Pirelli. The practice sessions proved to be essential on Friday as a majority of the 35 Ferrari Challenge drivers were new to Circuit Gilles-Villeneuve. Understanding the movement of the track, known for its tight quarters and sharp hair pin turns, is essential to a pilot’s success in Montreal. But Gregory Romanelli (The Collection), a double winner here last year, was ready for another round of successes. Qualifying with the fastest lap in a slight, frigid drizzle, Romanelli started the race sitting in pole position. As the flag waved green, the cars charged through the first turn, with Romanelli and Emmanuel Anassis (Ferrari Quebec) driving tete-a-tete. Anassis had a slight peek ahead in the first portion of the 25-minute race, with Carlos Kauffmann (Ferrari of Ft. Lauderdale) advancing on both their tails. As the track went under caution due to an incident with Rob Hodes (Ferrari of Washington), Kauffman was able to advance to the lead but served a drive through penalty for incident responsibility. Romanelli crossed the tributary “Salut Gilles” finish line in first place, with Anassis coming in second, and Kauffman in third for the Trofeo Pirelli class.

Pirelli Am. James Weiland (Boardwalk Ferrari) maintained his lead for the Trofeo Pirelli Am class from start to finish. Although he made his driving look effortless, Weiland maintained a keen eye in his mirrors, defending his position ahead of Marc Muzzo (Ferrari of Ontario) and Arthur Romanelli (The Collection). Muzzo has stood above the podium steps in Montreal on several occasions and was ready for another. Romanelli, however, was not going to back down. Both drivers finished with nearly a three tenths of a second difference. Romanelli finished in second place and Muzzo in third.

Coppa Shell. Rick Lovat (Ferrari of Ontario), who last raced at the Daytona International Speedway with the North American series, maintained his Coppa Shell lead throughout the first race of the weekend. Intermingled between the drivers of the Trofeo Pirelli Am class, Lovat was followed closely by Chris Cagnazzi (Ferrari of Long Island) who finished in second place. And in third place was the Dutchman Fons Scheltema, who also races for the European series.

Race-2. The drivers compete once more tomorrow at 11:05 AM EDT (17.05 CET). Directly following the Ferrari Challenge podium ceremony, the racing celebrations ensue with the customary parade laps of all Formula One drivers around the circuit. The Canadian Grand Prix begins at 2:00 PM EDT (20.00 CET). 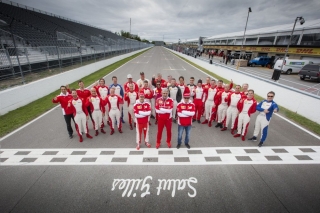 Montreal, 10 June 2016 – Summertime has arrived in the city of Montreal, and as the greenery flourishes besides the grand city avenues, so do the crowds making their pilgrimage for the Parc Jean-Drapeau for Formula One celebrations. The Tifosi travel vast lengths in support of Scuderia Ferrari, but so do the 35 drivers of the Ferrari Challenge, representing the United States, Canada, Venezuela and the Netherlands. The longest running one-make series makes its annual return to Circuit Gilles-Villeneuve for the fourth round of racing this season in support of the Canadian Grand Prix

Championship ensues. Going into the weekend, the 2015 North American champion Emmanuel Anassis (Ferrari Quebec), returns to his home turf leading the Trofeo Pirelli class with 92 points. But following with just 7 points behind is the young Gregory Romanelli (The Collection) who saw a double victory here in Montreal last year. He’s keen on delivering the same performance and stand high above the podium steps again. Steve Johnson (Ferrari of Ft. Lauderdale) continues to showcase his strong zeal in the Trofeo Pirelli AM class. Maintaining a lead with 94 points, Johnson has stood on the podium steps at each race this season. But Patrice Brisebois (Ferrari Quebec) and James Weiland (Boardwalk Ferrari) remain in tight contention with only 1 point separating the two drivers. Joe Courtney (Miller Motor Cars) has seen the most success this season, accumulated 107 points thus far, greatly increasing his lead in the Coppa Shell championship.

Schedule. The Ferrari Challenge has run here since 1993, and as tradition ensues, the racing spectacles of the weekend will sure delight. Today’s schedule sees two practice sessions. Qualifying is reserved for Saturday morning and the first race of the weekend at 3:35 PM EDT. The second race will precede the Canadian Grand Prix at 11:05 AM EDT with the F1 race going green at 2:00 PM EDT.