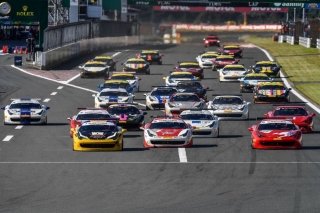 Oyama, 16 October 2016 – The second race of the Round 6 of the Ferrari Challenge APAC saw the crowning of the first 2016 champion. Liang Wang sealed the Coppa Shell in a race won by teammate Jie Xu. In the Trofeo Pirelli Florian Merckx notched up his fourth consecutive victory while local hero Hiroyuki Kishimoto took the spoils in the Pirelli Am.

Trofeo Pirelli. In the early stages championship leader Florian Merckx held off the attacks of Alex West, a quick start from Steve Wyatt, and Renaldi Hutasoit, while behind a damaging contact between George Chou and Toru Tanaka put both out of contention. At the end of the first lap Wyatt overtook West who soon pulled out with gearbox problems. Debris on the track forced the race officials to bring on the Safety Car and at the restart Merckx found himself under extreme pressure from Hutasoit. However, the Belgian fought tooth and nail to record a fourth straight win and probable title, which he should wrap up at the Finali Mondiali in Daytona from 1 to 4 December. “It has been fantastic to race in the APAC series this year – he said – and was great to collect four wins in a row. Thanks to all the people helped me a lot, starting from Philipp Baron and the Baron Service guys.”

Pirelli Am. There were thrills and spills in the Pirelli Am class where championship leader Xin Jin made a rare mistake. The Chinese driver attacked James Weiland, clashing with the American and damaging his 458 Challenge EVO. Jin was forced to retire, which gave Eric Cheung and Hulin Han a chance to fight for and secure second and fourth places. However, the battle for victory was an all-Japanese affair between Max Go and rookie Hiroyuki Kishimoto, in his second one-make series race. Kishimoto led Race-1 before Han rammed into him, while in Race-2 he did very well avoiding contact with Go. Kishimoto won to the delight of his compatriots who were treated to a rendition of the Japanese national anthem, ahead of Cheung, Go and Han, with the now re-opened championship that will be decided at Daytona. Kishimoto said: “It was the first time in APAC Challenge and I really enjoyed. I hope I have the chance to repeat this great experience”.

Coppa Shell. The Coppa Shell race was just as spectacular. At the start championship leader Liang Wang was in first ahead of Ken Seto, Paul Montague and China’s Xiao. However, it was soon apparent that this was not how the race would end. On his Ferrari Challenge APAC debut, Jia Xu began a great comeback after starting from the back of the grid due to the incident in Race-1. The Chinese driver steered clear of a number of accidents, including one between Japan’s Takeshi Kitai and Hideaki Watanabe, dropping into the leading group in the final laps. First he overtook Paul Montague, whose fourth place was enough to win the Gentlemen’s Cup, and then even managed to stick the nose of his 458 Challenge EVO ahead of local hero Ken Seto. At that point, Liang Wang, who was anyway certain of winning the title, left victory to his teammate. Xu at the post-race press conference said: “It was my first weekend in the Challenge and I really enjoyed. I’m used to race other brands’ cars but Ferrari has always been my favorite. It was simply amazing”.

Now the Finali Mondiali. The Ferrari Challenge APAC will be back on track in December for the final round of the season. It will take place at Daytona, when, after the winners of the class Trofeo Pirelli and Pirelli Am will be decided, the drivers of this series will also compete with the Europeans and Americans for the world champion titles. 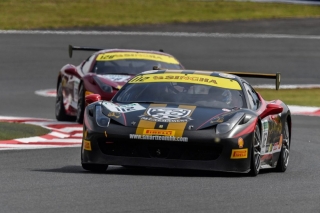 Oyama, 15 October 2016 – Fuji fully confirmed its reputation as a special circuit in the first race of the sixth round of the Ferrari Challenge APAC championship. It was no coincidence, on a day full of twists and turns, that the winners were the three drivers who top the Trofeo Pirelli, Pirelli Am and Coppa Shell rankings.

Trofeo Pirelli. The first race of the weekend delivered excitement right from the start. Poleman Steve Wyatt maintained first place ahead of championship leader Florian Merckx and Toru Tanaka, who was soon passed by Renaldi Hutasoit. Merckx kept his eye on Wyatt and approached him on lap 4. After six laps Wyatt’s lead was cut further and while braking for the first corner of lap 7, the Belgian completed his overtaking manoeuvre. He then immediately pulled away from the Australian also setting the fastest lap. A little later Hutasoit caught up with Wyatt but failed to move past him into second. Merckx has the title firmly within his sights after the third consecutive win: “I was very careful not to make mistakes. I waited for the best moment to attack and when I realised my pace was superior I overtook Wyatt. Then I focused solely on my race and won this victory that is so important for the title.”

Pirelli Am. There were also thrills and spills in the Pirelli Am class where Hiroyuki Kishimoto initially did the lion’s share of the work, taking advantage of the collision between Huilin Han and Max Go. The Japanese driver, who started from pole, quickly regained the lead overtaking Eric Cheung and seemed set for an extraordinary win when Han hit him with a few laps to go. The Chinese driver, author of the fastest lap, crossed the finish line first but was penalised so the victory went to championship leader Jin Xin ahead of Cheung and the USA’s James Weiland. “I preferred to race carefully avoiding troubles and letting my rivals complicate life for themselves,” said Xin. “This tactic paid off because I managed to pick up maximum points.”

Coppa Shell. The Coppa Shell race was no less spectacular. Championship leader Liang Wang set off cautiously and was overtaken by Sky Chen who emerged victorious from a hard contact with an opponent. However, after a few laps his 458 Challenge EVO showed that it had paid dearly for the clash, with the right-hand door beginning to open on left-hand turns. Wang soon overtook Chen, clocking up the fastest lap. Chen arrived at the finish line in second but was later disqualified for ignoring the black flag ordering him back to the pits to repair the damage. Ken Seto was thus promoted to second while Paul Montague was third, also winning the Gentlemen’s Cup. With this win Liang Wang has virtually sewn up the title: “I am very happy with my season and in Race-2 I aim to wrap things up before the Finali Mondiali in Daytona.”

Safe car. On the last lap Yuan Yang offered further proof of the safety of the 458 Challenge EVO. The Chinese driver, who was fighting on track for a position, lost control of his car and collided violently against the guardrail. The barrier was destroyed while the driver escaped from the car unhurt. The programme will be repeated on Sunday with Race-2 at 9:10 am local time (2:10 am CET). 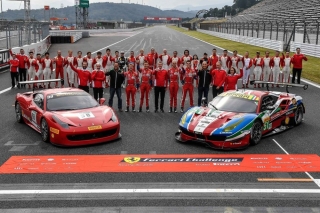 Oyama, 14 October 2016 – The 2016 Ferrari Challenge Asia-Pacific sixth and last round race before the Finali Mondiali at Daytona gets underway at Fuji Speedway this weekend as a support series to the prestigious World Endurance Championship, WEC Thirty cars will take to the track today for two rounds of free practice before returning on Saturday for the only qualifying session and Race-1, while Race-2 will take place on Sunday. Standing in the foothills of Mount Fuji in Oyama, Japan, Fuji Speedway will see lots of thrilling action on track this weekend as the drivers will battle it out in the final round at a track known for having one of the longest straights among motorsport tracks in the world: 1.475 km in length. The Challenge drivers will also have the opportunity to discuss race strategies over the weekend with the Ferrari WEC drivers Gianmaria “Gimmi” Bruni, James Calado, Davide Rigon and Sam Bird.

Trofeo Pirelli. After Round 5 in Singapore, Florian Merckx from Belgium is leading the table standings In the Trofeo Pirelli class with 164 points after his double wins there. Renaldi Hutasoit of Indonesia is a close second only 5 points behind. In third place is Steve Wyatt from Australia with 147 points. Wyatt was leading the standings after four rounds until he suffered crash damage in Singapore during the first race and had to retire. They will definitely have victory on their minds this weekend.

Pirelli AM. Xin Jin from China continues to lead the Pirelli AM class with 151 points, followed by Eric Cheung from Canada and Huilin Han with 137 and 135 points respectively.

Coppa Shell. Meanwhile, Liang Wang from China in Singapore increased his lead in the Coppa Shell category with a total of 173 points, a 54-point advantage over fellow compatriot Yuan Yang. Ken Seto from Japan is third with 106 points.

Race Schedule. The Challenge drivers will undertake two rounds of practice sessions today, with the first race tomorrow at 3:30 PM local time (8.30 CET) and the second race on Sunday at 9:10 AM local time (2.10 CET).