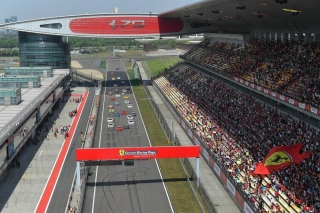 Shanghai, 28 May,2017 – The second round of the 2017 Ferrari Challenge Asia Pacific took place on the Shanghai International Circuit in China earlier today to kick off the very spectacular Ferrari Racing Days in Shanghai. Including more than 10 Chinese drivers to race at hometown, the field with 29 drivers harnessed the power of their Ferrari racing cars on this famous F1 track to full effect in a breathtaking display of Prancing Horse’s no-limited speed ambition and Ferrari’s sporting heritage.

After making its world motorsports debut in the opening round in Abu Dhabi, the latest Ferrari 488 Challenge car show its extreme competitiveness in Shanghai International Circuit. This 5.451kilometer-long track has a world famous long straight on which the drivers could push their cars to limit especially at the end of this straight, cars can reach its extreme top speed before hard breaking.

Trofeo Pirelli. Local hero Huiling Han finished perfect adjustment from the accident in last round. Starting from pole position, Han kept his steady performance to the end. Being the first to see waving chequered flag, Han got his very first win of this season. Angelo Negro and Philippe Prette both are from Italy. They two overcame the not-perfect performance in Qualifying and offered a very strong race performance. Angelo Negro pushed Huiling Han tightly until the finish line. Only 2 second gap brought him a runner-up and Philippe Prette got the third position onto podium.

Pirelli AM. Japanese driver Go Max won the Pirelli AM class in his first race this season who came back to Ferrari family after missing the opening round. Chinese driver Yanbing Xin continued his stable working from the start of season and got another runner-up. Ken Seto from Japan caught the last position on podium.

Trofeo Pirelli 458. Eight drivers competed in this class with their Ferrari 458 Challenge EVO cars. The fight in this class is particular exciting with lots of over-take trying and hard defend. Australian Martin Berry who performed very strong in the opening round kept this trend. Retiring couldn’t hide his smooth pace in the race weekend. In the end, Hidehiko Hagiwara from Japan won in this class and two Chinese drivers Min Xiao and Sky Chen got the other two positions of podium in turns.

Coppa Shell. In the Coppa Shell, nine drivers raced in three small group having tight fight. Japanese Makoto Fujiwara was the first to cross the finish line in this class. Alan Yeo followed the winner’s pace in only 1 second. Chinese driver Kan Zang was the third in this class. David Dicker from New Zealand was the winner of the Gentlemen Cup and Kanthicha Chimsiri from Thailand took the Ladies’ Cup.