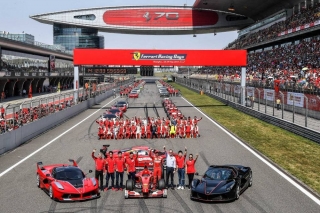 Shanghai, May 29, 2017 – The widely acclaimed Ferrari Racing Days returned this weekend to Shanghai for the seventh consecutive year, with more than 150 national media and 47,000 passionate Ferrari owners and enthusiasts descending on the Shanghai International Circuit for a gripping and exhilarating programme with the Maranello manufacturer that makes the world dream about Italian excellence.

Show on the circuit. Customers, fans, and media enjoyed a dazzling array of highlights including the Corse Clienti activities which consisted of F1 Clienti, XX Programme and APAC Challenge with the new 488 Challenge, the seventh car prepared for the one-make series and the first turbo engined. In the paddock a stunning fleet was available made up of a record number of classic cars, each of which reflects Ferrari’s 70 years; and innovative Maranello new creations such as the most powerful Ferrari 812 Superfast and the revolutionary LaFerrari Aperta, the iconinc car of the 70th anniversary. The ambitious programme was enhanced by a star-studded list of special guests and celebrities such as the renowned actor William Feng, famed singer and actor Jimmy Lin; the talented young Chinese race driver Guan Yu Zhou, member of the Ferrari Driver Academy (FDA); and some of the brands’ most passionate Ferrari Owner Club (FOC) leaders. To finish on a high spectators on the grandstands were thrilled by the F1 Show featuring official Ferrari driver Andrea Bertolini and the Scuderia Ferrari mechanics.

Excitement beyond the track. Following the successful opening of the Tribute to Ferrari – 70th Anniversary Exhibition at Shanghai Auto Museum, the Italian supercar manufacturer presented some of its most stunning classic cars from the Museum to Shanghai International Circuit, including the legendary 195 Inter, the glorious Testarossa that was first made available in 1984, the pioneering front-engined V12 car 550 Maranello, and the highly coveted 599 GTO created in 2010. 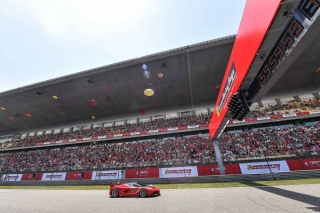 Shanghai, 29 May 2017 – The famous Ferrari Racing Days returned to Shanghai over the weekend for the seventh consecutive year. Over 47,000 Ferrari enthusiasts descended on the Shanghai International Circuit for an enthralling programme with the Maranello super cars and the unique flavour of the 70thanniversary celebrations. Customers, fans, and media, enjoyed a vast array of highlights, with exciting Corse Clienti activities involving F1 Clienti, XX Programmes and Challenge APAC with the brand new 488 Challenge car. There was also space for special limited editions like the LaFerrari and LaFerrari Aperta, the iconic car of the 70th anniversary.

Guan Yu Zhou. The guest appearance of the first Chinese Ferrari driver, Guan Yu Zhou, further confirmed Ferrari’s dedication to the development of motorsport in China. Yu Zhou is currently competing in the European Formula 3 championship. The fans’ favourite joined the circuit for some laps and had his photo taken with Ferrari enthusiasts. As usual during the Ferrari Racing Days the paddock was packed with fans wanting to have a go on the simulators and to see the whole range on display.

Ferrari Challenge. The second round of the Ferrari Challenge APAC series featuring the brand new 488 Challenge car was one of the most anticipated events of the weekend. Around 30 drivers from three continents took part in the two races, with the most brilliant performances coming from local hero Huilin Han, Italy’s Philippe Prette, and Japan’s Makoto Fujiwara and Go Max.

Global event. The fans in the stands on Monday, the final day of the event, also had the chance to see the Ferrari Show performed by Andrea Bertolini and the Scuderia Ferrari mechanics. The driver thrilled the people with some fast laps and burnouts, while the mechanics performed some lightning pit stops. In the end Bertolini and all the guys from Ferrari were met with fantastic applause by the thousandths of enthusiasts flocking the grandstands.

The exhibition “Under the Skin” will remain at Maranello until November 2017, while “Infinite Red” is open until the end of the year. The Ferrari Museum is open every day from 9:30 am to 7 pm (from November to March it closes at 6 pm). 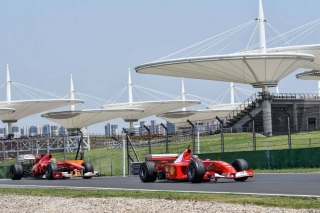 Shanghai, 28 May 2017 – The Ferrari Racing Days are under way at Shanghai involving the Ferrari Challenge APAC but also the special customers of the XX Programmes and F1 Clienti, who felt the irresistible pull of one of the world’s most beautiful tracks to attend an event with thousandths of people on the grandstands.

World champions. The Formula 1 cars at Shanghai included the best in the category so far this century. Indeed, the fans had the chance to see an F2001 with which Scuderia Ferrari repeated the famous “Red Dawn” of Suzuka 2000. The Maranello team dominated the 2001 season winning the Drivers’ title with Michael Schumacher and the Constructors’ one thanks to Rubens Barrichello in car no. 2. The Chinese track also saw two F2004, the record breaking car that dominated the season with Michael Schumacher winning his seventh and last title.

Unmistakable sound. The roar of Formula 1 engines is even more fascinating on the long straight of the Shanghai International Circuit. It is amazing to hear the 2.4-litre naturally aspirated engine of cars like the F2007, the world Constructors’ and Drivers champion with Kimi Raikkonen, and the F10, with which Fernando Alonso was so close to winning another world title for Ferrari.

Ferrari Racing Days – The show is about to start at Shanghai 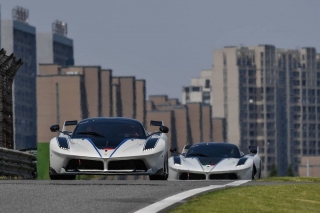 Shanghai, 26 May 2017 – The Ferrari Racing Days of Shanghai are about to start at the iconic International Circuit, where, from Saturday to Monday, more than 25,000 Ferrari enthusiasts are expected for an enthralling programme with the Maranello super car manufacturer in the 70th anniversary of the brand. Among the activities the most anticipated are the Corse Clienti XX Programmes and F1 Clienti and obviously the APAC Challenge series. The most famous one-make series in the world at Shanghai will have his second round of the season with all the stars of the series fighting for first place on the brand new 488 Challenge cars, the seventh car in the 25-year history of the championship and the first turbo engined.

F1 Clienti and XX Programmes. On the traditional Formula 1 venue there will be six cars running, two F2004, two F10 of 2010 plus two world championship winning cars: an F2001 used by Michael Schumacher and an F2007 driven during his dream season by Kimi Raikkonen. Talking about XX Programmes, seven FXX K cars are expected on track with their astonishing power of 1050 hp.

70th Anniversary. Other highlights of the weekend will be a stunning fleet of cars and owners all gathered to celebrate a shared passion for the Ferrari racing culture of performance and lifestyle. In the paddock the entire road range will be displayed and fans will have the chance to see the fantastic LaFerrari Aperta, the iconic car of the 70th Anniversary.

A complete experience. Ferrari Racing Days is also the ideal platform for families, from the Ferrari Challenge Race Simulator, to an extensive display of Ferrari Formula 1 replica cars, but also the Kids Corner. A further highlight of Ferrari Racing Days will be the Ferrari show on Monday, when Andrea Bertolini and the Scuderia Ferrari mechanics will put on an incredible show made of accelerations, fast pitstops and burn outs.