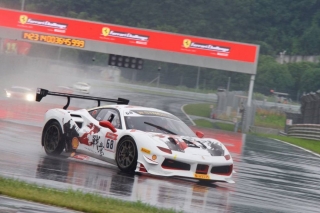 Zhejiang Shaoxing, 10 June,2017 – The third round of the 2017 Ferrari Challenge Asia Pacific finished its second race earlier today on the Zhejiang International Circuit which is located in Shaoxing of Zhejiang Province in China. The heavy rain bothering Yangtze River Delta region from north to south became the leading role today while Evan Mak from Hong Kong won in Coppa Shell and Australian Martin Berry defended his winning in the Trofeo Pirelli 458, the only two classes competing on Sunday.

Coppa Shell. The field in the Coppa Shell showed very pretty drive on wet track. Evan Mak from Hong Kong was the first one to cross finish line in this class bringing back his maiden win in Ferrari family. Korean Andrew Moon got the second place while local hero Eric Zang caught last position on the podium. Grant Baker from New Zealand was the winner of Gentlemen Cup. And Kanthicha Chimsiri from Thailand won the Ladies Cup today.

Trofeo Pirelli 458. In this class drivers raced with their Ferrari 458 Challenge EVO cars in which Martin Berry from Australia who won the Race 1 in this weekend got another win making double wins in this third round of 2017 Ferrari Challenge Asia-Pacific championship. Hidehiko Hagiwara from Japan was the runner-up catching a two-consecutive podium finish and Sky Chen from Hong Kong got the third place in this class.

Schedule. Finishing two races of the Round 3, next round of this year’s Ferrari Challenge Asia Pacific will come to Japan in July 7th to 9th. In Fuji circuit, it will be the fourth round of the calendar. 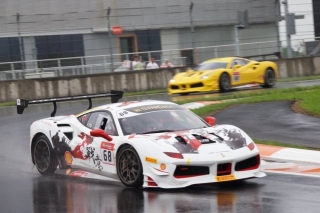 Zhejiang Shaoxing, 10 June, 2017 – The third round of the 2017 Ferrari Challenge Asia Pacific took place on the Zhejiang International Circuit earlier today. The whole new circuit based in Shaoxing of Zhejiang Province in China. Including 13 Chinese drivers to race at hometown, the field with 28 drivers harnessed the power of their Ferrari Challenge racing cars on this new international class track to full effect in a breathtaking display of Ferrari’s sporting heritage and Prancing Horse’s spirit to make ongoing progress on the way to overcome one and another new challenge. With a 3.20-kilometer lap layout, the newly built Zhejiang International Circuit is the latest international class track in China. This very unique anti-clock circuit was built around a hill which brought its very challenge high-low design made it very demanding on technical and physical.

Trofeo Pirelli. Italian driver Philippe Prette kept his outstanding status. Catching a third place and a first place in last race weekend in Shanghai, he started from pole position in this race and kept advantage in the whole course to be the first one to waving chequered flag which brought him a back-to-back win. Starting from front row as well, Zen Low from Malaysia had a clear start and then kept chasing the leader. With no more overtake chance, the Malaysian driver got second place in this race. And the third podium position came to Japanese driver Go Max who was just promoted from Pirelli AM to Trofeo Pirelli in this race weekend.

Pirelli AM. Five drivers competed in Pirelli AM class this weekend among which local hero Jia Xu matched high expectation and won in this class. In the Race-1, the Chinese driver kept very strong pace even better than those of some drivers from higher class. Ken Seto from Japan and Eric Yeo from Malaysia was the second and the third in this class.

Trofeo Pirelli 458. Seven drivers competed in this class with their Ferrari 458 Challenge EVO cars. Very popular local driver Min Xiao had an accident at the start and retired quite sadly. In the end, Australian driver Martin Berry kept his winning trend. Hidehiko Hagiwara from Japan was the runner-up and Chinese driver Sky Chen caught the last position on the podium.

Coppa Shell. In the Coppa Shell, there was also an accident in first lap. Chinese driver Eric Zang who performed quite well in last round started from pole position in this class while he retired very regrettably cause of the start accident. Charles Chan from Hong Kong showed great race pace crossing the finish line firstly and got his first win in Ferrari Challenge series. Hideo Honda and Makoto Fujiwara both from Japan got the second place and the third place. While Hideo Honda is also the winner of Gentlemen Cup, Kanthicha Chimsiri from Thailand kept the Ladies’ Cup. 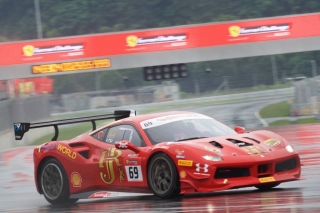 Maranello, 9 June 2017 – The words “Ferrari Challenge Days” give us a clear idea of the weekend ahead. Indeed, this weekend all three of the world’s most famous single-make continental series will be in action, stopping-off at three very special tracks.

Europe. The European series is in Monza for the second meeting of the season. After the first race in Valencia, the championship will be at the temple of speed where cars accelerate to 300 km/h before slowing down at the first chicane, taking full advantage of the 650 hp of the turbo power unit that won the Engine of the Year award. The leading competitors in the three championship classes include Switzerland’s Fabio Leimer, Sweden’s Martin Nelson and the highly experienced Rick Lovat. We should mention the return of Coppa Shell champion, Thomas Loefflad, as well as the arrival of a new woman in the championship, 19-year-old Fabienne Wohlwend from Liechtenstein.

North America. The North American series goes to Montreal where, as is now traditional, it is the support race for the Formula 1 Grand Prix. On Thursday, the championship drivers had their photos taken with the two Scuderia Ferrari drivers, Sebastian Vettel and Kimi Raikkonen. Peter Ludwig is someone to keep an eye on in the Trofeo Pirelli but Martin Fuentes is geared up to cause him problems. In the Trofeo Pirelli Am all eyes are on Chris Cagnazzi, while in the Coppa Shell Karl Williams is the favourite.

Asia-Pacific. The Asia-Pacific series will be in China where it has the prestigious task of inaugurating the new track in Zhejiang. Various Chinese drivers, along with other representatives from all over Asia, will battle it out on the 3.2km built around a hill. Italy’s Philippe Prette is the favourite in the Trofeo Pirelli, but Chinese fans are looking to Yanbin Xing. In the Coppa Shell, Japan’s Makoto Fujiwara has totally dominated the series so far.