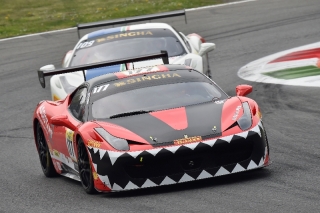 Monza, 6 April – An exciting second race among those chasing the win in the Coppa Shell. Victory went to Dutch Fons Scheltema, at the wheel of the Kessel Racing 458 Evo. Second place went to the Italian Massimiliano Bianchi, third was Swedish Christian Kinch. 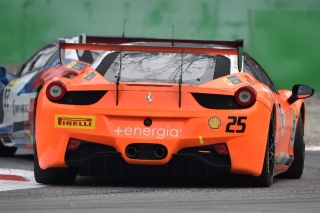 Monza, 6 April – In the second Trofeo Pirelli race at the Monza circuit, victory went to Daniele Di Amato, who was unbeatable driving his Motor Piacenza 458 Challenge Evo. The Roman driver was in total command of the situation after an early duel with Philipp Baron, then excluded by a puncture. Once he pulled away, Di Amato did a good job of controlling the race. Second was Dario Caso (Rossocorse-Pellin Racing) who overtook Stefano Gai on the last straight having been slowed by a puncture.

In the Pirelli Am battle, Sam Smeeth, driving for the Stratstone Ferrari team dominated the race. Behind him the was a great duel between the Motor Piacenza drivers Alexander Moiseev and Ezequiel Perez Companc. The battle was won, in the last lap, by the 20 year old Argentinian.

In top spot championship classification after two races is Stefano Gai, but he’s going to leave the series to concentrate on Endurance racing. So the real leader is Di Amato that leads over Dario Caso. In the Pirelli Am category, the leader after one weekend of racing is Perez Companc. The next round is at Mugello from 16 to 18 May. 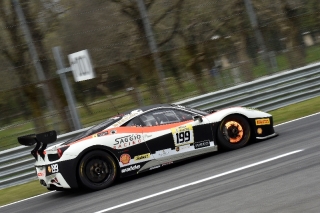 Monza 5 April – Excitement, spectacle and thrills in the first Coppa Shell and Coppa Gentlemen race of the season. Dominating the first round was Dirk Adamski at the wheel of the Saggio Racing Team 458 Evo. Second place went to Italian Massimiliano Bianchi (Kessel Racing) that crossed the line just 0”359 behind the leader.

Third place went to Belgian Jacques Duyver (Stratstone Ferrari) who finished with a delay just under three seconds. Poleman’s race Erich Prinoth was ruined at the start when the Italian lost first place to Adamski and went off the track at the Roggia chicane.

As for the Coppa Gentleman, for drivers over 55, victory went to the Canadian driver Rick Lovat (fourth overall) in the Kessel Racing entered car, beating Dutch team mate Fons Scheltema (fifth) and the Italian Thomas Gostner. The disappointed and defeated won’t have to wait long to try again as the second race takes place at 16h20. 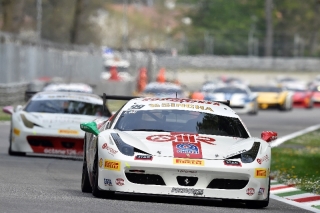 Monza, 5 April – The European series of the Ferrari Challenge, with all competitors at the wheel of the 458 Evo, began with a really exciting race. Race 1 of the Trofeo Pirelli was won by the Italian Stefano Gai, driving for the Rossocorsa team that was able to set a stunning Grand Slam having obtaines pole position and fastest lap winning the race leading from start to finish. The winner took the flag ahead of the Austrian Philipp Baron (team Octane 126). In a solitary third place was Dario Caso (Rossocorsa-Pellin Racing). Good fourth Di Amato, able to recover after a bad start.

There was another close fight in the Pirelli Am category, won by Giacomo Stratta, who did a great job in the Forza Service 458 Evo, to finish 5th overall. Second in the category was the baby Argentinian (just 20 years old) Ezequiel Perez Companc (Motor Piacenza) who had a hard fought battle to beat Slovakian Tomas Kukucka (Scuderia Prah-Dino&Co).

Tomorrow, the show starts all over again with the second race of the season, which should give an indication as to whether today’s front runners could be season long contenders. Start time is 14.05 and excitement is guaranteed. 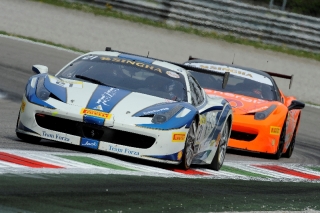 Monza, 4 April – Giacomo Stratta and Jacques Duyver were fastest in free practice for the Ferrari Challenge Europe round at Monza, with Sunday’s racing being free to attend for spectators. Stratta was surprisingly fastest of the Trofeo Pirelli drivers in a very closely matched session. The Forza Service driver is in the Amateur category and so he should have been slower than the Pros. This year’s series uses the 458 Challenge Evo and Stratta used his to set a time of 1.51.194, on the fourth of his 12 laps. He was 124 thousandths faster than Stefano Gai, the Rossocorsa Pro and 442 thousandths faster than Austria’s Philip Baron in the Octane 126 car.

Testing took place in the morning and in the first session these two drivers had posted faster times than the one Stratta did to take first place in free practice. Philipp Baron stopped the clocks in 1.50.856 ahead of Gai’s 1.51.092. Qualifying is at 9.55 while Race 1 is at 14.50. More of the same on Sunday with qualifying and the race.

Quickest in the Coppa Shell, Englishman Jacques Duyver in his Stratstone Ferrari lapped in 1.52.306. It was an impressive half a second quicker than the German Dirk Adamski (Saggio Racing Team) and almost nine tenths ahead of Italy’s Massimiliano Bianchi for Kessel Racing. In the Coppa Gentlemen, the spotlight shone on the veteran Erich Prinoth who was fourth overall in the 458 Evo entered by the Ineco-MP Racing team, ahead of team-mate Thomas Gostner and Dutchman Fons Scheltema for Kessel Racing. Qualifying is tomorrow at 11.15 with the race at 16.45 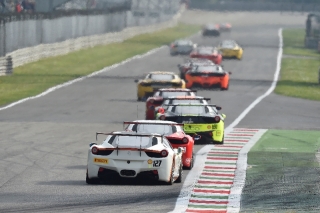 Monza, 4 April – On a rain-free Monza track, free practice for the Ferrari Challenge are underway. The longest running series of the famous one-make championship has now reached its 22nd season and some of the drivers have been present at two thirds of them. Among them Italy’s Dario Caso (Rossocorsa-Pellin Racing) and the Czech Robert Pergl (Scuderia Praha,) both in their 14th season.

However, the most experienced of all is Eric Prinoth, from Bolzano, Italy, the son of Ernest, who even tried his hand at Formula 1 in the Sixties. Erich is starting his 15th season and he is entered by the Ineco-MP Racing team.

From the veterans we move on to the rookies, all eight of them. In the Trofeo Pirelli Italy’s David Gadrì (team Rossocorsa), the Czech Dusan Palcr (Scuderia Praha – Dino&Co), the Belgian Florian Merckx (Kessel Racing) and the Russians Vadim Gitlin (Kessel Racing) and Nikita Kalin (Motor Piacenza). In the Coppa Shell the newcomers are the Italian Luca Gelli (Rossocorsa), Germany’s Thomas Loefflad (StileF Squadra Corse) and the Swiss Peter Goerke (Kessel Racing).
When it comes to age, the oldest by far is the British driver Rupert Martin, racing his Motor Piacenza 458 in the Coppa Shell. The youngest is the Argentinian Ezequiel Perez Companc, in the Trofeo Pirelli, also with the Motor Piacenza squad. 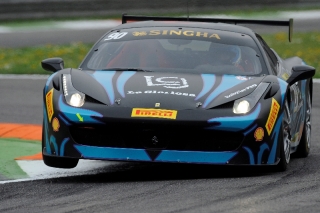 Maranello, 3 April –This weekend, Monza hosts the first round of this season’s Ferrari Challenge Europe, the longest running series of the famous one-make championship. There are no less than 44 cars – 27 in the Trofeo Pirelli and 17 in the Coppa Shell – entered for the races at the history track in the Lombardy region of Italy. There is bound to be plenty of the usual wheel to wheel action which has always characterized these races.

The FIA approved championship first took place in 1993 and is split between the Trofeo Pirelli with subcategories for Pro and Am drivers and the Coppa Shell, which includes a special Coppa Gentlemen for the over 55s. There are two races per category run over Saturday and Sunday. The races are short and spectacular and tactics have to make room for instinct, because 30 minutes is not really long enough for a convoluted strategy. There are seven rounds, all on really interesting tracks: following on Monza comes Mugello, then Brno, Portimao, Silverstone, Istanbul, before the Finali Mondiali in December in Abu Dhabi.

The North American and Asia-Pacific Ferrari Challenge series have already got underway for this year and they too end up in Abu Dhabi from 3 to 6 December. On that Saturday, once the individual titles for the three series have been decided, all the top competitors battle it out in a race to see who takes the title of World Champion.

This year, all the series run the 458 Challenge Evo, a car fitted with a new aerodynamic kit which boosts performance. Worthy of note is the rear wing, which is based on the one used in GT races and gives the cars much greater corner speed, promising even more excitement in the championships.