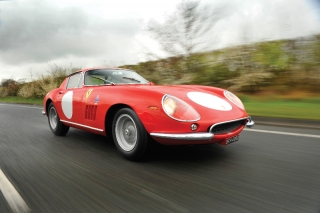 MONACO (May 11, 2014) – Boasting a sale total of €41,355,430 and with an incredible 93 percent of all lots sold, RM Auctions, the world’s largest collector car auction house for investment-quality automobiles, has once again set the collector car market on fire with an incredible performance in Monaco this weekend. Taking place alongside the Grand Prix Historique de Monaco, the sale saw records tumble as an international audience of bidders scrambled to secure some of the finest historic sports and racing cars ever offered at auction.

With a packed auction room and strong bidding via both telephone and the Internet, the attending audience was treated to an electric atmosphere which lasted through to the final of the 90 lots offered. The top selling car of the night was the simply stunning, and ultra rare 1966 Ferrari 275 GTB/C with coachwork by Scaglietti. Chassis 09067 is the ninth of only twelve such cars produced and perhaps the most original example of its kind, therefore presenting a very rare opportunity indeed. The hammer finally fell at a record-breaking €5,712,000, making it comfortably the most valuable fixed-head Ferrari 275 ever sold at auction. In an evening which once again saw the Ferrari marque dominate and secure six of the top ten prices paid, it was the gorgeous 1959 Ferrari 250 GT Pininfarina Series I Cabriolet, chassis 1181 GT, that generated the second highest bid of the evening, securing €4,704,000 to become the most valuable of its model ever sold at auction. Rounding off the top three sellers was the 1967 Ferrari 330 GTS, chassis 10719, one of ninety-nine built and a multiple concours winner, which found a new home for €2,128,000.

Max Girardo, Managing Director of RM Auctions, Europe, says: “It’s not often I’m lost for words, but I am simply stunned by what we have achieved tonight in Monaco. From a results perspective, this has been our biggest ever European sale and the 93 percent sell through figure is testament to the diversity and depth of quality that we had on offer. The atmosphere and energy was incredible right through to the final lot and it’s a particular delight that we have attracted so many enthusiastic new bidders from all around the world.”

Perfectly matched to a sale taking place in Monaco alongside the Grand Prix Historique, the roster of cars on offer included a large number of sports-racing and single-seater grand prix cars. Among the feature lots was the immaculate, race-ready 1966 Brabham-Repco BT20 Formula One car, a significant racer which had been victorious at the 1967 Monaco Grand Prix in the hands of Denny Hulme during his championship-winning year. Boasting that kind of provenance, it was particularly satisfying to see the car achieve €1,092,000, a stunning sum which smashed its pre-sale high estimate of €720,000. The Brabham wasn’t the only lot on offer to have a particularly strong relationship with the principality, as RM also proudly offered the 1958 Riva Tritone also known as ‘Via’. This super-stylish and powerful boat was owned from new by H.S.H. Prince Rainier lll of Monaco and his wife, Princess Grace, and is therefore an important piece of cultural history in the principality. Wonderfully restored and totally stunning, the boat secured €403,200.

The top ten sellers of night were:

LONDON (April 3, 2014) – RM Auctions, the world’s largest collector car auction house for investment-quality automobiles, continues to attract incredible, historically significant cars to its forthcoming Monaco sale at Le Sporting on 10May. Staged during the Grand Prix de Monaco Historique weekend, the single-day sale will present a superb roster of more than 80 handpicked, blue-chip automobiles, including seven vehicles with pre-sale estimates in excess of €1.000.000.  World-class Ferraris are never far from any RM sale and the upcoming Monaco event is no exception, featuring no less than 16 examples from the famed Italian marque. Amongst recent highlights is a 1966 Ferrari 275 GTB/C with coachwork by Scaglietti. Chassis 09067 is the ninth of only twelve produced, and is arguably the finest and most original example of its kind as it boasts fully matching numbers and Ferrari Classiche certification. Unlike many 275 GTB/Cs, 09067 was not sold to a race team but rather delivered new to a private owner in Milan who registered it for road use. The car didn’t see track action until 1969, when its third owner competed in the Colle San Eusebio Hill Climb. It then passed onto its fourth owner in 1973, spending the next 22 years in the Netherlands. Most recently, the car has participated in various tours and rallies including the Tour Auto, but its infrequent period race history makes it very unusual and undoubtedly contributes to it being one of the most original and desirable 275 GTB/Cs in existence (Estimate: €4.300.000–€5.000.000). RM is also delighted to announce that it will offer a very rare 1959 Ferrari 250 GT Pinin Farina Cabriolet Series I, chassis 1181 GT,in Monaco. It is the 36th of only 40 examples built as well as being the final factory covered-headlamp version. Connoisseurs will appreciate that 1181 GT is built on the later and much superior 508D chassis and the fact that it is both matching numbers and fully Ferrari Classiche certified. Completed on 12 March 1959, chassis 1181 GT was shipped to New York City for display on Ferrari’s stand at the third International Automobile Show prior to being delivered to Luigi Chinetti Jr. It was then sold in 1960 to preferred Ferrari customer William McKelvy, the famed principal of the Scuderia Bear team before passing onto Bob Grossman, the well-known New York-based dealer, Briggs Cunningham team driver, and two-time SCCA champion a year later. The Cabriolet was subsequently owned by a number of well-known collectors in North America before spending the last three years residing in the UK (Estimate: €4.000.0000–€5.000.000). Max Girardo, Managing Director of RM Auctions, Europe, says: “Once again, we are proving to be the auction house of choice when it comes to selling historically significant Ferraris. We have an unrivalled reputation in the global market place and our Monaco sale never disappoints, with more than 80 fabulous pre- and post-war sports, touring and racing cars representing 37 different marques”. Another significant entry sure to attract collectors of the Maranello marque is the matching-numbers 1967 Ferrari 330 GTS, chassis 10719. One of ninety-nine built, it was originally shipped to Luigi Chinetti Motors in Greenwich, Connecticut in early 1968, passing through the hands of various respected collectors in North America over the following decade. In 2006 the car benefited from a thorough restoration by Rudi Koniczek & Company, which brought it up to the most remarkably perfect condition in every respect. A testament to the outstanding quality of its restoration, 10719, presented in stunning Blu Scuro with a Claret and black leather interior and black cloth top, was shown at the 2011 Concorso Italiano in Monterey, California where it was awarded the Ferrari Club of America Pacific Region Vintage Concours Award and received Best of Show honours (Estimate: €1.500.0000–€1.800.000). Not all rare Ferraris herald from the 1960s and the marque’s more recent design will be represented in Monaco by a 2006 Ferrari 575 GTZ with unique coachwork by Zagato. This immensely rare care is the brainchild of a Japanese collector, Yushiyuki Hayashi who commissioned Zagato to create a unique design using Ferrari’s 575 Maranello Berlinetta as a platform, taking his inspiration from the Zagato-bodied TdF models. It is surely one of the most recognisable coachbuilt creations of the early 21st century as Zagato produced only six examples, all of which carry unique body features specified by their first owners, leaving no two cars exactly alike. The 575 GTZ on offer is one of the most fascinating Ferrari cars of recent times, and presents a very rare opportunity for collectors seeking unique features and exclusivity (Estimate: €880.000–€1.050.000). Of course, Ferrari isn’t the only Italian marque to have produced some of the world’s greatest sports and racing cars. Maserati was more than a match for the Maranello marque on both road and track during the 1950s and 1960s. Monaco will see RM offer the 1956 Maserati 450S Prototype, a truly historic racing car which lived two lives, originally as a six-cylinder Works racer, and later as the first incarnation of the eight-cylinder 450S. With beautiful yet purposeful coachwork by Fantuzzi, the example on offer competed as the Works entry at the 1956 Mille Miglia, driven by the legendary pairing of Sir Stirling Moss and Denis Jenkinson. After the Mille Miglia, the car returned to the factory where it became the prototype for the new eight-cylinder 450S. Once acquired by the current owner, this historic Maserati was painstakingly restored in 1987 to its prototype specification, with significant advice and detailed consultation with the Factory. The Monaco sale represents the first time the car has been offered for sale in 33 years, presenting a very exclusive ownership opportunity (Estimate: €4.000.000–€5.500.000). For further information on the upcoming Monaco auction, or to view a full list of entries and the complete digital catalogue, please visit www.rmauctions.com or call + 44 (0) 20 7851 7070. Lot List

About RM Auctions RM Auctions is the world’s largest auction house for investment-quality automobiles. With over three decades of experience in the collector car industry, RM’s vertically integrated range of services, from restoration to private treaty sales, auctions, estate planning, and financial services, coupled with an expert team of car specialists and an international footprint, provide an unsurpassed level of service to the global collector car market. RM proudly holds six of the top ten all-time records for the most expensive motor cars sold at auction, and RM’s restoration division has achieved unprecedented accolades, earning Best of Show honours at the world’s top concours events. For further information, please visit rmauctions.com, find us on Facebook, or follow us on Twitter @rmauctions.