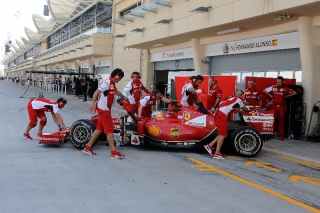 Once again, Fernando Alonso took to the Sakhir track at the wheel of the F14 T for the second and final day of this in-season test at the Bahraini circuit.

On the job list for today was a series of set-up tests, carried out based on data from yesterday. Unfortunately, testing had to be called to a halt when the chassis was found to be damaged.

After the necessary checks were made, the team decided to bring the test to a premature end as a precautionary measure.

The next time the cars will be on track will be Friday 18 April in free practice for the Chinese Grand Prix. 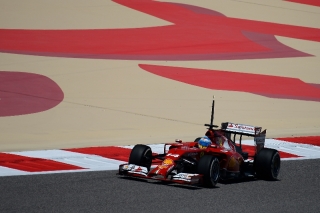 Fernando Alonso was back behind the wheel of the F14 T at the Sakhir circuit today at the start of the first of four in-season tests, reintroduced this year after a two year break.

In the morning, the team concentrated on fine tuning various electronic configurations and on taking aerodynamic measurements with constant speed runs down the main straight. In the afternoon, work was carried out in short runs, lapping to evaluate different set-up choices.

Alonso will again be on track tomorrow, as Scuderia Ferrari tackles the second and final day of this test.

Alonso back on track 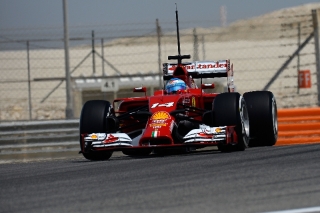 Sakhir, 8 April – This morning at Bahrain’s Sakhir circuit, the fourth Fomula 1 test of the year got underway, marking the return of in-season testing. Scuderia Ferrari is taking part with Fernando Alonso looking after the driving duties, having stayed working with the team since last Sunday’s Grand Prix.

He spent yesterday with the engineers, going over the F14 T’s development programme for this session in the smallest detail. It’s hotter than last week, with not too much wind in the desert location.

Before the lunch break, Alonso had done 31 laps on Medium tyres, with a best time of 1.37.375. The Scuderia started off checking some aero measurements before moving on to set-up work on the mechanical front, aimed at improving the balance of the car, especially at the entry and exit of the corners.

Two days of testing with Alonso in Bahrain 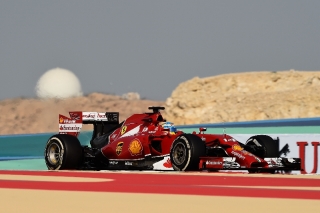 Sakhir, 7 April – Scuderia Ferrari, just like the other ten Formula 1 teams, hasn’t left Bahrain after yesterday’s race as tomorrow the F14 T will be running again in the fourth test session of the year.

Previous test sessions were held before the start of the championship on the Spanish track of Jerez de la Frontera (one) and here in Sakhir (two), whilst tomorrow’s sesion kick starts the comeback of in-season testing.

The two-day test will be the first of four that will be organized throughout the course of the season, a reintroduction strongly wanted by Ferrari which has always believed that no computer simulation can be more effective than the response gained on track.

Driving for Scuderia Ferrari will be Fernando Alonso, who will try to help the team make the much needed improvements that Stefano Domenicali has strongly requested. Fernando will face a particularly intense programme, with work focused on adressing certain areas of weakness of the car while continuing to develop the stronger points that have been demonstrated so far.