Paris, Grand Palais: Ready for the Off! 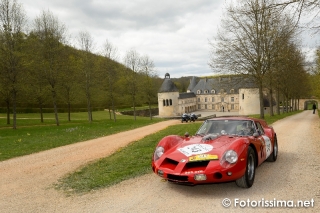 All the cars entered for the 23rd Tour Auto Optic 2ooo were again on display under the majestic dome of the Grand Palais, and a large crowd of Parisians turned up to have a look. The 10 000 spectators were able to admire the beauty of the impeccably-prepared 237 cars present with large contingents from Mini, BMW and Ferrari including the famous one-off Breadvan, as well as  other makes that raced in the Tour de France Automobile between 1951 and 1973.The first day, which began at 10h00 this morning, was devoted to scrutineering and administrative checks for the entrants: it was also the theatre of various press conferences. The Tour’s faithful partner Optic 2ooo was the first to welcome the journalists. Motor car partner BMW i then took up the running to present the i8, which will cover the whole Tour Auto itinerary giving its first real live demonstration. The glass brand and Alain Figaret – the official clothing supplier – also presented the 2013 winners in the various categories with their prizes: the official Tour Auto glasses and the Trophy jacket. Patrick Peter described the 2013 route of the event he has been organising since 1992. Hublot, the official time keeper, unveiled the Classic Fusion Chrono Tour Auto 2014 watch, a limited edition of only 100 pieces. Finally, Ferrari closed the festivities with the first presentation in France of the California T.The first day in the Grand Palais ended with the traditional Tour Auto 2ooo Soirée. A not-to-be missed gathering during which entrants, partners and personalities rubbed shoulders. This year Olivier Panis, Eric Comas, Gérard Larrousse, Jürgen Barth, Armin Schwarz, Hugues Aufray, Jean-Luc Lahaye, Gaspard Ulliel, Michel Rostang, Gérard Holtz, Grégory Galiffi, Arséne Jiroyan, Alexande Brasseur and company were all present.

Tomorrow morning Tuesday 8th April all the drivers will leave the magnificent setting of the Grand Palais at 06h00 direction the Château Vaux Le-Vicomte where the official start of the rally will be given at 07h30. The day’s programme includes a special stage on closed roads and another on the Dijon Prénois circuit for the whole field after which the entrants will head for the first leg town (Dijon). 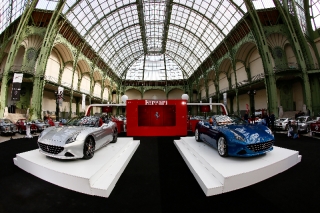 Paris, 7th April 2014 – What better setting than the Grand Palais in Paris for the California T, Ferrari’s latest creation, to make its debut on French soil? The new Grand Tourer from Maranello was a magnet for the over 200 journalists who attended the premiere this afternoon on the opening day of the Tour Auto Optic 2000 rally.

The California T was to be the star attraction at a gala cocktail in the evening for over four hundred guests who thus had the opportunity see this superb example of elegance, sportiness, versatility and exclusivity for themselves.

After this traditional rendez vous in the Grand Palais, the first leg of the Tour Auto will get under way on Tuesday morning for a five-day rally (over 4 circuits and 9 stages on closed roads), with the journey coming to an end in Marseille on Saturday the 12th of April. Ferrari will be posting regular updates on the event on its web sites and social media pages.