XX – F1 Clienti – Conclusion of the two-days of the Mugello 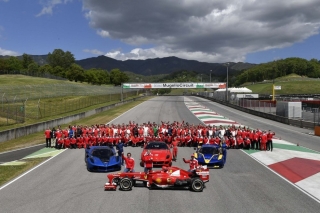 Scarperia, 27 April 2016 – Second and final day of free trials for the F1 Clienti and the XX Programmes on the Mugello track. Thirty-four cars of the XX Programmes flashed along the legendary “Arrabbiate” corners: one FXX, the earliest ancestor of this very special type of car, four 599XX, eleven 599XX Evo, and 18 FXX K, the latest incarnation among the test cars whose drivers are also test drivers for the Maranello brand. The car is powered by 1,050 HP, thanks to its 12 cylinder, 6-litre engine and a hybrid system derived from Formula 1. A very well prepared group of instructors, in addition to the engineers, supported the customers, advised them, and did with them the telemetry readings.

F1 Clienti. Once again, during the second day of free practice on the Tuscan track, the cars of the XX Programmes alternated with the F1 Clienti cars; the latter made history in the category and Ferrari makes them available for sale to a very select group. Thirteen cars from among the most successful single-seaters in the history of Ferrari and of the entire Formula 1 could be seen on the Italian circuit: the F2001, F2002, and F2003-GA for example, which, thanks to Michael Schumacher, but also Rubens Barrichello, still occupy a special place in the heart of fans. Once again, Olivier Beretta and Marc Gené, test driver for Scuderia Ferrari, were there to help and advise the customers drivers, to enable them to fully exploit the available potential of the cars.

Dinner in spectacular surroundings. The gala dinner offered in honour of the customers was held Tuesday evening in the unusual surroundings of the Serra Torrigiani [greenhouses], in Florence. The next event of the F1 Clienti and XX Programmes will take place in less than a month in Vallelunga, just outside Rome. 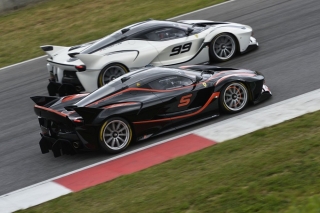 Scarperia, 26 April 2016 – The first of two days of free practice for the Ferrari XX Programmes and F1 Clienti special drivers were held on Tuesday at the Mugello Circuit. Eighteen of the new FXX K models were on show in the Tuscan hills. There were also four 599XXs and 11 599XX EVOs as well as the FXX, the forerunner car of this exclusive Prancing Horse project.

Formula 1. The 37 cars of the XX Programmes were also accompanied by 13 of the most successful Formula 1 cars in the history of Ferrari. There was a pair of F2001s, and one F2002, a record holder along with the F2004. Then there was an F2003-GA, an F2005 and a 248 F1 from 2006, the last car driven by the great Michael Schumacher in his Scuderia Ferrari career. Finally, there were also the cars that delivered the last two world championship titles to Maranello: a F2007 driven by Kimi Raikkonen and four F2008s crewed by the Finn and Felipe Massa. They were rounded off by an F10 and F150° Italia of Fernando Alonso.

Programme. The first day included eight free practice sessions, with another eight planned for the final day on Wednesday. However, Corse Clienti will stay at Mugello, where the weekend sees the second round of the Ferrari Challenge Europe season, the last Italian stage, with 41 Ferrari 458 Challenge EVOs due to compete. Two races will take place as usual on both Saturday and Sunday.