Ferrari Challenge Europe – Grossmann and Smeeth win again, 3 out of 4 for Loefflad 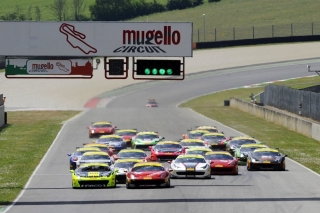 Scarperia, 1 May 2016 – Thomas Loefflad, Bjorn Grossmann and Sam Smeeth dominated the second day of Round 2 of the Ferrari Challenge Europe in the beautiful setting of Mugello.

Coppa Shell. The Coppa Shell opened the programme again on Sunday, rewarding the fans with a thrilling show. At the start championship leader Thomas Loefflad (StileF Squadra Corse) overtook poleman Tani Hanna (Motor Service), while Erich Prinoth slipped past two cars on the outside at turn 1 to begin a wonderful comeback after a difficult qualifying session. The Safety Car came on the track a little later when Murat Ruhi Cuhadaroglu was involved in a frightening accident. Luckily the 458 Challenge EVO is a very safe car and so the Turkish Kessel Racing driver escaped with just a scare. The race resumed 16 minutes from the end with Loefflad opening the gap on Hanna at the restart. Prinoth overtook Fons Scheltema (Kessel Racing) and then Jean-Claude Saada (Rossocorsa). Then three laps later Leonardo Baccarelli (CDP) had to make way for the Ineco-MP Racing driver who secured a podium finish. Behind him, Scheltema and Saada clashed with the Dutchman suffering a drive-through penalty. This was Loefflad’s third victory in four races in front of Hanna and Prinoth, the latter winner of the Gentlemen’s Cup. Corinna Gostner earned her second consecutive win in the Ladies Cup.

Trofeo Pirelli. In the afternoon Race-2 of the Trofeo Pirelli was quite a show right from the start. The leaders turned the first corner unscathed with Bjorn Grossmann (Octane 126) ahead of Philipp Baron and Marcello Puglisi (both Rossocorsa) while John Farano span on the track after a contact eith another car spreading panic among the group. Andrea Benenati hit a barrier to avoid the Canadian and had to retire. Grossmann opened a gap over the rivals lapping in 1:54:032 gradually pulling away from championship leader Baron who in turn kept Puglisi well under control. The trio finished in that order while Alessandro Vezzoni (Rossocorsa Pellin-Racing) came fourth, his best result of the season.

Pirelli Am. Sam Smeeth again totally dominated the Trofeo Pirelli Am. No one threatened the Stratstone Ferrari team driver, while Martin Nelson (Scuderia Autoropa) came second after fighting with Andreas Segler (StileF Squadra Corse) for a few laps. Then the German made a mistake and ended up at the back, clearing the way first for Peter Knoflach (Kessel Racing) and then Tommaso Rocca (Rossocorsa) for the last podium step. The Italian handled his 458 Challenge EVO well over the final laps, holding off John Farano who mounted a great comeback after his problem at the start. 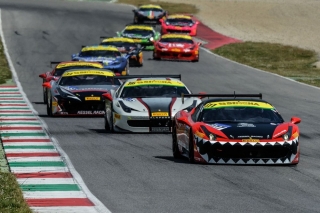 Scarperia, 30 April 2016 – Erich Prinoth, Bjorn Grossmann and Sam Smeeth dominated the first day of the Round 2 of the Ferrari Challenge Europe in the beautiful setting of Mugello.

Coppa Shell. The Coppa Shell kicked off Saturday’s programme with a number of exciting duels. Erich Prinoth kept the lead at the start in front of Thomas Loefflad (StileF Squadra Corse) while Tani Hanna (Motor Service) took third ahead of Fons Scheltema (Kessel Racing), Jean-Claude Saada (Rossocorsa) and Eric Cheung (Motor Service). Loefflad attempted to overtake the Ineco MP-Racing team driver and recorded the fastest lap but the Italian countered his attacks, beating the German who had an eye on the championship notching up 15 important points to consolidate his lead in the standings. Third place saw a big fight between Hanna and Scheltema who managed to overtake on lap 7. Soon the Lebanese Motor Service driver also found himself under pressure from Saada. The US driver attacked the first corner and clipped Hanna, putting him out of the race. In the closing laps Saada caught up with Scheltema but failed to pull past him. Cheung took fifth in his 100th race in the 458 Challenge. Prinoth also won the Gentlemen’s Cup while the victory in the Ladies Cup went to Corinna Gostner (Ineco MP-Racing).

Trofeo Pirelli. Race-1 of the Trofeo Pirelli in the afternoon was quite a show. At the start Philipp Baron (Rossocorsa) promptly jumped ahead of his teammate Marcello Puglisi to slip into the first corner behind Bjorn Grossmann. The pair locked horns in the early laps although the Octane 126 driver put in the fastest lap to extend his lead by a few metres. Lap 10 provided an unexpected twist, with Baron suffering technical trouble that compromised the performance of his 458 Challenge EVO forcing him to give way to Puglisi. David Gostner, a little behind, realised that a podium finish was possible. The Ineco-MP Racing driver pushed and caught Baron but lost time running out into the gravel. He managed to overtake on the final lap but with the 4th place the Austrian retained his championship lead. Alessandro Vezzoni (Rossocorsa Pellin-Racing) and Jan Danis were involved in a fight for 5th which led to an accident with the Slovak Scuderia Praha coming off worst.

Pirelli Am. The Trofeo Pirelli Am race was more straightforward. Sam Smeeth (Stratstone Ferrari) set off quickest from pole to extend his lead over John Farano, while Martin Nelson (Scuderia Autoropa) and Giuseppe Ramelli (Rossocorsa-Pellin Racing) came into contact and put themselves out of the running. Tommaso Rocca (Rossocorsa) took third. The races will be held at the same times on Sunday, with the Coppa Shell at 12:35 pm and the Trofeo Pirelli at 3:20 pm. 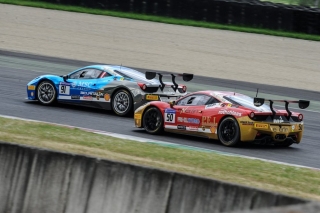 Scarperia, 29 April – Claudio Schiavoni tells us about the Mugello Circuit, a wonderful track owned by Ferrari. The track features some of the most iconic turns in motorsport such as the San Donato, the Bucine and the Arrabbiatas and it is here that drivers will seek precious championship points in this weekend’s two Ferrari Challenge Europe’s races. Schiavoni is one of the season’s rookie, driving the Scuderia Niki’s 458 Challenge EVO. However he already drove on this circuit at the beginning of the week on the incredible FXX K, the latest car of the exclusive Ferrari XX Programmes. 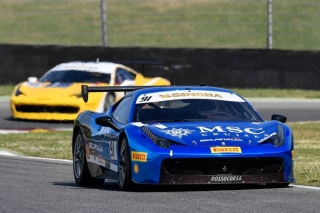 Scarperia, 29 April 2016 – The Ferrari Challenge Europe is back on track at Mugello for the second and final Italian round. Forty-one cars will compete in three classes: Trofeo Pirelli, Pirelli Am and Coppa Shell.

Trofeo Pirelli. In the first of the two Pirelli classes the favourite is Austria’s Philipp Baron, winner of one of the two races at Monza. The Rossocorsa team driver’s toughest challengers will be David Gostner (Ineco MP Racing) and European champion Bjorn Grossmann (Octane 126), who suffered a puncture at Monza but is always very fast.

Pirelli Am. Sam Smeeth (Stratstone Ferrari) will lead the pack in the Pirelli Am. The British driver won at Monza along with Martin Nelson (Scuderia Autoropa). Tommaso Rocca (Rossocorsa) and Andreas Segler (StileF Racing Team) are also in with a chance. As usual there are two Trofeo Pirelli races on the programme, both starting at 12.30 pm. 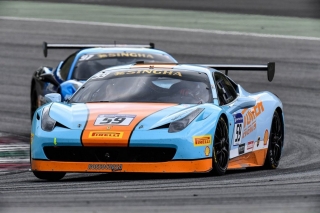 Scarperia, 29 April 2016 – The third and fourth round of the Ferrari Challenge Europe’s Coppa Shell division takes place this Saturday and Sunday. Starting with the favourites, we have German Thomas Loefflad who dominated both races at the Autodromo Nazionale di Monza. His closest rivals is the experienced Fons Scheltema, who also leads the Gentlemen’s Cup.

100 races. The Mugello weekend also marks Eric Cheung’s 100th race at the wheel of the 458 Challenge. The Canadian driver, who just notched up a win in the APAC series in Abu Dhabi, hopes to celebrate the landmark at Mugello with another victory.

Ladies Cup. It’s all to play for in the Ladies Cup, with Manuela Gostner topping the standings ahead of Deborah Mayer and Corinna Gostner. As always Mugello will be a complex encounter, where the best talents will shine.