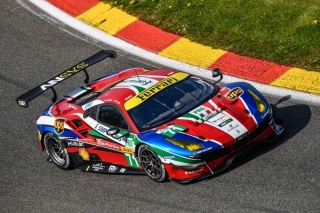 WEC – Bird, Rigon and the 488 GTE win at Spa-Francorchamps 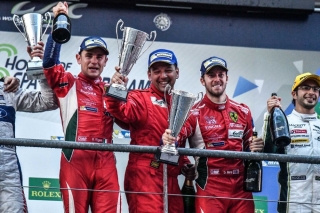 Francorchamps, 7 May 2016 – Second success in a row for the No. 71 AF Corse Ferrari 488 GTE of Sam Bird e Davide Rigon, winners of the 6 Hours of Spa-Francorchamps, second round of the World Endurance Championship (WEC), the last race before the 24 Hours of Le Mans scheduled for mid-June. Bad luck for car No. 51, of Gianmaria “Gimmi” Bruni and James Calado, that was stopped by a technical issue while leading with only ten minutes remaining in the race. It was a tricky afternoon also for the 458 Italia of François Perrodo, Emmanuel Collard and Rui Aguas, racing in the GTE-Am class. The car was penalised with two drive-throughs but still finished second.

GTE-Pro. In the GTE-Pro class the race kicked off with Bird in car no. 71 starting from pole and Bruni in no. 51 beside him. The Italian made a better start to take first place but Bird initially kept pace with Bruni. Then, partly because of the traffic, Sam went wide at Pouhon corner and lost a total of eight seconds. The first pit stop with driver change took place under Full Course Yellow, with all cars restricted to 80 km/h following a frightening but thankfully harmless accident for Aston Martin’s Nicki Thiim, while an episode at the second stop seemed to be the key of the race. Debris on the track again called for a Full Course Yellow and both cars returned for their pit stops. But while Calado handed over to Bruni under the yellow flag, Rigon swapped with Bird when the race was back under the green flag. As a result no. 71 found itself almost 30 seconds behind no. 51. Then, with only ten minutes remaining in the race, a technical issue hit the 51 car obliging James Calado to retire in the garage. Bird and Rigon won in front of the Ford of Franchitti-Priaulx-Tinknell and the Aston Martin of Rees-Adam-Stanaway.

GTE-Am. The only Ferrari in the GTE-Am class, the AF Corse No. 83 458 Italia of Emmanuel Collard, François Perrodo and Rui Aguas, had a difficult afternoon but secured an important second place for the championship. The winner was the Aston Martin of Lamy-Lauda-Dalla Lana but the drivers of car no. 83 received two drive-through penalties for exceeding track limits. Without those they would have been in with a chance of victory. The overall race was won by the Audi of Jarvis-Di Grassi-Duval. The next meeting is the most anticipated, the 24 Hours of Le Mans on 18-19 June.

FIA WEC Spa-Francorchamps in pictures by our correspondent Peter Grootswagers 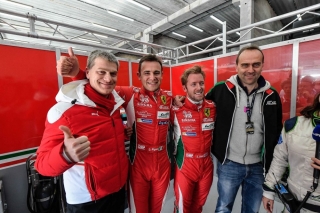 Francorchamps, 6 May – The Ferrari 488 GTE monopolised the front row in the GTE-Pro class in qualifying for the 6 Hours of Spa-Francorchamps, which starts on Saturday at 2.30 pm. The crew of car no. 71 AF Corse, Sam Bird and Davide Rigon, took a second consecutive pole, just over three tenths of a second ahead of teammates Gianmaria “Gimmi” Bruni and James Calado in car no. 51. The 458 Italia AF Corse of François Perrodo, Rui Aguas and Emmanuel Collard, came second in the GTE-Am class.

GTE-Am. The only Ferrari in the GTE-Am class, the 458 Italia AF Corse of Emmanuel Collard, François Perrodo and Rui Aguas, had a very positive session. Aguas and Perrodo took to the track with the Portuguese initially stopping the clock at 2:20:641, which he improved to 2:19:784 on his second lap. Meanwhile, Perrodo started with 2:22:547 before knocking a split second off that with 2:21:545 next time round. In the end the Ferrari no. 83 came second to the Aston Martin of Lamy-Lauda-Dalla Lana, but it will be a long race and the fight for first is wide open. 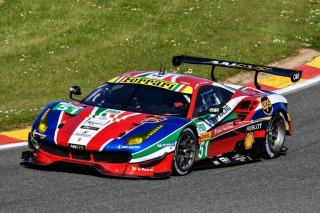 Spa, 5 May – The 6 Hours of Spa-Francorchamps will be held on Saturday; it is the second of the nine events that make up the World Endurance Championship (WEC); it is also the last race before the 24 Hours of Le Mans scheduled for mid-June. Ferrari will field three cars, all under the colours of the AF Corse team.

GET-Pro. The usual pair of 488 GTE will compete in the GTE class. Davide Rigon and Sam Bird, winners of the first race of the seasons at Silverstone will be in car number 71, while James Calado and Gianmaria “Gimmi” Bruni will alternate at the wheel of car number 51. These two cars started the season with a one-two finish, but there is reason to believe that the challenge will be much stiffer on the Ardennes track. At Silverstone, Porsche kept a very fast pace before pulling out, while Aston Martin, last year’s winner here, and Ford will certainly improve, as the American constructor is galvanised by its win in the Imsa race of Laguna Seca.

GET-Am. In GTE-Am class, Emmanuel Collard, François Perrodo, and Rui Aguas will attempt to duplicate their perfect race at Silverstone, although there is no shortage of competition in this class. If first place eludes the 458 Italia number 83, it will be important for the three drivers to climb the podium and score points, as championships are won also with consistent results. The race will be held on Saturday, with a 2:30 p.m. start and finish at nightfall at 8:30 p.m.

Previously. The Spa-Francorchamps circuit is very special to all drivers, teams and constructors. But Ferrari and the Ardennes track have a genuinely special relationship. It was at the 24 Hours of Spa on July 9 1932, in fact, that the Prancing Horse made its debut on Enzo Ferrari’s Alfa Romeos. The emblem inherited from Francesco Baracca brought instant good luck as the race was dominated by the Scuderia Ferrari’s 8C 2300 MMs. In fact, Antonio Brivio and Eugenio Siena were first across the line ahead of the car of their team-mates, Piero Taruffi and Guido d’Ippolito. In the intervening years, the Ferrari name and badge has taken the top step on the Belgian podium over eight times. The first actual Ferrari car to win at Spa was a 166 MM entered and driven by Luigi Chinetti who had Jean Lucas as his co-driver, in the 1949 24 Hours. The last Prancing Horse victory came as recently as 2015 courtesy of the AF Corse 458 Italia driven by Pasin Lathouras and Michele Rugolo who won the race valid for the International GT Open Championship.