Formula 1 returns to the Paul Ricard 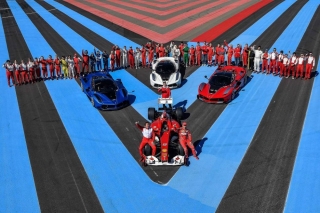 Le Castellet, 8 March 2017 – The rumble of Formula 1 engines was heard again on the Paul Ricard a year ahead of schedule. In 2018 the track will host the French Grand Prix, which hasn’t been held since 2009. But ahead of that the drivers of the F1 Clienti and XX Programmes provided an exceptional test run for the Paul Ricard with their first event of the season.

Legendary corner. The F1 cars taking to the track included a F399, the car that opened the victorious era dominated by Michael Schumacher. Ferrari didn’t take the drivers title that year after the German’s injury at Silverstone, but it did claim the Constructors’ Championship, always the prime target for Maranello. Besides the F399, 10 other Ferrari single-seaters provided thrills and excitement down the Mistral straight and round the legendary Signes corner. They included two F2002s, the car with which Schumacher won the championship at Magny-Cours in July, the F2007 of Kimi Raikkonen and the F150° Italia belonging to Fernando Alonso.

Almost 38,000 hp. The 40 Ferraris together totalled a record of almost 38,000 hp, which is more than will be present in 2018 for the Formula 1 Grand Prix. The 19 FXX Ks on track pack 1050 hp each, while the 599XXs have a total output of 5840 hp and the FXXs deliver 3200 hp. Eleven Formula 1 cars also provided around 9000 hp. The next two days of the F1 Clienti and XX Programmes tests is set for mid-April at Mugello, a circuit always popular among Ferrari customers. 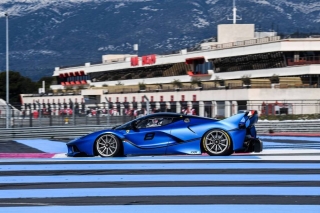 Le Castellet, 7 March 2017 – The first of two days of Ferrari tests at the Circuit Paul Ricard in Le Castellet, France, has concluded. The meeting was the first event of the F1 Clienti and XX Programmes season. Forty cars were involved, including 11 single-seaters and nearly 30 extraordinary cars like the FXX K, 599XX, 599XX EVO and FXX.

Eager to drive. The customers in France also included several Ferrari Challenge drivers who, waiting to take to the track with the new 488 produced for the one-make championship, donned their driving suits and helmets for a first run out after the winter break. Some of them also decided to take part in a kart race, just to keep in practice. The weather conditions were perfect and so the special XX Programmes customer testers like the F1 Clienti drivers had the full pleasure and excitement of hurtling around the track in their Ferraris. They enjoyed the assistance of two exceptional tutors, Marc Gené and Olivier Beretta, both with experience in Formula 1 and many victories in endurance competitions.

Perfect track. Everyone was impressed with the Circuit Paul Ricard, with its long Mistral straight and especially the famous high-speed Signes corner. This was also a dress rehearsal for the circuit’s staff ahead of July, when the Ferrari Challenge will stop in Le Castellet two years after the 2015 Ferrari Racing Days. Track activities continue tomorrow with another day of testing.