Kimi: “Thanks to the whole team” 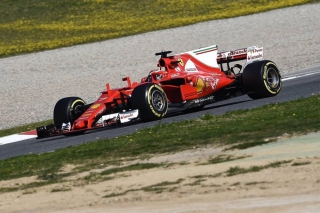 “There’s a good feeling but it’s too early for predictions”. A thought for John Surtees: “He had racing in his blood”

Montmelò, 10 March – “There’s a good feeling with this car and that’s the most important thing. We have been reliable for almost all of these days of testing and that is another good sign of the great work the team has done over the winter. We are starting from a stronger base than last year: but it’s really too early to say how fast the car is compared to the others. Perhaps even Melbourne won’t give a 100 per cent precise picture of the situation, because the first race is always a bit unusual. We might have to wait until China. Either way I’d like to thank everyone in the team, because they have always managed to step in and sort out all the small problems that testing is supposed to resolve.”

These are the words of Kimi Raikkonen, at the end of his second day’s work which wraps up this year’s winter testing at the Montmelò circuit. He put in 111 laps in his SF70H today, during a programme that included a race simulation. The attempt was interrupted at about 4pm by an electrical problem, when he was still about 15 laps from the “chequered flag”. Having been brought back to the pits, the Ferrari went out again with just under 20 minutes left of the day.

Having learned the news of the death of John Surtees, who won the 1964 Formula 1 world championship at the wheel of a Ferrari, Kimi wanted to remember him like this: “I met him a few times, he was very easy-going and it was very easy to get on with him. And you could tell that he had passion for racing in his blood. So this is sad news and my thoughts are with his family.” 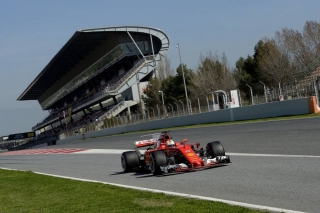 Vettel finishes his test runs with a race simulation

Montmelò, 9 March – Sebastian Vettel finished his winter testing today with a full grand prix simulation shared out between morning and afternoon, and a series of other tests that brought today’s total of laps completed to 156. In addition to the 168 laps he put in on Tuesday that makes a total of 1,508km for the German Scuderia Ferrari driver during this second week of testing.
Vettel said: “The important thing is that we have completed a lot of laps and, compared to the same time a year ago, we feel better prepared because of that. At this point lap times don’t mean anything: we followed our programme and made progress but there’s still room for improvement.”
The race simulation took place in two phases – using Soft, Super Soft and Ultrasoft tyres during the late morning before covering a race distance (66 laps) with two sets of Soft tyres and one set of Mediums in the afternoon.
Tomorrow it will be Kimi Raikkonen’s turn to take to the wheel of the SF70H for the fourth and final day of winter testing. Then preparations will begin back at base for the first race of the world championship at Melbourne. The cars will leave from Maranello next Thursday.