Ferrari for the Emilia region

Ferrari for the Emilia region 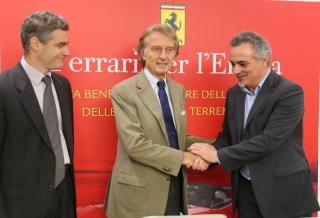 Maranello, 23 October –Today at Mirandola, a journey begun a little over a year ago came to an end, with Ferrari handing over funds raised at the auction held at the company’s Maranello headquarters, to the families of victims of the earthquake that hit the Emilia region of Italy in May 2012.

Thanks to the generosity of owners and fans of the Prancing Horse from around the world, over 1.9 million Euros was raised, now distributed to those families through ActionAid, a non-governmental organisation fully involved in initiatives aimed at the rebuilding of the area hit by the tremors, which Ferrari had wanted to be involved in order that there should be total transparency in the arrangements. Each directly related family member (partner, child, parent) of a victim – in total sixty seven people – will receive the sum of 28,000 Euros. The support of the Ordine degli Avvocati di Modena, the association of legal advocates, was also important, thanks to their pro bono work in handling the procedures relating to the distribution of sums to those who were not yet of legal age.

“I am happy that today it’s been possible to hand over real financial assistance to families of those who have lost what, in most cases, was its only means of support,” said President Luca di Montezemolo. “Ferrari has solid roots in this area which has seen it grow and I want to thank once again everyone who took part in the auction, which clearly demonstrated the solidarity of Ferrari people towards those who have suffered.

“I am proud and touched to be here in Mirandola,” added Montezemolo. “This tragedy in the Emilia region has demonstrated like never before that the workers and entrepreneurs are united. Those in this country who continue to classify them differently are making a mistake that goes against history. There is a need for unity of purpose and for people to work together and, when it comes to talk of growth, a topic which is much talked about, but about which little is done, the first thing that springs to mind is that this growth must be a sign of solidarity and must include everyone.”

The money was raised in just two weeks. The mainstay of the auction was the 599XX, sold for 1.4 million Euro to an American owner, Benjamin Sloss, who picked it up on 8 September 2012, at the Monza circuit, where Luca di Montezemolo and the Scuderia drivers handed over the keys to the car. Other major contributions came from England (80,000 Euros for an F2008 engine,) Malaysia (23,000 Euros for the nose of an F60) as well as the generosity of so many others, such as the 100,000 donated by a Russian customer.