Diving into the red 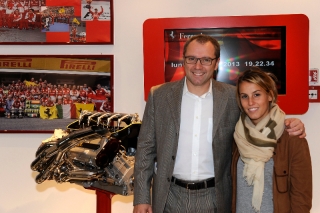 Maranello, 21 October – One after the other, they have written the story of diving, in Italy and the world, winning dozens of medals at the highest level of national and international competition. Tania and Giorgio Cagnotto, daughter and father and, at the same time, champion and trainer, took a break to visit the Ferrari factory in Maranello, where they met Stefano Domenicali, the Scuderia’s Team Principal.

“Honestly, I don’t know much about engines nor can I claim to be a fan,” said Tania with her usual candour, speaking to www.ferrari.com. “However, what I saw today in Maranello left me gobsmacked. Seeing how a factory like Ferrari operates was certainly a wonderful experience. The thing that impressed me the most? The great attention to detail which each individual applies to their job, the precision with which the people carry out each single movement: it’s a bit like when we have to pull off a dive, in that there is no margin for error….