Ferrari Racing Days – Close to 600 Ferraris and over 5,000 owners and fans coloured Fuji Speedway in red 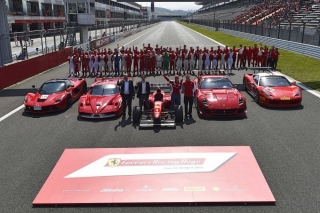 Tokyo, 26 April 2015 – In a delightful weather of spring at Fuji Speedway, the final day of Ferrari Racing Days at Fuji was held amidst enthusiastic Ferrari owners and fans excited to enjoy the world of Ferrari.

The grandstand was filled with Ferrari tifosis thrilled to join the event, celebrating the fantastic Ferrari Racing Days Fuji event with some incredible on-track displays from the Corse Clienti team while hundreds of Ferrari vehicles from all across the country painted the venue in red. Owners, their families and friends witnessed some of the most precious models of the Prancing Horse history, representing a truly unique characteristic of Japan with strong passion for the marque.

Ferrari Challenge Trofeo Pirelli Asia Pacific series competed on the full Grand Prix circuit in the second round following the fierce battle of Race-1 the day before. Also, peak of their motorsports passion was hit when F1 Clienti demonstrated the high speed laps with exhilarating sound of the F1 vehicles. Exquisite driving performance entertained the fans making it definitely one of the most memorable experience of the day.

Other on track activities such as tyre-shredding demonstration run of exclusive FXX and 599XX by XX Programme, as well as an amazing Supercar parade headed by the latest limited series LaFerraris added even more excitement to the event.

This year, “Make A Wish of Japan” joined the event where many Ferrari customers showed goodwill and made a great contribution over the weekend to support the organisation. “Make A Wish of Japan” is a foundation that supports children who are diagnosed with critical medical conditions to grant their wishes in the hope of changing their lives.

Ferrari Japan Managing Director, Reno De Paoli commented: “We are delighted to be back at Fuji Speedway this year with all Ferrari owners and fans. We had an amazing collection of Ferraris this weekend including LaFerraris through on and off track activities, which demonstrated our customers really do appreciate the true value of the Ferrari marque. We look forward to providing more opportunities to share our passion of Ferrari with our customers and the growing number of fans in Japan.” 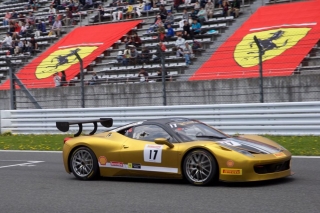 Tokyo, 25 April 2015 – The second round of the Ferrari Challenge Asia Pacific ended today at Fuji Speedway in Japan under glorious weather conditions. It was another thrilling day with lots of blistering wheel-to-wheel matches and drama on track. Race-2 saw the Challenge drivers put on a true racing spectacle on the fantastic track where the Formula 1 Japan Grand Prix once took place, amidst a grandstand full of fans enthusiastically watching the intense race.

Just like the first day, the action on track was fierce and fearless. In the Trofeo Pirelli classification, a hard fought battle between Renaldi Hutasoit from Indonesia and David Tjiptobiantoro, also from Indonesia, saw them swop places on the track several times. Hutasoit, winner of Race 1, eventually won the race with a time of 35’22.890, only 1”039 seconds ahead of fellow compatriot. In third position was Angelo Negro from Italy.

In the Pirelli AM classification, Lebanese Tani Hanna brought home the victory for the first time this season and finished in fourth position overall. Wei Xu from China claimed his second place win with Kuninari Mori from Japan finishing in third place. Hanna also won the Coppa Gentlemen classification.

The Coppa Shell category, the race was dominated by a fiery battle between Xin Jin and Huilin Han. Remarkably, Jin from China recovered from a spin to still take the victory with the race time of 36’11.738 as he showed bold overtaking moves ahead of his compatriot Han who closely came in second. Yanbing Xin, also from China, ultimately came home third.

The next round of the Ferrari Challenge Asia Pacific Trofeo Pirelli will take place in Shanghai, China on 23 – 24 May 2015, as part of another exciting edition of the Ferrari Racing Days. 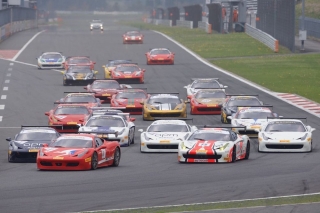 Tokyo, 25th April 2015 – The curtain came up on the long-awaited Ferrari Racing Days Fuji 2015 at Fuji Speedway today at the foot of the beautifully sunlit Mount Fuji.

The first day of the event started with the special rally ROAD to FUJI where Ferrari owners from every Ferrari official dealer network across the country drove to Fuji from as far as Fukuoka, Hiroshima, Osaka, Nagoya and Tokyo. An array of Ferraris have enjoyed the long drive cross the island and gathered at Fuji Speedway warmly welcomed by the crowd of Ferrari enthusiasts who have arrived at the circuit since early morning to join the event.

The first day of the second round of 2015 season’s Ferrari Challenge Asia Pacific Trofeo Pirelli got under way in style today with 24 cars and drivers from 11 different nations hitting the track The racing event was viewed by crowds of keen Ferrari fans, who were delighted and excited by the fast pace set by the drivers.

In the Trofeo Pirelli AM classification, Yasuyuki Uchida from Japan took the top spot on the podium followed by Alexander West from Sweden who came in a close second place and Eric Cheung from Canada in the third place. Yasuyuki Uchida also won the Coppa Gentlemen.

For the gentlemen drivers in the Coppa Shell, race 1 saw an exciting battle of skillful maneuvering. Xin Jin from China took the chequered ahead of Liang Wang from China and Vincent Wong from Hong Kong.

Throughout the day visitors on-site were treated to an unforgettable experience as they took in on-track activities including demonstration runs by the F1 Clienti, and the XX Programmes cars, FXX and 599XX, sports and enjoy drives, with one of the stand out moments when the Ferrari F1 cars took to the track. Off-track, visitors were treated to a rare display of the full range of Ferrari including the new Ferrari California T, F12berlinetta and FF fully dressed up in Ferrari Tailor Made specification.

In the evening, more than 300 guests of Ferrari owners, their families and friends, as well as Ferrari partners were hosted to the gala dinner. Guests enjoyed various entertainment and performances in the setting of red shades reflecting the world of Ferrari.

The final day of Ferrari Racing Days Fuji will kick off at Fuji Speedway with gates opening to the public from 7:00am tomorrow. 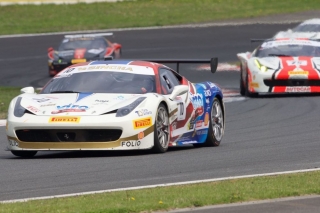 Tokyo, 25th April 2015 – The second round of the Ferrari Challenge Asia Pacific got underway today at Fuji International Speedway with 24 cars and drivers from 11 nationalities pitting against each other on the 4.563 kilometre track to see who could come up tops. A total of 13 cars are entered for the Trofeo Pirelli and Trofeo Pirelli AM classifications, with 11 competing for Coppa Shell. There’s also the Coppa Gentlemen for over-55 drivers.

Race-1 presented a wave of action as there were 2 safety car periods. There were lots of bumper to bumper action with interesting overtaking maneuvers and fierce battles. Steve Wyatt from Australia lead the Trofeo Pirelli class standings with 46 points after Round 1 in Sepang and took pole position after the morning qualifying race. However, it was Indonesian Renaldi Hutasoit’s day today as he came in first after a very tight race with his fellow compatriot David Tjiptobiantoro. Hutasoit also recorded a fastest lap of the race in 1’44”859 on his way to the win. Tjiptobiantoro finished a very close second, 0.24 seconds behind Hutasoit. Third place finisher was Singapore’s Ringo Chong, who tried to close in on the front runners throughout the race. Hutasoit dedicated his win to his fantastic team who supported him throughout his race.

The Trofeo Pirelli AM race was dominated by a fiery battle between Yasuyuki Uchinda from Japan and Alexander West from Sweden. West made several valiant but fruitless attempts to get past his rival. Eric Cheung, on the other hand, clawed his way back skillfully from 11th on the grid to 5th overall, earning himself the third step on the podium in his category. Uchida also won the Coppa Gentlemen.

The drivers from Coppa Shell gave a brilliant showcase of determination and racing. Xin Jin from China aggressively maintained his leading position against Liang Wang, also from China. Following closely behind were Hong Kong’s Vincent Wong and Eric Cheng from Singapore, battling for the top three places. But as the final laps were completed, Jin successfully defended his position, finishing first in his class with Wang and Wong in second and third positions respectively. The drivers will race again tomorrow for Race 2, which is scheduled at 1:30PM local time (6.30 CET).

Ferrari Challenge is one of the only competitive races and also one of the most popular one-make series in the world, where over 2,400 drivers have raced from over 40 different countries since 1993. The Asia Pacific region has joined the race since 2011 and this is the 5th sporting season in 2015. 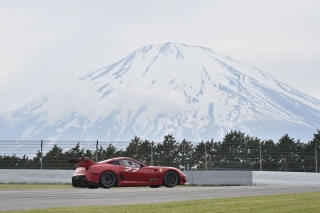 Tokyo, 24 April 2015 – With great anticipation, the Prancing Horse marque will make its return to the Fuji Speedway at the Ferrari Racing Days Fuji 2015.

Ferrari Racing Days is one of the biggest events organised by Ferrari Japan every year where an impressive number of Ferraris are expected to arrive with Ferrari owners and tifosi together to join the world and the atmosphere of Ferrari.

Highlights of the event will be some incredible on-track displays of F1, FXX and 599XX from the F1 Clienti and XX Programmes, organised by Corse Clienti, the department that coordinates all the sporting activity involving Ferrari owners. The event will also feature Supercar drives including LaFerraris, the iconic model of the Prancing Horse various track sessions such as the Sports Drive, Excite Drive and Enjoy Drive, as well as special Hot Lap experience with a professional driver to feel the amazing power of the Ferrari range.

Ferrari Racing Days at Fuji 2015 will also host the second round of the world’s popular one-make race series, the Ferrari Challenge Trofeo Pirelli Asia Pacific, following the successful first round held in Sepang last month where all drivers demonstrated thrilling races in the scorching hot weather with two Japanese drivers claiming their spots on the podium. Steve Wyatt from Australia is currently at the top of the table for the Trofeo Pirelli classification with 46 points, while Ziad Gandour of Lebanon leads the Trofeo Pirelli AM classification. As for the Coppa Shell classification, Xin Jin from China leads the standings after a hard-fought battle in Sepang.

Fans visiting the grandstand on Sunday, 26th April will have an opportunity to receive an original Ferrari Racing Days Fuji 2015 T-shirt to support the team. Tickets are available on a dedicated website http://frd.ferrari-japan.co.jp with free entry to view the exciting races and be a part of the world of Ferrari. The free Fan Pass can be downloaded from the official website, which will allow everyone access to the event.